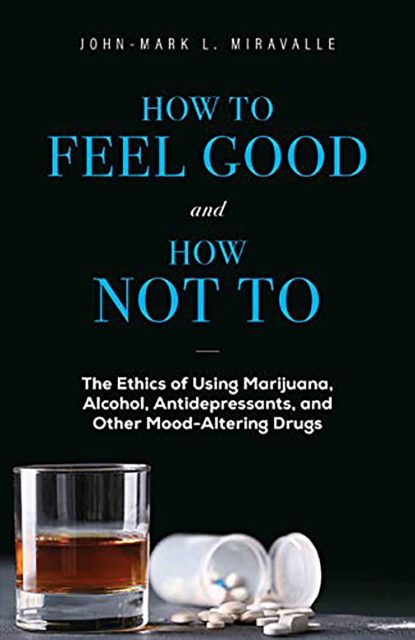 This is the cover of the book “How to Feel Good and How Not To: The Ethics of Using Marijuana, Alcohol, Antidepressants, and Other Mood-Altering Drugs,” by John-Mark L. Miravalle. The book is reviewed by Patrick T. Brown. (CNS photo/courtesy Sophia Institute Press)

“How to Feel Good and How Not To: The Ethics of Using Marijuana, Alcohol, Antidepressants and Other Mood-Altering Drugs” by John-Mark L. Miravalle. Sophia Institute Press (Manchester, New Hampshire, 2020). 144 pp., $14.95.

A certain genre of buddy comedies in the 2000s, usually featuring the talents of comedians like Judd Apatow or Seth Rogen, often featured marijuana as a reliable source of presumed hilarity.

And as marijuana has slowly become legal in more jurisdictions, getting high on pot is increasingly becoming less a laugh line than a recreational choice for millions of Americans. Though still illegal at the federal level, cannabis is currently fully legal in 15 states and the District of Columbia for recreational and medical use and 33 other states have legalized medical marijuana.

But how should a Catholic think about marijuana use? Is it closer to legal substances like caffeine and alcohol, or to harder drugs like opiates?

“How to Feel Good and How Not To,” by John-Mark Miravalle, offers a heavily Thomistic framework for thinking through this question.

His slim but solid exploration of the ethics of using marijuana, alcohol and antidepressants doesn’t give any insights in the knotty political questions about how to treat drugs in law but does illuminate some of the theological dimensions in the individual choice to partake in them.

Miravalle, a professor of systematic and moral theology at Mount St. Mary’s Seminary in Maryland, spends the first half of the book comparing America’s most widely used drug, alcohol, with the new kid on the block, marijuana. In his account, intent matters greatly — “Drugs can simulate delight, they can create an artificial sense of delight, they can make you think you’re having delight — but they can’t give you delight.”

Using marijuana, like any drug, is an attempt to trick yourself into a good time, rather than true enjoyment and relaxation, he claims.

He tries to distinguish between the two substances, arguing that while marijuana is deliberately consumed to alter one’s mental state, alcohol is consumed primarily for its taste and not for its effects on the mind (nonalcoholic beers, he posits, simply don’t taste as good).

He even unearths a quote from St. John Paul II: “While the moderate use of (alcohol) as a drink does not violate moral norms, and hence only its abuse is to be condemned, the use of drugs, on the contrary, is always illicit.”

To support his position, Miravalle conducts a thought experiment. If someone smoking marijuana didn’t feel any change to his mental state at all, he might assume he had a bad batch. By contrast, he argues, the point of drinking alcohol is not to get drunk. “In my circle at least, no one ever expresses any genuine disappointment that his emotional state wasn’t changing as the result of an alcoholic drink.”

Well, we’ll pardon the good professor if he hasn’t spent too many nights at the dive bar near campus. There is certainly an authentic pleasure from being handed a good cocktail that is distinct from the hazy buzz of too many mass-produced cold ones.

But America’s rates of alcoholism and liver disease suggest that the tendency to abuse alcohol is ever-present, and too many people are drinking for more than just the flavor.

To his credit, he admits that if drinking alcohol becomes “a matter of trying to engineer delight by chemically stimulating the brain, this kind of drinking is open to the same kinds of criticism I’ve leveled … against recreational marijuana use.” Whether that means we should treat alcohol more or less harshly in law than marijuana is left to the reader.

The second half of the book picks up anti-depressants, carefully but counterculturally. Miravalle makes a theologically informed case in defense of suffering, as both a signpost on the way to a deeper reliance on the Almighty and a spur to avoid bad behavior.

This informs his view that depression is more than just a chemical imbalance in the brain, but something in how our body and soul interact. As he points out, if you confuse alleviating the symptoms of depression (through anti-depressant drugs) with treating the source of the problem, you might also confuse alleviating the symptoms of seasonal allergies and curing it and assume cough drops are a medical cure.

But, he quickly points out, there are times when suffering can become disordered and recursive, an endless trap which immobilizes the sufferer and makes them feel that there is no way out of their depression.

In these serious cases, Miravalle argues, antidepressants can play an important role; not to be relied on as a first resort, but as part of an arsenal of interventions treating the whole person with the aim of restoring him or her to full health. Intervene when necessary, he counsels, but “don’t treat depression as though it’s only a physical problem.”

“How to Feel Good and How Not To” is an extremely accessible book, with no chapter longer than 14 pages. It won’t convince the addict or loosen up the teetotaler, and a few less rhetorical questions would have given the book a slightly less didactic air.

It also explicitly sets aside questions not only of policy implications, but the circumstances that can push people into using drugs. A section on the ethics of opioid use, for example, given the ongoing epidemic of opiate overdose deaths, would have been fascinating reading.

The closest the book comes to those questions is in an excerpt from an interview with Cardinal Joseph Ratzinger, before he became Pope Benedict XVI. “Drugs are a protest against facts. The one who takes them refuses to resign himself to the world of facts. He seeks a better world. Drugs are the result of despair in a world experienced as a dungeon of facts, in which a man cannot hold out for long. … Drugs are the pseudo-mysticism of a world that does not believe yet cannot get rid of the soul’s yearning for paradise.”

How much more interesting would Seth Rogen’s next film be if he explored that yearning on those terms?

PREVIOUS: ‘American Oz’ peeks into flawed wizard behind the curtain