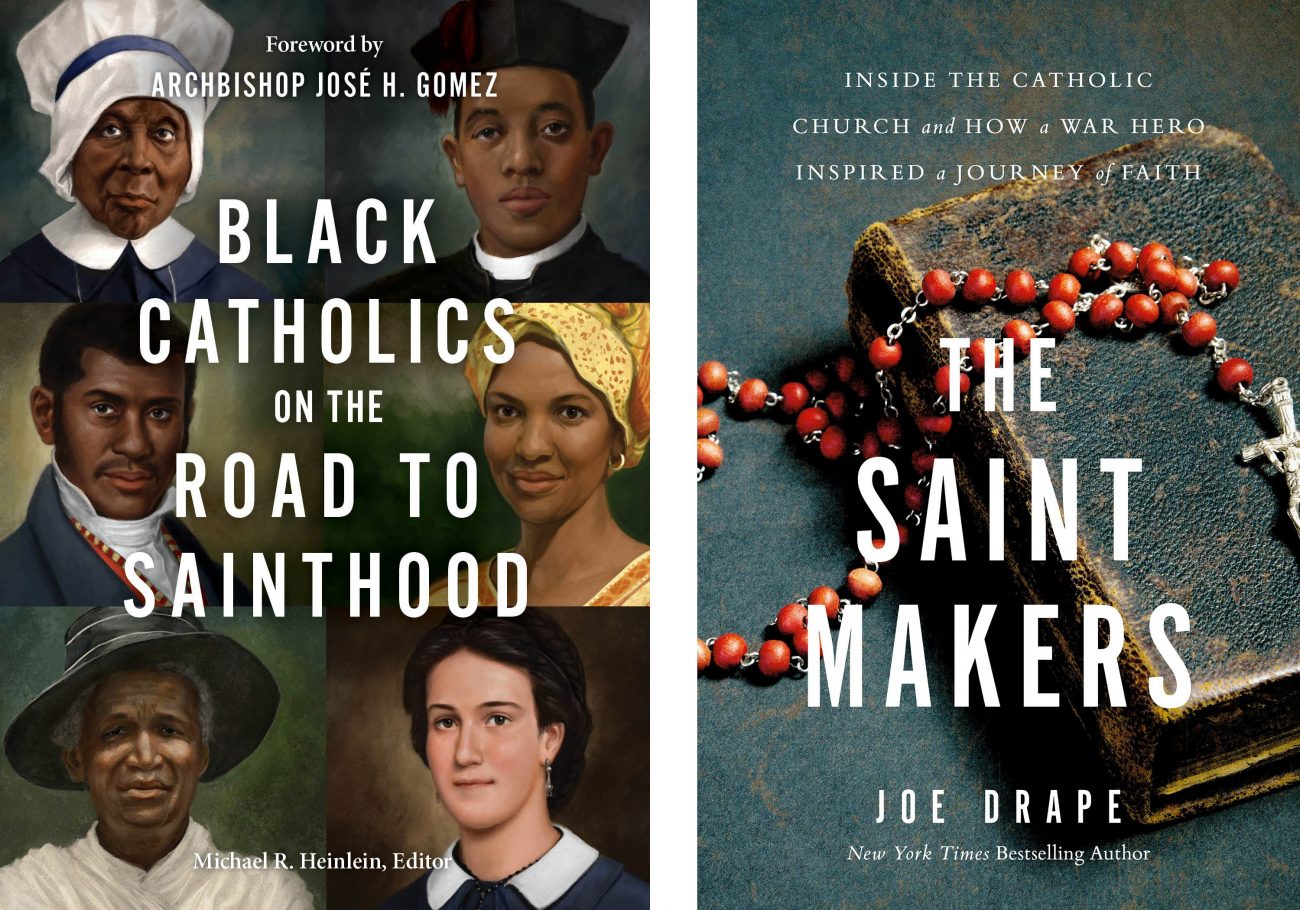 These are the covers of "Black Catholics on the Road to Sainthood," edited by Michael R. Heinlein; "The Saint Makers," by Joe Drape. These books are reviewed by Timothy Walch. (CNS composite/courtesy Our Sunday Visitor, HarperOne)

Sainthood. It’s a matter of faith that Catholics who die in a state of grace join the communion of saints in heaven. Indeed, the church has codified that recognition in the celebration of All Saints’ Day each Nov. 1.

For a few extraordinary Catholics, however, the recognition of sanctity takes a more public form. In a process known as canonization, Vatican officials examine the lives of certain Catholics to determine if they are, indeed, worthy of special commemoration. When the church is convinced of the truth of sanctity, the pope grants formal sainthood.

The process of canonization can be arduous, so supporters seek to advance these causes through books and articles. Two recent books offer insight into the process; both are informative contributions to our understanding of the canon of saints.

“Black Catholics on the Road to Sainthood” is a compilation of personal reflections issued by the publishing division of Our Sunday Visitor. Editor Michael R. Heinlein focuses on six African American Catholics recognized by the church for additional consideration.

All six led exceptional lives of service and sacrifice and have been recognized as either “servants of God” or “venerable,” the first two steps on the road to canonization. “By their stories of faith and virtue,” notes Heinlein, “they show us how to respond to the call of holiness, bringing healing, reconciliation and peace to our wounded nation and world.”

This is a timely book that emphasizes the importance and contributions of people of color to our nation and our church. The book includes numerous testimonials from prominent Black Catholics as well as a foreword by Los Angeles Archbishop José H. Gomez, president of the U.S. Conference of Catholic Bishops.

“The Saint Makers” by Joe Drape provides a different approach to canonization. A Jesuit-educated journalist, Drape concentrates on the cause of Father Emil Kapaun, a priest of the Diocese of Wichita, Kansas, and a military chaplain during the Korean War.

Drape begins his journey with an introduction to Father Kapaun as a parish priest in Kansas and as member of the Chaplain Corps. With the onset of the Korean conflict, Father Kapaun joined the 1st Cavalry Division on the field of battle.

On the evening of All Saints’ Day, 1950, Father Kapaun and other members of his battalion were captured by Chinese troops. Even though he was a prisoner, Father Kapaun never stopped being a priest; his bravery and leadership provided great solace to his fellow prisoners.

Father Kapaun carried on for the next several months but shortly after Easter his health declined. He was malnourished and a blood infection put his life in peril. Dysentery further compounded his suffering, but still he ministered to his men. The Chinese took him away on May 21 and two days later he was dead. The body was dumped in a mass grave without ceremony.

Although gone, Father Kapaun was not forgotten among Korean War veterans and they worked tirelessly to bring his heroism to public attention after the war. Their penultimate achievement came when the priest, who held the rank of captain, was awarded the Congressional Medal of Honor April 11, 2013.

Father Kapaun’s legacy of compassion also led to another honor. For several years, church officials in Wichita compiled documentation on Kapaun’s life and sanctity. This effort led to Father Kapaun being declared a “servant of God” in 1993.

The balance of Drape’s book traces the campaign to take the cause to the next stage and convince the pope to declare Father Kapaun to be “Venerable.” This effort required additional research and the employment of a special canon lawyer to plead the cause. Drape traces this effort up to March 20, 2020, when Kapaun’s documentation was to be presented formally to the Vatican.

Unfortunately, the pandemic put Father Kapaun’s cause on hold and he still has the title “Servant of God.” A declaration he is “Venerable” would confirm he led a life of heroic virtues.

In general, the canonization process requires confirmation of two miracles occurring through the sainthood candidate’s intercession. The first would give Father Kapaun the title “Blessed,”and with the second he would be declared a saint.

On March 4, 2021, the U.S. Defense Department announced the identification of Father Kapaun’s remains among those returned from Korea to the United States in the 1950s and 1960s. He is interned among the men he served at the U.S. military cemetery in Hawaii.

Why is the process of canonization so important? Drape asks that question of one Vatican official, and the response was plain and rings true. “We all need models of sanctity,” Drape was told. “They are the best images of Christ. They are the best of all of us. That is why we need saints.”

Walch is a historian of American Catholicism and the author of “Parish School.”

PREVIOUS: What would St. Thomas Aquinas think of marijuana?

NEXT: ‘Voyagers’ take a long and not very interesting trip