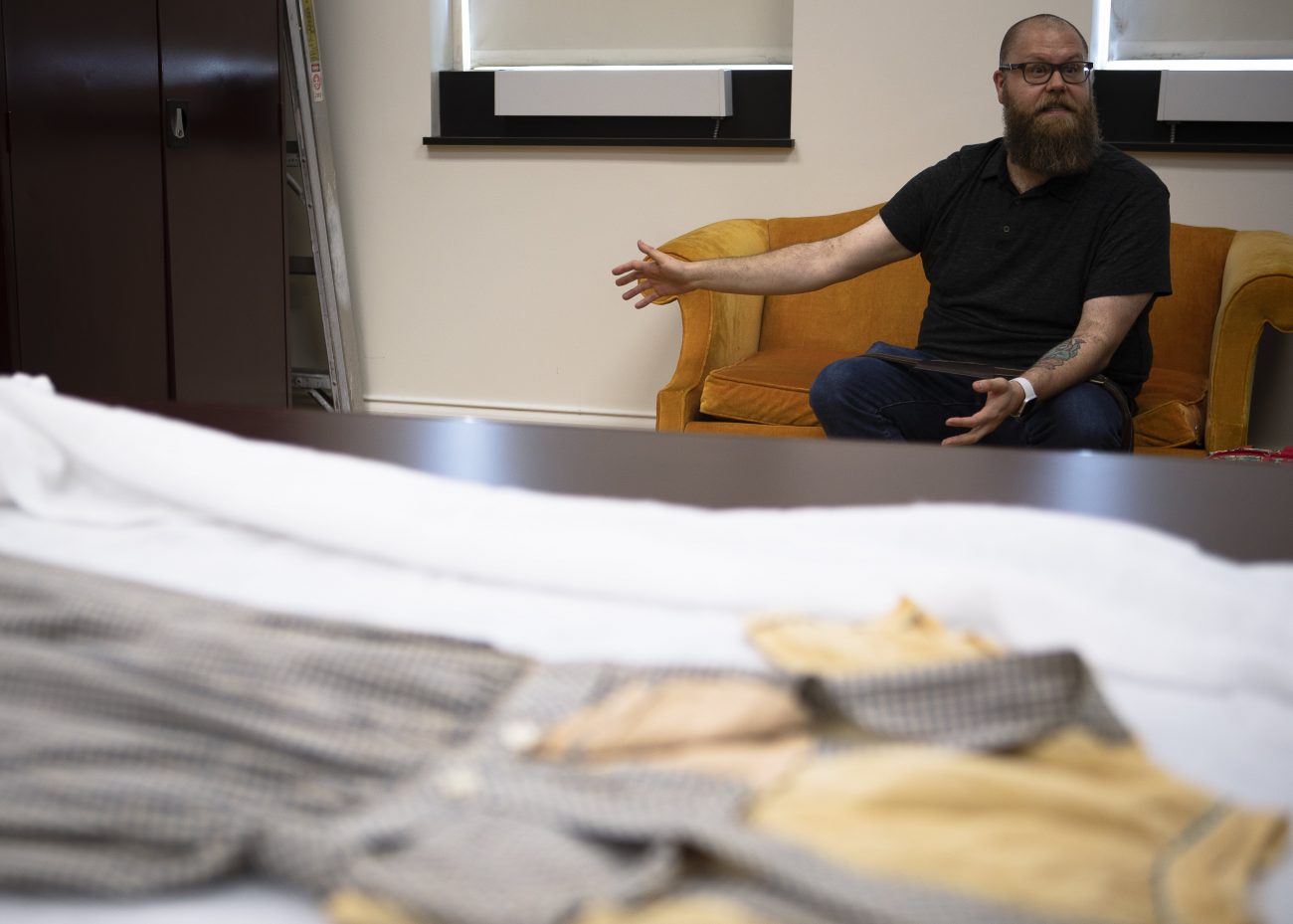 Matt Ripa, director, producer and teacher in the drama department at The Catholic University of America in Washington, discusses with Catholic News Service July 7, 2021, how he stumbled upon the dress worn by actor Judy Garland in the 1939 movie "The Wizard of Oz." (CNS photo/Tyler Orsburn)

WASHINGTON (CNS) — It turns out there really is no place like home for a prized piece of movie memorabilia that came to The Catholic University of America’s drama department about 50 years ago.

Missing for decades, the university’s long-rumored possession of the blue gingham dress worn by Judy Garland as Dorothy in “The Wizard of Oz” showed up without much Hollywood fanfare this summer in a white trash bag stashed high in a theater department’s office.

The rediscovery of something that had almost seemed legend in the drama department, — except for photos of it and descriptions from people who remembered seeing it — echoes a theme taken right from the classic 1939 movie.

Dorothy promises never to look for her heart’s desire “any further than my own back yard” after likely taking to heart the wizard’s advice that everything she was “looking for was right there with you all along.”

In early June, in preparation for renovation work to start on the university’s Hartke Theater, a department faculty member sorting through things noticed a white trash bag above the faculty mail slots. Inside it was a green shoe-sized box whose contents needed no explanation for Matt Ripa.

Ripa, a lecturer and operations coordinator in the university’s drama department, took one look inside and seeing the faded blue squares and the aged yellowing blouse of the classic film dress, he began laughing hysterically. 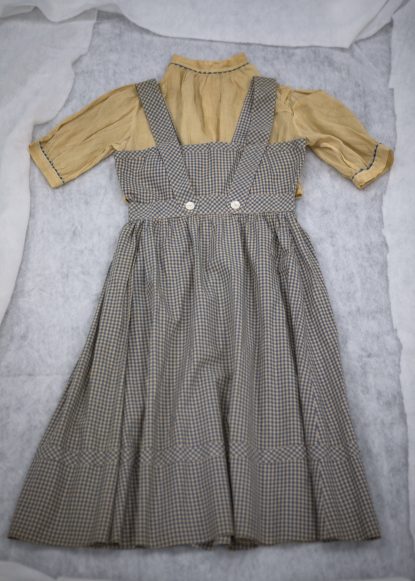 The dress worn by actor Judy Garland in the 1939 movie “The Wizard of Oz” is seen at The Catholic University of America in Washington July 7, 2021. (CNS photo/Tyler Orsburn)

For the past seven years, since he started working at the school where he earned his graduate degree, it’s been his personal mission to find this dress. It was given to Dominican Father Gilbert Hartke — founder of the drama department and namesake of its theater — in 1972, two years before he retired.

There are pictures of the priest holding the dress and showing it to faculty members but after he died in 1986 no one knew what became of the iconic costume.

Ripa had looked for it in the theater’s archives and storage closets and had essentially given up hope of finding it, so its unexpected appearance was a pretty welcome surprise. He and a co-worker got some gloves, held the dress up and took pictures and then called the university’s archive department with the news: “We have Judy Garland’s dress!”

The piece of movie history, one of six original dresses believed to be in existence, was a gift from Mercedes McCambridge, an actress and friend of Garland’s, who was artist-in-residence at the university in 1972-1973.

McCambridge won an Oscar for best supporting actress in “All the King’s Men” in 1949 and was nominated for the same award for the 1956 film “Giant,” but she became perhaps even more well-known for being the voice of the demon child in “The Exorcist” in 1973, even though Warner Brothers failed to credit her for the role.

A 1973 article in the campus newspaper, The Tower, said she donated Garland’s dress to be a “a source of hope, strength and courage” to the students.

The writer pointed out that in a small way it also answered Garland’s expressed regret that she hadn’t gone to college and her questions if “it all could have been different” if she had. “Judy’s fantasy has come true. A real part of her has made it to college,” the article said.

Although no one knows how McCambridge came to own the dress, it doesn’t seem unusual that she gave it to Father Hartke. Maria Mazzenga, curator of the university’s American Catholic History Collections, noted the priest’s flair for the unique, saying he also owned a silk jacket from India, a 6-foot-long aviator scarf and a Russian fur hat.

“People gave him clothes because they knew he would like it,” she said. 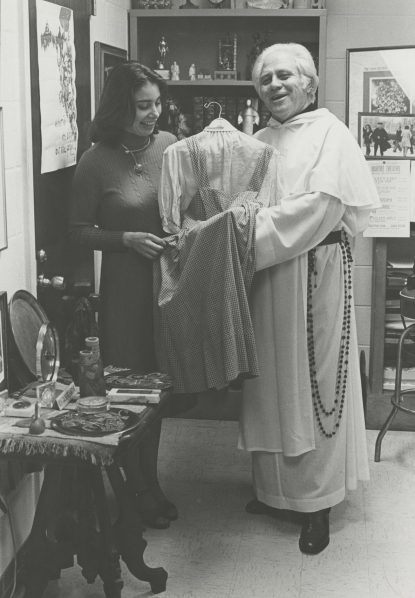 The priest, a playwright and director who started the university’s theater department in 1937, also was instrumental in Washington theater efforts and civil rights advocacy. He was friends with U.S. presidents from Harry Truman to Ronald Reagan and was one of two priests called to stay with the body of President John F. Kennedy at the White House prior to his funeral.

This renewed connection with Father Hartke through the famous dress is what pleases Ripa most.

He admits he is not a huge “Wizard of Oz” fan, so he hadn’t gone overboard for its link with the iconic film. Instead, what he loves is how the dress reminds him of the drama department’s history.

Talking to Catholic News Service July 7 right alongside the famed-dress — now safely stored in a temperature- and humidity-controlled environment — he said he has enjoyed all the comments Catholic University alumni have made on social media about the famous finding after he initially posted it.

“It reminds you: You are in a special club and Father Hartke was the coolest,” he said.

Ripa is pretty sure the dress turned up now because a retired drama department professor discovered it while doing some pandemic cleaning out and sorting. A note taped to the bag said: “I found this in my office.”

Once the dress was in the careful — and gloved — hands of the university’s archives department, the job of verifying its authenticity began.

Mazzenga reached out to experts in cultural memorabilia at the Smithsonian’s National Museum of American History which has several “Oz” items — including its famous pair of Dorothy’s ruby red slippers — on display. Museum officials who came to the campus measured the dress and looked it over meticulously. 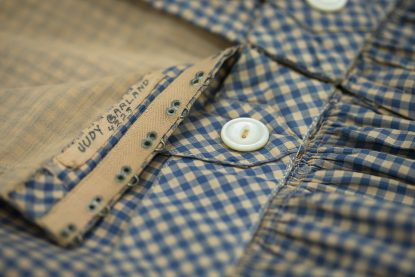 The dress worn by actor Judy Garland in the 1939 movie “The Wizard of Oz” is seen at The Catholic University of America in Washington July 7, 2021. (CNS photo/Tyler Orsburn)

They are not authorized to authenticate objects like this one, Mazzenga said, but they could say with confidence that this dress, like the other five in existence, had the same verifiable characteristics: a secret pocket, Judy’s name written by hand in similar script on a label and tears in the blouse’s thin material.

For now, school archivists are planning long-term conservation of the dress, which they say is too valuable to put on display. They also are responding to questions from the pretty big and very curious “Wizard of Oz” fanbase.

One person who appreciates the school’s find and its longtime connection with the dress is Steph Twomey, a 2015 graduate of Catholic University who has been playing Dorothy since 2017 at the theme park “Land of Oz” in Asheville, North Carolina.

“This. Is. INSANE!” she commented on an Instagram post about the find by the university’s archives department.