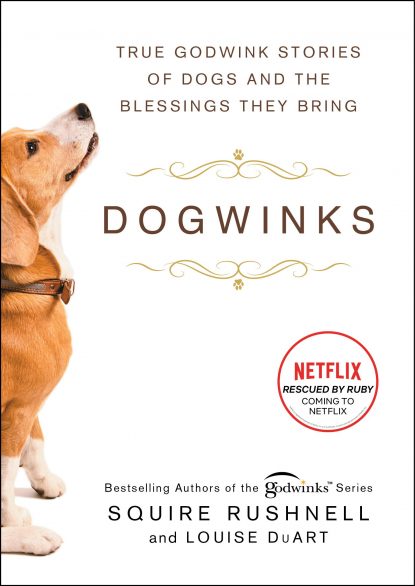 This is the cover of the book “Dogwinks: True Godwink Stories of Dogs and the Blessings They Bring,” by SQuire Rushnell and Louise DuArt. The book is reviewed by Regina Lordan. (CNS photo/courtesy Howard Books)

“Dogwinks” is a collection of remarkable, heartwarming short stories highlighting that nothing is impossible with God, and that sometimes his blessings are even more apparent with dogs along life’s twists and turns.

Written by SQuire Rushnell and Louise DuArt, authors of the best-selling “Godwinks” series, the book features epic tales of heroic canines, second chances and seemingly serendipitous encounters. However unbelievable but true, each dog story represents a little wink from God, an acknowledgment that he is present in the lives of humans.

No strangers to storytelling, the married authors know exactly how to develop characters without too much distracting detail or frivolous language.

Rushnell is a former television executive who can take credit for more than 75 Emmy awards under his leadership, and DuArt is a comedian, speaker and former host of a daily talk show on the ABC Family channel.

Stories from Rushnell’s “Godwinks” series appear routinely on the NBC “Today” show, so it won’t come as too much of a surprise the “Dogwinks” vignettes seem fit for the screen. One particularly charming story about Ruby, a valiant rescue dog, is soon to be an original Netflix movie.

Ruby was an unwanted, mischievous shelter dog destined to be put down until her energies were channeled into search and rescue missions. Her skills eventually resulted in her saving the life of someone quite incredibly connected to Ruby’s survival.

All of the dogs, or as the authors like to call them, “God’s furry friendly agents on earth,” are representative of so much that is to be celebrated about faith: mercy, service, compassion, hope and love. The dogs’ companionship and bravery exemplify that God does have a plan for all of us, and if he is in control, remarkable things can happen.

Take, for example, Landon and Bogart. Landon was born with a cleft palate. Just as he was becoming more aware of his physical differences, he met a puppy named Bogart. Bogart, too, was born with a cleft palate and needed special care and patience simply to be fed. Bogart became Landon’s dog, and theirs is a symbiotic relationship of survival and love.

Then there’s the tale of Booga, his owner, Mac, and his hardened friend Gerry. Booga is a champion retriever and Gerry a firm nonbeliever. After storm waves toppled their small boat, Booga and Gerry struggle to tread water while trying to keep afloat an ailing Mac. Gerry tries to give Booga swimming breaks by lifting him up by his collar, but eventually orders Booga to swim to shore so that Gerry can focus on saving Mac. Although Gerry acknowledges the dog might not make it, he knows this might also be Booga’s only chance for survival.

Feeling utterly desperate, Gerry calls out to God, begging for a second chance at a relationship with him and for life itself. Moments later, a boat named Second Chance spots their bobbing heads in the water, and the men are saved. Back on shore, the exhausted retriever appears from the marsh after surviving a treacherous swim. With a not-so-discreet answer to Gerry’s prayer, both dog and man got second chances at life.

Miraculous reunifications abound in “Godwinks.” There’s Muff, a Dalmatian lost during a tornado who was found by her owners after years of abuse, and Reckless, a pit bull mix who was reunited with his family after being lost during Hurricane Sandy.

The dogs in the book also gently help their humans cope and heal. Each story includes a short reflection tying the dogs’ journeys into God’s plan, making it ever more obvious that dog spelled backward is God, as the authors (and dog lovers) point out. The dogs are mirrors of God’s love.

“Dogwinks” is a sweet book to digest after a long day, like a warm cup of tea with just enough honey and milk. Easy enough for an older child to read, “Dogwinks” is appropriate for all audiences.

Lordan, a mother to three young children, has master’s degrees in education and political science and is a former assistant international editor of Catholic News Service. She currently teaches and is a court-appointed advocate for children in foster care.

PREVIOUS: Iconic Dorothy dress has been there ‘all along’ at Catholic University

NEXT: ‘Sophie: A Murder in West Cork’ shows life’s fragility