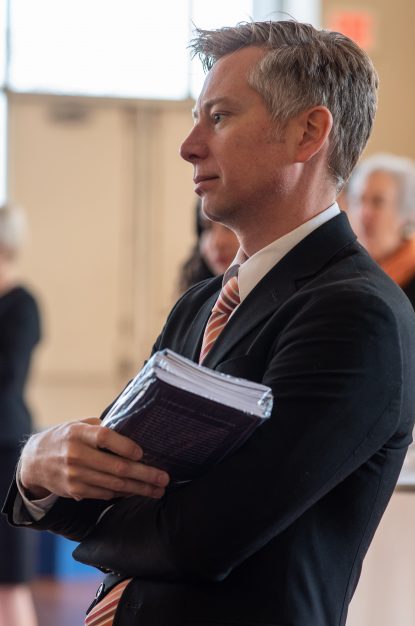 James Matthew Wilson, a veteran poet, educator and cultural critic, is a Catholic writer who is trying to promote the church’s literary treasure trove to a much greater and more appreciative audience. He is pictured in an undated photo. (CNS photo/courtesy James Matthew Wilson)

Helping establish a Catholic literary arts program at Houston’s University of St. Thomas can be considered a vocation of sorts for James Matthew Wilson.

A veteran poet, educator and cultural critic, Wilson is a Catholic writer who feels a special need to promote the church’s literary treasure-trove to a much greater, more appreciative audience.

“Our aim is to serve and inspire the ongoing revival of Catholic letters in our time,” Wilson said in April, announcing the startup of the new literary arts program.

The program, which will offer master’s degrees in fine art, is entirely online, which means the co-founder can oversee its operation from his native Michigan, rather than from Houston. He recently resettled in Grand Rapids, Michigan, where he attends St. Thomas the Apostle Parish.

He was raised in St. Thomas Aquinas Parish in East Lansing, and his experience at the local school there finds frequent expression in a series of poems Wilson prepared to mark the anniversary of Catholic missionary efforts in early American history.

Wilson is gratified to report that interest in the fine arts program has skyrocketed.

“This is tremendously good news, as I can now campaign to build the size of our faculty and make further proposals to donors to get more fellowships for our students,” Wilson said.

Administrative efforts aside, Wilson has long discerned his creative inspiration. His earlier literary efforts concentrated on prose fiction, and while he enjoyed some success in that area, he soon gravitated to poetry.

“I admired the filigreed intricacy of meter and rhyme,” Wilson told Catholic News Service in describing his evolution as a poet. “I stood in awe of the long conversation poets had conducted within the tradition going back to Homer and Hesiod. That dual sense of making a perfectly crafted work and one which joined in filial, imaginative engagement with other works I loved drew me away from prose fiction toward the casual writing of sonnets for leisure and, later, toward a sense of poetry as a vocation.”

In a series of interviews with CNS, Wilson discussed his views on poetry and its poorly understood significance not only as a form of literary arts, but also as an expression of devotion.

“My poetry and my faith are deeply connected,” Wilson said. “I was a serious writer before I was a serious Catholic. When I saw how literature shines a light on truth, how it opens us to reality, to being, and that it reveals the intelligible order that governs these things, I was forced to confess that Catholicism had been saying as much all along and was the only possibility for an intellectually serious person. There are many other connections, but this is the fundamental one.”

Wilson seeks a hearing among Catholics of traditional, conservative and classical sensibility who have had limited exposure to contemporary poetry.

“These audiences are frequently enthusiastic ones. They have found the mainstream of contemporary literature obscure and abysmal and turned their attentions elsewhere, but they usually have a love of our classics of literature. When I show them that there is a considerable number of poets writing now who engage the traditions they love, most in a way a sensible person can appreciate, they are grateful.”

As of the summer of 2021, Wilson has published 10 books, among them four collections of poems. His poems, essays and reviews appear regularly in a wide range of magazines and journals.

Wilson rejects any suggestion that his attitude to “Catholic” poetry and art are little more than an apology for orthodoxy or a rigid defense of traditional church teaching.

“For students in our program, we have but two requirements: that they be committed to the making of a good work and that they seek to do so in some meaningful sense with the resources of the Catholic tradition,” he said.

Wilson also sees the fine arts program as a form of shelter to those who love the church and the truth in its fullness.

Of the more than 200 poems Wilson has written, he has special feelings for “A Prayer for Livia Grace,” a selection from his collection, “Some Permanent Things.” The poem is a man’s confession of being “de-centered” by fatherhood. Livia Grace is the name of Wilson’s oldest daughter.

The poem focuses on a child’s fragile infancy “as a monumental revelation that we are called to permanence, called to cling to a truth that lasts forever. We are not called to live cozy, hygienic lives of moderate self-indulgence balanced with physician-prescribed physical fitness.”

While Wilson is keen to garner fresh appreciation and understanding for poetry, he also sets high standards for its creators. As a fine art, the business of poetry is to reflect and manifest reality.

“But it is not so serious as the church’s business,” he said. “All the fine arts play an important role in the life of the Christian and the church, not least because the fine arts prepare us for the sacred arts, those works of art that are made use of in the liturgy. I don’t want to pretend that poetry alone or poetry most of all has a singular role in our spiritual life. It is the case, however, that a flourishing intellectual and devotional culture will be one where devotion is deepened by theology, philosophy and the fine arts.”

Wilson’s efforts to promote a renewed appreciation for poetry and fine art extend beyond his teaching and his work with the fine art program at the University of St. Thomas. He is also director of The Colosseum Institute, which, in conjunction with the Franciscan University Press, publishes new collections of poetry and literary criticism focusing on Catholic letters. Colosseum also runs a summer institute for poets and fiction writers dedicated to the philosophy of art and beauty in the Catholic tradition.

Wilson also serves as poetry editor at Modern Age quarterly and as poet-in-residence at the Benedict XVI Institute, an organization promoting a renewal of Catholic culture in the arts.

Mastromatteo is a reporter and book reviewer based in Toronto.

NEXT: Like teen of its title, ‘Dear Evan Hansen’ plumbs deep well of emotions