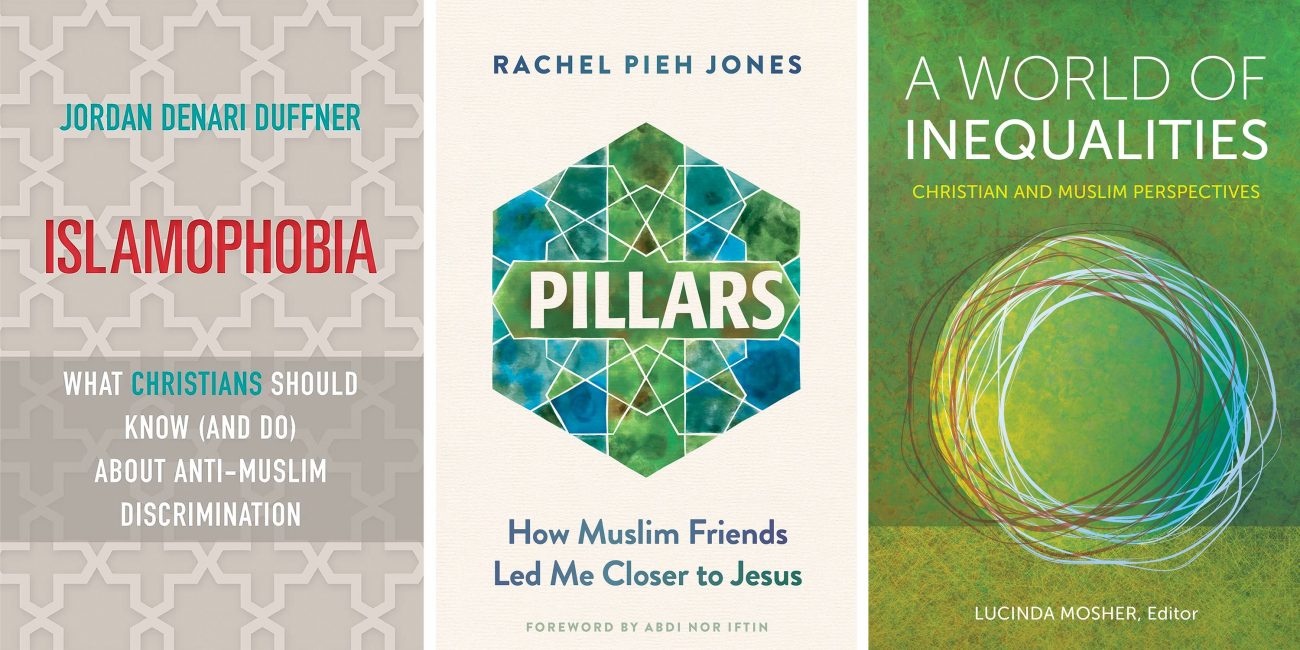 These are book covers for "Islamophobia: What Christians Should Know (and Do) about Anti-Muslim Discrimination" by Jordan Denari Duffner; "Pillars: How Muslim Friends Led Me Closer to Jesus" by Rachel Pieh Jones; and "A World of Inequalities: Christian and Muslim Perspectives," edited by Lucinda Mosher. The books are reviewed by Eugene J. Fisher. (CNS composite/courtesy Orbis Books, Plough Publishing, Georgetown University Press)

“Islamophobia: What Christians Should Know (and Do) about Anti-Muslim Discrimination” by Jordan Denari Duffner. Orbis Books (Maryknoll, New York, 2021). 243 pp., $22.

I recommend all three of these timely books for anyone who wishes to understand the history and present reality of Christian-Muslim relations both within this country and around the world.

The title of Rachel Jones’ “Pillars” echoes the five basic pillars of Muslim faith: There is no god but God, prayer, almsgiving, fasting and pilgrimage.

The book is a personal journal, organized in five sections reflecting the pillars, of the author’s life in the heart of Africa, Somalia, where she and her husband moved to take part in a humanitarian effort to help the local Muslim inhabitants to learn more and achieve a better lifestyle.

She and her family endured many difficulties, from being looked down upon and excluded to fears of the violence that killed three of her Christian friends. But Muslim women come to her aid, teaching her how to interact with Muslim women and men, and bringing her family into their homes so she could better understand.

Jones and her Muslim friends journey together through the Muslim year, learning about each other through dialogue, listening to each other and, hesitatingly, praying together to the one God whom Christians and Muslims both worship.

This very personal story will introduce readers to Muslim religious traditions and, more importantly, to people with whom readers can relate and learn from.

“Islamophobia” details the present-day reality of a negative and largely false set of ideas about Muslims and Islam that has been part of Christian culture since at least the Crusades.

Ignoring what the holy book, the Quran, which is largely based upon the Hebrew Scriptures and the New Testament, actually states, Islam is portrayed as a religion that sees itself as having replaced Christianity and Judaism and is aimed at their destruction and creating a totalitarian structure to take over and rule the world.

Muslims are depicted as anti-women’s rights, as racists and evil slaveholders, as if Christians never “owned” slaves. While some Muslims might hold such views, and some Muslim societies have reflected them, this is not what the Quran teaches.

We Catholics, and Christians in general, have equally been guilty of such departures from the teachings of Jesus. So we must learn not to scapegoat Muslims by blaming them for the faults of our own history, and to a sad extent, the present.

The final third of the book, “Crafting a Christian Response,” provides the reader with a number of things Catholics and all Christians can do today to break the cycle of fear/hate of Muslims, both individually and communally.

Author Jordan Denari Duffner notes the good things that the Holy See has done but argues, correctly in my view, that more can and should be done.

On the communal level, parishes can reach out to mosques and Muslim groups to engage them in dialogue and work together with them to create local organizations to help those in need, the poor, the elderly and the sick.

If Christians and Muslims can learn about each other in direct conversations, we will be able to see that the essential values of Catholic social theology are mirrored in the teachings of Islam, and we can work together in solidarity to benefit the larger society, our nation and the world.

The author concludes with this understanding that it is possible to work together to “build the kingdom of God.”

“A World of Inequalities” might be better titled “Toward a World of Equalities.” The book contains the papers presented at the 2018 meeting of the Building of Bridges Seminar, the 17th in an ongoing series of such meetings.

After overviews by Ovamir Anjum and Jesuit Father David Hollenbach on the challenges facing Islam and Christianity today, scholars delve into the challenges of gender, race, nationality and ethnicity, sociopolitical equality, caste and social class, and slavery, both historically and in the present.

The final articles go into the possibilities for interreligious work to build bridges that might bring us together to create “a common ethic of equality” and a “shared theology of human development.”

Together, these books on Islamophobia and inequality/equality provide the basis for profound and hope-filled dialogues between Muslims and Christians on the international, national and local levels. Again, highly recommended!

NEXT: Game holds ‘life is strange’ in search for ‘true colors’