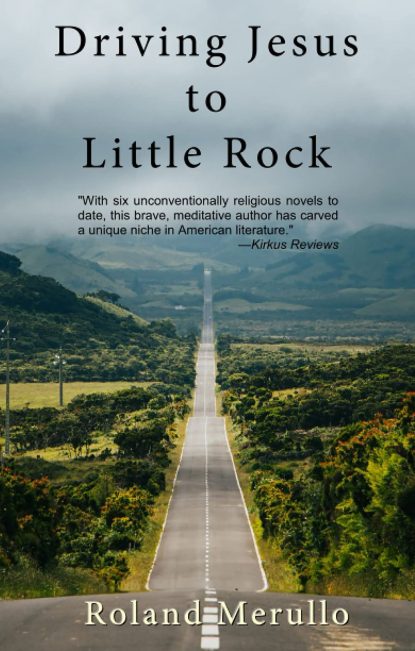 This is the book cover of “Driving Jesus to Little Rock” by Roland Merullo. The book is reviewed by Mike Mastromatteo. (CNS photo/courtesy PFP Publishing)

Massachusetts-based writer Roland Merullo has a long-standing curiosity about the information gap in the life of Christ between his early years and the time of his passion, crucifixion and death.

Merullo’s latest novel, “Driving Jesus to Little Rock,” is the author’s attempt to fill that gap, while offering readers a lively imagining of what Christ might say and do should he come into the world in modern times.

With now 19 novels to his credit, Merullo dabbles in the realm of “quirky spiritual” fiction. His 2008 novel “American Savior” — outlining a funky Jesus Christ returning to earth to become a candidate for president of the United States — gave a foretaste of the author’s heavy emphasis on matters of faith, spirituality and transcendence.

The narrative in “Driving Jesus” is straightforward enough. It follows the path of successful but low-key author Eddie Valpolicella, preparing to drive to Little Rock, Arkansas, to give a lecture to a church group about an earlier book, “Breakfast with Buddha,” which outlines a contemporary man’s fictive interaction with the personified Buddha.

Merullo himself wrote “Breakfast with Buddha” back in 2007, so there is a clear overlap between the real Merullo and Eddie, his protagonist.

As Eddie sets out, he picks up a mysterious hitchhiker looking for a lift to New York City. As the title readily suggests, the stranger turns out to be Jesus Christ, and his sudden intrusion into Eddie’s life opens the door to a discourse about Christ’s unrecorded middle years.

Eddie’s skepticism and mistrust about his rider’s claims help ease some of the incredulity of this narrative scenario. And despite some contradictory and odd behavior on the part of his passenger, Eddie slowly comes to accept that the man/spirit sitting next to him is the real deal.

As the travelers near their destination, the Christ character reveals to the incredulous Eddie what he did and where he went during the missing middle years.

Merullo’s interest in Buddhism and Eastern spirituality has Jesus studying under Eastern masters and developing a full appreciation for the contemplative life, reincarnation and the general eschewing of material pleasures.

Catholic readers might have some problems with Merullo’s associating Christ’s middle years with an embrace of Eastern spirituality — some of which, like reincarnation and atonement for past lives is inconsistent with church teaching. But this is an otherwise thought-provoking and inspirational piece of fiction.

Merullo’s key message, voiced through a modern Christ returned to earth in the 21st century, is simply this: It is not what you believe, but how you behave that makes all the difference.

As the Jesus character tells Eddie toward the book’s subtle but moving denouement:

“Humans — self-centered creatures that you are — cannot learn, cannot make spiritual progress without suffering. Suffering, pain, misfortune, disappointment, frustration, illness — those things are endured for various reasons. Yes, in some cases, it is a consequence for having done evil in a past life. Yes, in some cases, a person is born Black, or female, or poor, or rich, or ill because he or she wasn’t compassionate enough to members of those groups in a previous life.”

Mastromatteo is a writer and book reviewer from Toronto.