New priests honored at Mass as part of ‘beautiful tradition’ 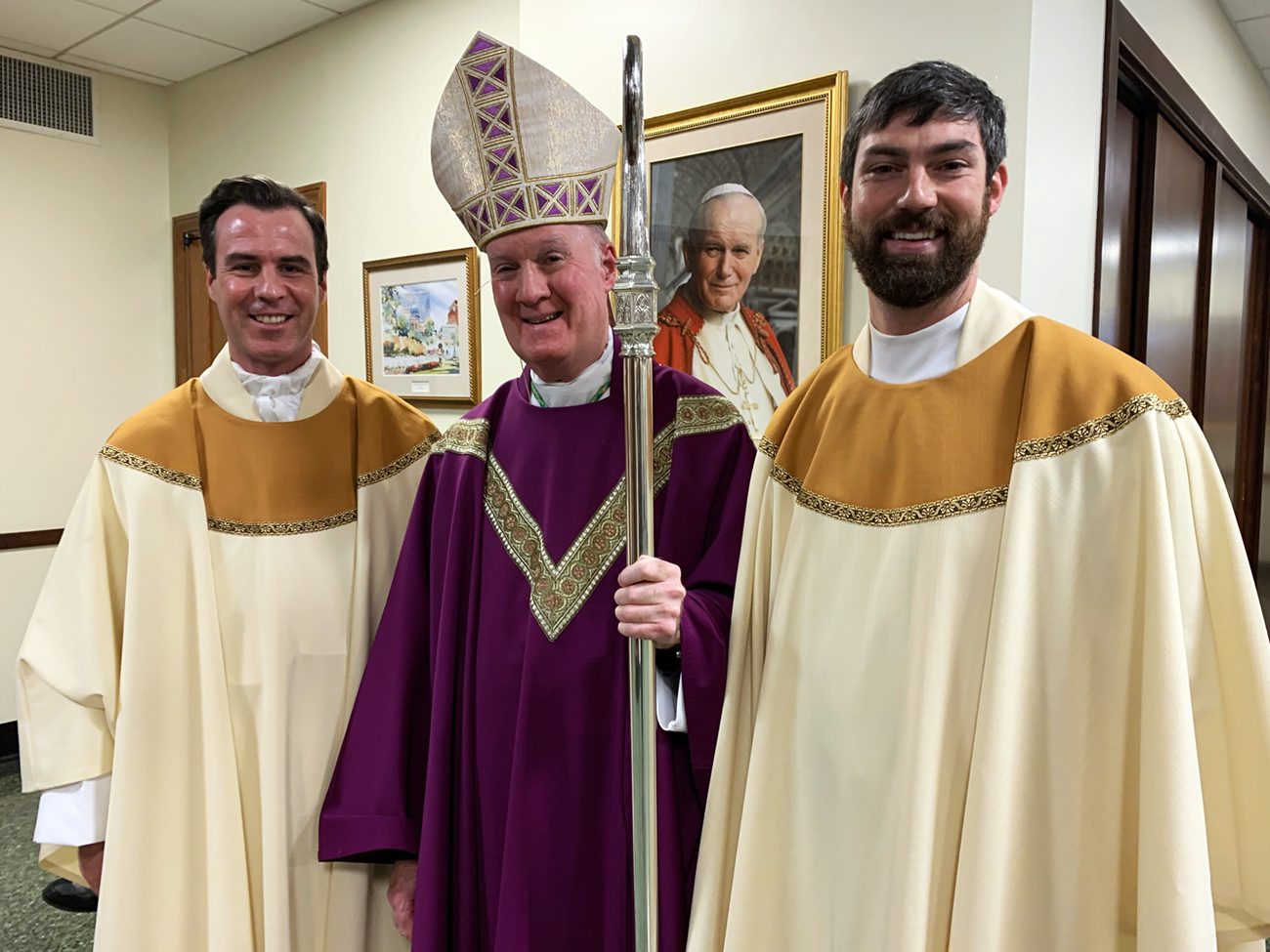 Auxiliary Bishop Michael Fitzgerald was the principal celebrant and homilist at a Dec. 2 liturgy hosted by the Serra Club of Philadelphia at the Cathedral Basilica of SS. Peter and Paul. Part of Serra International, the club is comprised of Catholic lay men and women who promote and support vocations to the priesthood and consecrated life.

The Mass, concelebrated by several archdiocesan priests, revived what Bishop Fitzgerald, a former Serra chaplain, called a “beautiful tradition” in the Philadelphia Archdiocese of publicly welcoming newly ordained priests to the area’s Catholic community — and this year, Father Kenneth Cavara and Father Mark Tobin, who received holy orders in May, were the liturgy’s special guests.

“It’s a remembrance of that day when we received the grace of ordination, and a reminder of the support of the people in our future ministry,” said Father Tobin, a parochial vicar at Mary, Mother of the Redeemer Parish in North Wales.

Father Cavara agreed, adding he was touched to see among the estimated 75 attendees members of St. Monica Parish in South Philadelphia, where he is a parochial vicar.

“It just reminds you of the goodness of the people, and how much support you have when you’re answering a call to serve as a priest and share in the priesthood of Christ,” he said.

Both priests described celebrating Mass as an extraordinary experience.

“Obviously, we’re still so new, but it’s wonderful and joyful,” said Father Cavara. “You realize how transcendent the Mass is.”

Father Tobin said it is “a privilege and a blessing” to be immersed in “the mystery of the Mass and the mystery of … ordination,” and “to nourish the people in word and sacrament.”

“Especially at Mass, I’ll remember you, your need, your loved one who is perhaps sick or who has passed away,” he said. “It’s a gift to be able to offer the greatest prayer that we have, entering into Christ’s offering and his prayers.”

Priests are “called to lead the people to a deeper understanding of Christ … and to give (them) a deeper insight into the meaning and purpose of their Christian identity,” said Father Tobin.

At the same time, it’s “very human” for young men discerning a priestly vocation to experience “fears, doubts and concerns,” he added.

“The Lord understands and meets us there,” he said. “Knowing the Lord is with us gives us a reason to take courage and follow him.”

That’s exactly what Joshua Brooks, a senior at Msgr. Bonner and Archbishop Prendergast Catholic High School, is setting out to do.

Brooks, who was on hand for the Serra Mass and luncheon, said he wasn’t even Catholic when he began discerning a possible call to the priesthood. Raised as a Baptist, he attended our Mother of Sorrows-St. Ignatius of Loyola School in West Philadelphia and became “intrigued” by the Catholic priesthood.

“What interested me was learning about Catholic theology and the priest’s role,” said Brooks. “And it made me want to pursue it.”

Through prayer and vocation awareness outreach, the Serrans are there to help, said Jorge Ignacio Fernandez, president of the Serra Club of Philadelphia.

Fernandez said he believes “there is a resurgence to the priesthood,” and that amid “turbulent times” the word of God is calling men to religious life.

Don’t hesitate to heed that call, which is “not just about you, but also about the mission of Christ and the church,” said Father Cavara.

The rewards of trusting in God, “who only has our best interests in mind,” are well worth it for those discerning a vocation to the priesthood, he added.

“If they could spend one day in my shoes, they would never go back to their own,” said Father Cavara.

To learn more about discerning a vocation to the priesthood, visit the website of the Archdiocese of Philadelphia’s Vocation Office for the Diocesan Priesthood.

To learn more about the Serra Club, visit the organization’s website.

NEXT: Priest’s ‘yes’ to God changed his life, for good of his parishioners