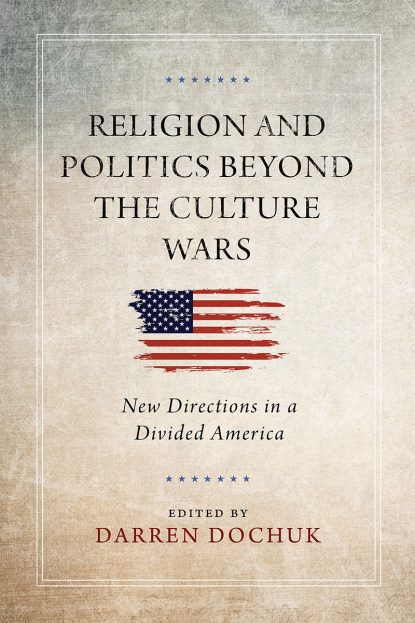 This is the book cover of “Religion and Politics Beyond the Culture Wars: New Directions in a Divided America,” edited by Darren Dochuk. The book is reviewed by Agostino Bono. (CNS photo/courtesy University of Notre Dame Press)

Mixing religion, politics, the culture wars and division in America can make for an explosive cocktail in a country where many people see issues — and often the people espousing them — in black and white.

This worsened during the presidency of Donald Trump, who demonized opponents and used ridicule more than arguments to shoot down ideas.

The result is today’s society in which such hot-button topics as abortion, immigration, race, climate change and who can use which public bathroom are treated as a tug-of-war producing only winners and losers.

This book — a collection of 14 essays mostly by academics — doesn’t solve any problems, but it shows that divisions and culture wars are nothing new in a society where religion and politics often combust. The difference today is a more polarized citizenry.

The essays avoid dealing directly with current incendiary issues or — in some cases — how they are framed today. Instead, many essays delve into the previous century and the beginnings of this one to show how various religious communities and individuals intertwined with politics on key issues such as the Cold War and the environment.

Sometimes the issues divided different religions or produced splits within some, such as opposition to the Vietnam War. The essays are based on presentations at a 2014 “Beyond the Culture War” conference at Washington University in St. Louis.

As these are essays, there is no common thread running through the book nor is there a clear formula as to how religion and politics can go beyond culture wars and heal divisions. But individual essays present some interesting facts.

Early in the previous century there was a struggle as to who should lead Christian workers in their labor struggles: the workers themselves or clergy arbiters.

Catholics, Jews and some Protestants were favorable to immigration. Other Protestants were opposed, however, because it would open the door to more southern European Catholics in a country considered white Anglo-Saxon Protestant now and forever.

One tantalizing essay shows how the CIA recruited Catholic and Protestant missionaries on overseas assignments as spies.

But it commits an enormous historical error. It says a CIA-aided Catholic movement helped replace Chilean Marxist President Salvador Allende with a Christian Democrat president. Allende was overthrown in 1973 by a military coup that inaugurated a brutal military regime headed by Gen. Augusto Pinochet.

Perhaps the most interesting fact to emerge in the book is the difficulty in tagging people with preconceived political labels even in divisive times. Many Catholics, especially priests and nuns, were actively engaged in Vietnam War protests, an activity considered politically liberal at the time.

Yet, they strongly opposed abortion, considered a conservative view, but didn’t align themselves with the anti-abortion Republican Party. Their reason for both positions was the same: opposition to the destruction of human life.

The book, while not offering solutions to today’s dilemmas, indicates that we may learn some lessons about polarization and culture wars by studying the past.

PREVIOUS: ‘The 355’ shakes up James Bond storyline with heroines