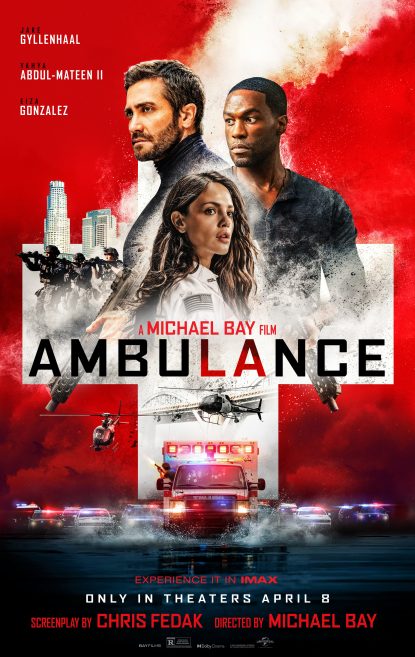 This is the movie poster for “Ambulance.” The Catholic News Service classification is L — limited adult audience, films whose problematic content many adults would find troubling. The Motion Picture Association rating is R — restricted. Under 17 requires accompanying parent or adult guardian. (CNS photo/Universal)

Despite some flaws, this remake of a 2005 Danish film is ethically intriguing. But harsh and problematic elements render it fit for hardy adult moviegoers only.

Instead, Danny cajoles Will into participating in his latest heist. But the holdup goes badly awry. In the resulting confusion, the siblings hijack an ambulance and take hostage both paramedic Cam Thompson (Eiza González) and her patient, an LAPD officer named Zach (Jackson White) whom Will earlier accidentally shot.

As Will demonstrates the driving skills he acquired while under fire on the streets of Kabul, he and Danny match wits with local Capt. Monroe (Garret Dillahunt) and FBI agent Anson Clark (Keir O’Donnell). Cam, meanwhile, struggles to keep Zach alive.

Through it all, Will wavers between the decency embodied by Cam and the desperation to which Danny has been driven in his desire to escape justice. The story charted in screenwriter Chris Fedak’s script is sometimes farfetched, and the atmosphere of the movie occasionally overheated. Yet, despite also going on too long, the picture does maintain viewer interest.

The audience for which this thriller is suitable, however, is a small one. Some of the violence is gory and a gruesome sequence showcasing on-the-fly surgery is certainly not for the squeamish. Throw in a steady cannonade of swearing and the depiction, albeit in passing, of Anson’s gay civil marriage and the result can only be endorsed for grown-ups game to take on challenging material.

NEXT: With a good heart and dirty mouth, ‘Father Stu’ inspires