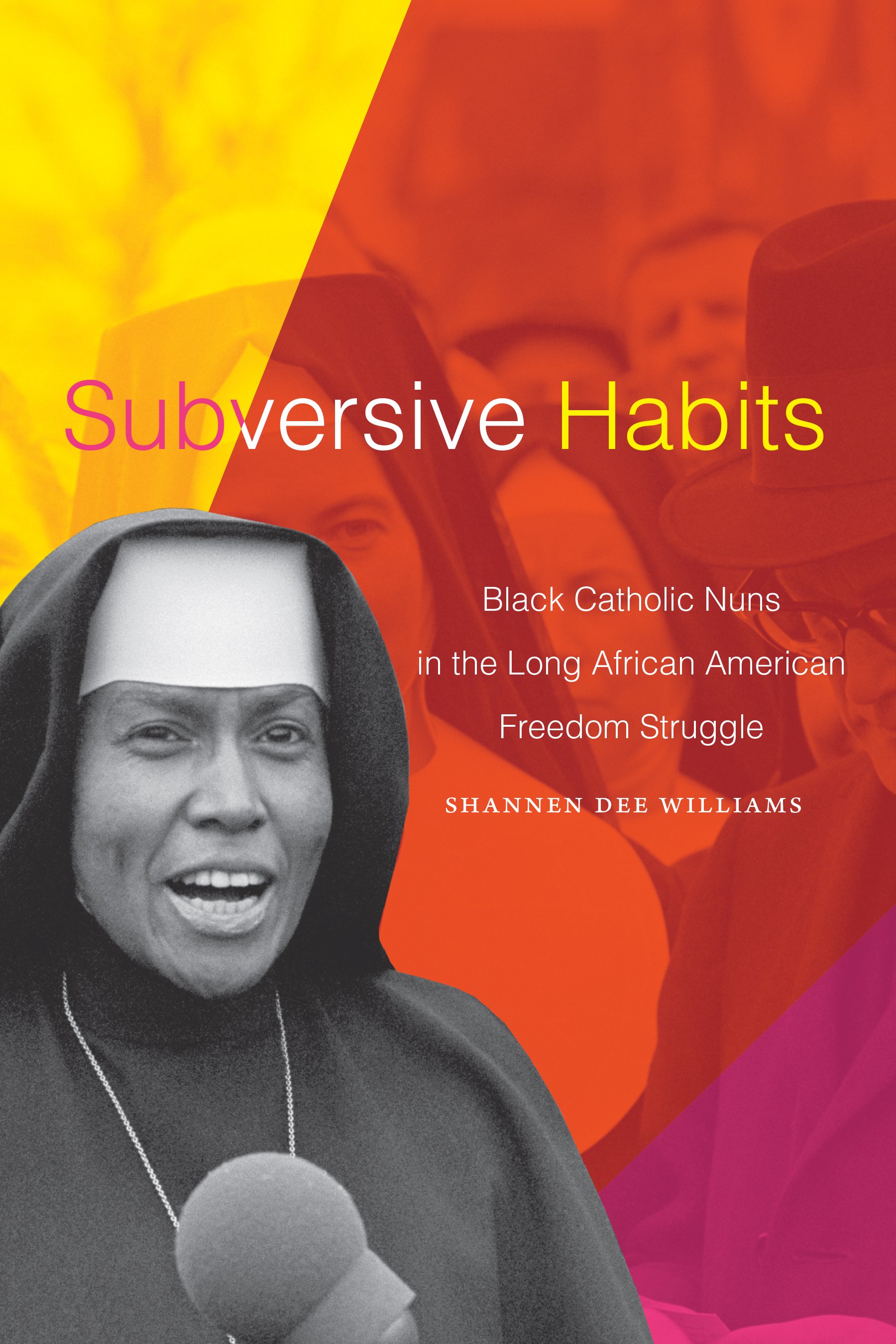 This is the book cover of “Subversive Habits: Black Catholic Nuns in the Long African American Freedom Struggle” by Shannen Dee Williams. The book is scheduled for publication May 2022. (CNS photo/Duke Press)

Her book, “Subversive Habits: Black Catholic Nuns in the Long African American Freedom Struggle,” which comes out in May, is the result of more than a dozen years of research and oral history interviews.

It recounts not only how Black sisters were front-runners in pushing for desegregation in society at large but how they also had to do that on a very personal level in their push to get accepted into predominantly white religious orders and to persevere in their vocation when some of them endured not just prejudice but outright bullying in these orders.

Williams, an associate professor of history at the Marianist-run University of Dayton in Ohio, and a columnist for Catholic News Service, interviewed women religious and pored through the archives of many congregations for her work.

Putting all of it together gets to some “true truths,” she said, using one of Sister Thea Bowman’s expressions. The Franciscan Sister of Perpetual Adoration pioneered the rights of Black Catholics and her sainthood cause is being considered by the Vatican.

In a February interview, Williams said the idea for the book sprang from her own lack of awareness of Black sisters and once she started looking into them, she unearthed stories that had long been kept silent and women who were eager to share them.

These are stories we need to champion, the author said, “not only within the church but also within our society,” noting these women religious are the “forgotten prophets of American Catholicism and democracy.”

Williams said the stories are painful in many ways because they seem to go against who Catholic sisters are but she says recounting them is part of a first step toward healing. She said many of the sisters she spoke with told her they were glad someone was interested and had been waiting for someone to come to them.

She presented some of her initial findings at a 2016 assembly in Atlanta for the Leadership Conference of Women Religious, saying she needed help with this project. Several communities stepped forward and one gave her a grant.

In recent years, she has been invited to speak to congregations across the country about how to look into and address their own links with racism. Some have started this examination by scouring their archives for details of excluding or mistreating women of color or relying on the labor of enslaved people.

Williams has urged congregations to recognize that “every community story is different” and that they need to find out exactly what they did. “You need to collect your own stories,” she’s told them.

“Just because a white community is willing to educate Black children does not mean that they are automatically committed to racial justice,” Williams said, noting that some religious communities had “anti-Black admissions policies” in place prior to desegregation laws.

The untold number of Black women who were rejected from religious orders are lost vocations that the church should reckon with, Williams said.

But also, if a congregation accepted a Black woman, it didn’t mean they were “being racially progressive,” she added.

Part of what pioneering Black sisters went through, including Sister Bowman, were abuses “designed to drive them out of religious life,” Williams said, stressing that these stories are painful but imperative to hear.

For example, she said some orders that allowed Black sisters would not touch their utensils or use the same cups. They also required Black sisters to profess their vows separately in segregated ceremonies.

She said that was the experience of Sister Antona Ebo, a Franciscan Sister of Mary, known for marching with the Rev. Martin Luther King Jr., in his 1965 march on Selma in Alabama. The sister, who died in 2017, also spoke out in 2014 at protests in Ferguson, Missouri, following the shooting death of a Black man by a white police officer.

Sister Antona’s training and profession of vows took place separately from the white women who entered the order at that time.

The stories Williams heard from Black sisters who experienced prejudice and white sisters who witnessed it shows “heartbreak, built on top of heartbreak on top of heartbreak.” Acknowledgment of what happened is a first step, she noted, followed by a hard look at what it means to make some type of reparation for how this has harmed the church.

Williams acknowledges that reparation it is a big undertaking with no clear-cut direction on how to do it. For her part, as an educator, “historical truth-telling” is a beginning, and only that. It does not give congregations a pass to admit something bad happened and move on.

She said several congregations have started the work of reckoning with their own histories and also joining with groups fighting for racial equality, but there still is a long way to go.

As she sees it, women religious can ultimately support the “freedom campaigns of the contemporary period” and all Catholics who want to reckon with the church’s history can as well.

She said the models for the church now come from primarily Black congregations, such as the Oblate Sisters of Providence, who have been working for racial equality for close to 200 years and give “the blueprint for how we want to be.” Williams noted they have always essentially been living out the slogan “Black lives matter” in their work.

The determination and persistence of Black orders and sisters, long ago and still today, is something Williams has faced straight on.

“It’s been with me a long time. So it’s great to finally share it,” she said.

PREVIOUS: Gritty but genuine, ’61st Street’ leads to a battle for survival