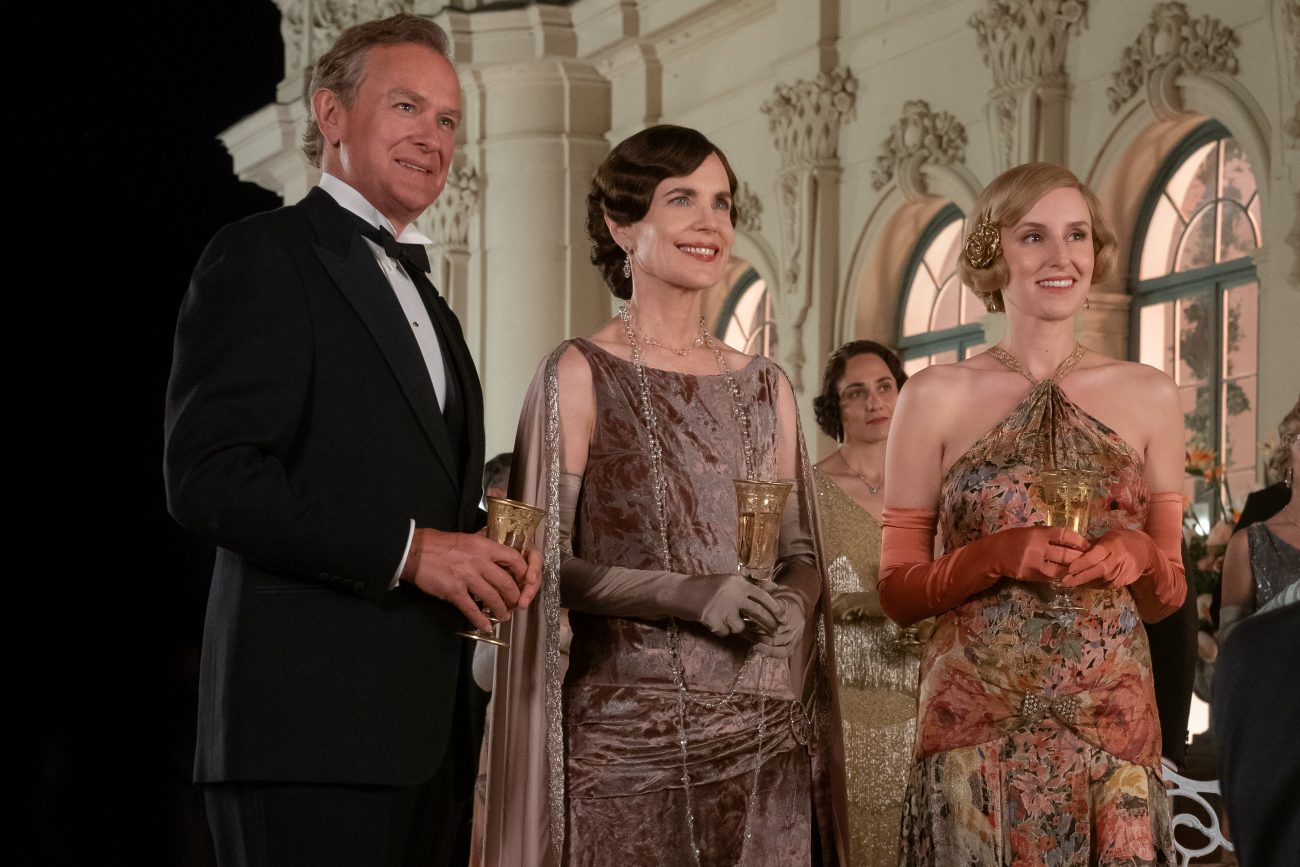 Elizabeth McGovern, center, and Laura Carmichael, right, star in a scene from the movie "Downton Abbey: A New Era." The Catholic News Service classification is A-III -- adults. The Motion Picture Association rating is PG -- parental guidance suggested. Some material may not be suitable for children. (CNS photo/Ben Blackall, Focus Features)

NEW YORK (CNS) — It’s been three long years since Maggie Smith’s tart-tongued matriarch, Violet Crawley, Dowager Countess of Grantham, got off one of her memorable zingers. So it must be time for “Downton Abbey: A New Era” (Focus).

In fact, what with pestilence and a war having beset the world in the meantime, many will think a return to the lush surroundings of the titular grand manor positively overdue. They’ll be grateful to find that screenwriter Julian Fellowes weaves his magic once again with this second film adaptation of his landmark ITV and PBS television series.

In the first movie, the household — both above stairs and below — was set astir by a visit from King George V and Queen Mary. This time out, Downton plays host to the cast and crew of a silent film, led by director Jack Barber (Hugh Dancy). He offers the Crawleys, in return for the use of their house, a sum sufficient to repair Downton’s leaky roofs.

Initially, the servants — headed by butler Thomas Barrow (Robert James-Collier) — are mostly agog to meet the movie folks. But they’re disappointed to find that, although leading man Guy Dexter (Dominic West) is amiable enough, his co-star, glamor girl Myrna Dalgleish (Laura Haddock), albeit beautiful to look at, is a rude Cockney upstart.

Conveniently for Downton’s owners, Robert, the Earl (Hugh Bonneville) of Grantham, and his countess, Cora (Elizabeth McGovern), they’re offered an opportunity to evade the impending home invasion when the demise of an old beau of Violet’s leaves her in possession of his seaside villa in the South of France. So, the couple — with several other family members in tow — decamps for the Riviera.

Thereafter, the story follows parallel lines. While the traveling Crawleys tangle with the resentful widow (Nathalie Baye) of Violet’s former flame but befriend her more accommodating son (Jonathan Zaccaï), Robert and Cora’s elder daughter, Lady Mary (Michelle Dockery) — a semi-abandoned wife who now supervises the Downton estate — stays behind to oversee the film shoot, during which Jack falls hard for her.

As directed by Simon Curtis, Fellowes’ script affirms marital fidelity even in the face of neglect and celebrates the reconciliation of once-antagonistic relatives. It also depicts the affectionate bond that develops between Thomas and the Douglas Fairbanks-like Guy, who eventually invites Thomas to follow him back to Hollywood, with apt discretion and even ambiguity.

Indeed, Fellowes brings a Catholic sensibility to the picture’s treatment of same-sex attraction, with an emphasis on companionship over mere appetite, and a sympathetic view of the plight of homosexuals in the 1920s. Yet, the inclusion of this ongoing plot thread makes “Downton Abbey: A New Era,” like its predecessor, best for grown viewers — though some parents may deem it acceptable for older teens.

The film contains mature themes, including same-sex attraction and illegitimacy, and a couple of mild oaths. The Catholic News Service classification is A-III — adults. The Motion Picture Association rating is PG — parental guidance suggested. Some material may not be suitable for children.

NEXT: ‘Top Gun: Maverick’ is high-flying fun on big screen