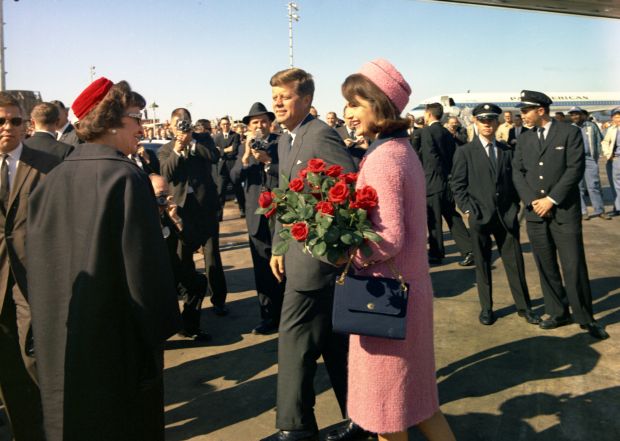 LOUISVILLE, Ohio (CNS) — Probably everyone who was alive Nov. 22, 1963, remembers where he or she was the day President John F. Kennedy was shot.

One Youngstown diocesan priest, the late Father Robert Brengartner, was present to meet the Kennedy family when they returned from Dallas to what was then called the Bethesda Naval Hospital near Washington.

In 1963, Father Brengartner, who spent more than 20 years of his priesthood as a Navy chaplain, was serving at the naval hospital, now called the National Naval Medical Center. He would often recount the story of his encounter with the Kennedy family that tragically fateful day, recalled Msgr. James Kolp, longtime friend of Father Brengartner.

Msgr. Kolp, who now lives at Emmaus House in Louisville, has a couple of boxes of newspaper clippings, photos, and other papers of Father Brengartner. He hopes to put together a book on his life.

“He was at a seminar at Georgetown University when he heard the news,” said Msgr. Kolp, retired pastor of St. Mary Parish in Massillon. Father Brengartner rushed back to Bethesda, Md., where he offered Mass at the chapel. Patients, doctors and nurses crowded in to pray.

“The admiral of the hospital asked him to meet the Kennedy family when the body was brought to Bethesda,” Msgr. Kolp told The Catholic Exponent, Youngstown’s diocesan newspaper. There, he met Jacqueline Kennedy along with the president’s brother, Bobby, and Bobby’s wife, Ethel.

“Jackie Kennedy had bloodstains on her dress and stockings,” Father Brengartner would recount. There was nothing he could say, but he stayed with them. When doctors were performing the autopsy on the president, Father Brengartner took the Kennedys into the chapel where they stayed three hours.

“Mrs. Kennedy asked him for a rosary, which he gave her,” Msgr. Kolp said.

Though the story stands out in his memory, Msgr. Kolp said, it is only one story in Father Brengartner’s life and ministry.

Ordained in 1942 for the Cleveland Diocese months after the Japanese attack on Pearl Harbor, Father Brengartner, a native of Cleveland, was first assigned to Our Lady of the Rosary Parish in Lowellville. The six counties of what is now the Youngstown Diocese were then part of the Cleveland Diocese.

“He served two years there but, as he saw so many young men going off to serve in the military, he approached Bishop (James) McFadden (Youngstown’s first bishop) to request that he be allowed to serve as a military chaplain,” Msgr. Kolp said.

Though a priest normally served a minimum of three years in his own diocese before becoming a military chaplain, Bishop McFadden made an exception, Msgr. Kolp said.

Father Brengartner enlisted as a naval chaplain, having grown up with dreams of being a naval officer, which he had put aside to follow his vocation to the priesthood. He served at Pearl Harbor from 1944 to 1946.

Returning after the war, Father Brengartner had two parish assignments, but he remained in the Navy reserves. After the Korean War broke out, he returned to active duty in 1951.

“He served with the Marines,” Msgr. Kolp said, and was decorated for his involvement in the rescue of a wounded serviceman. He later was assigned to Guantanamo Bay and eventually served during the Vietnam War. He was stationed at various bases around the world and achieved the rank of captain.

Father Brengartner returned to civilian life and parish work in 1971. His final pastorate was at St. Patrick Parish in Kent, where he was a beloved figure. “He was vibrant and fun-loving as well as a very spiritual man deeply committed to his faith,” Msgr. Kolp said.

After his retirement in 1982, Father Brengartner lived in the rectory at St. Mary in Massillon, when Msgr. Kolp was pastor. “He helped out whenever we needed him and was chaplain at the Indian River School,” a correctional facility that he visited weekly, Msgr. Kolp said. He remained at St. Mary until his death in 1999.

“He was a good friend and he loved the church and the people he served. Of course, he never forgot that day at Bethesda,” Msgr. Kolp said. “It was something that he had done before for other families and would do so many times for more families, regardless of who they were.

“It’s in the work of a priest,” Msgr. Kolp said. “Sometimes the words don’t come, but your presence says it all.”

Sheehan is editor and general manager of The Catholic Exponent, newspaper of the Diocese of Youngstown, Ohio.

NEXT: Dioceses solicit Catholics’ views in preparing for synod on family