‘When the Game Stands Tall’ gives reason to cheer 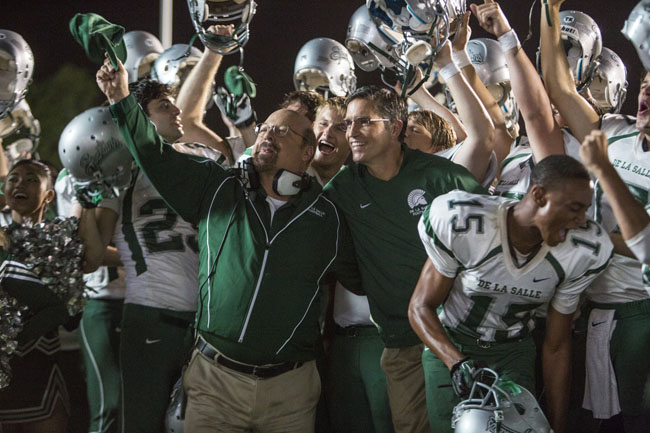 Michael Chiklis, Alexander Ludwig, center, and Jim Caviezel star in a scene from the movie When the "When the Game Stands Tall." The Catholic News Service classification is A-II -- adults and adolescents. The Motion Picture Association of America rating is PG -- parental guidance suggested. Some material may not be suitable for children.(CNS photo/Sony)

NEW YORK (CNS) — There’s little to object to and much to honor in director Thomas Carter’s idealistic fact-based sports drama, “When the Game Stands Tall” (TriStar).

Catholic viewers in particular will appreciate his recounting of events surrounding the record-breaking winning streak racked up by the football team of De La Salle High School in Concord, California, between 1992 and 2003. All the more so, since his film promotes humility, teamwork, good sportsmanship and, in passing, premarital chastity.

While good intentions and positive values carry the ball pretty far down the field, however, on this play, they don’t quite make it into the end zone. Score the result more likable than gripping.

The movie begins as the squad’s run of success is approaching a phenomenal 151 games. Dedicated coach Bob Ladouceur (Jim Caviezel) is naturally anxious to extend this string of victories. But, with faith as his primary motivation, his principal goal remains what it has always been: not gridiron triumph for its own sake but the molding of his players into upright young men.

As a new season begins, and De La Salle’s rising seniors struggle to lead their teammates on to further conquests, Bob’s single-minded commitment to his charges leads to tension with his wife Bev (Laura Dern) and son Danny (Matthew Daddario). Bev would like Bob to give more serious consideration to the lucrative job offers that keep coming his way from various colleges, while Danny is feeling neglected, despite his dual role as offspring and player.

A discreetly handled incident of street violence and a fleeting discussion concerning the degree of intimacy between defensive end Beaser (Joe Massingill) and his fetching girlfriend — via which we learn that they are mutually committed to sexual restraint — are about the only elements barring endorsement for moviegoers of all ages. Teens and their elders, however, will welcome the religious undertones in Scott Marshall Smith’s vulgarity-free script — which treats prayer and churchgoing as normative.

As earnest and amiable as its protagonist, “When the Game Stands Tall” offers modest but genuine entertainment along with valuable, Scripture-based life lessons. In today’s media market, that’s reason enough for parents to cheer.

The film contains brief bloodless violence, a few references to sexuality and a touch of mild scatological humor. The Catholic News Service classification is A-II — adults and adolescents. The Motion Picture Association of America rating is PG — parental guidance suggested. Some material may not be suitable for children.