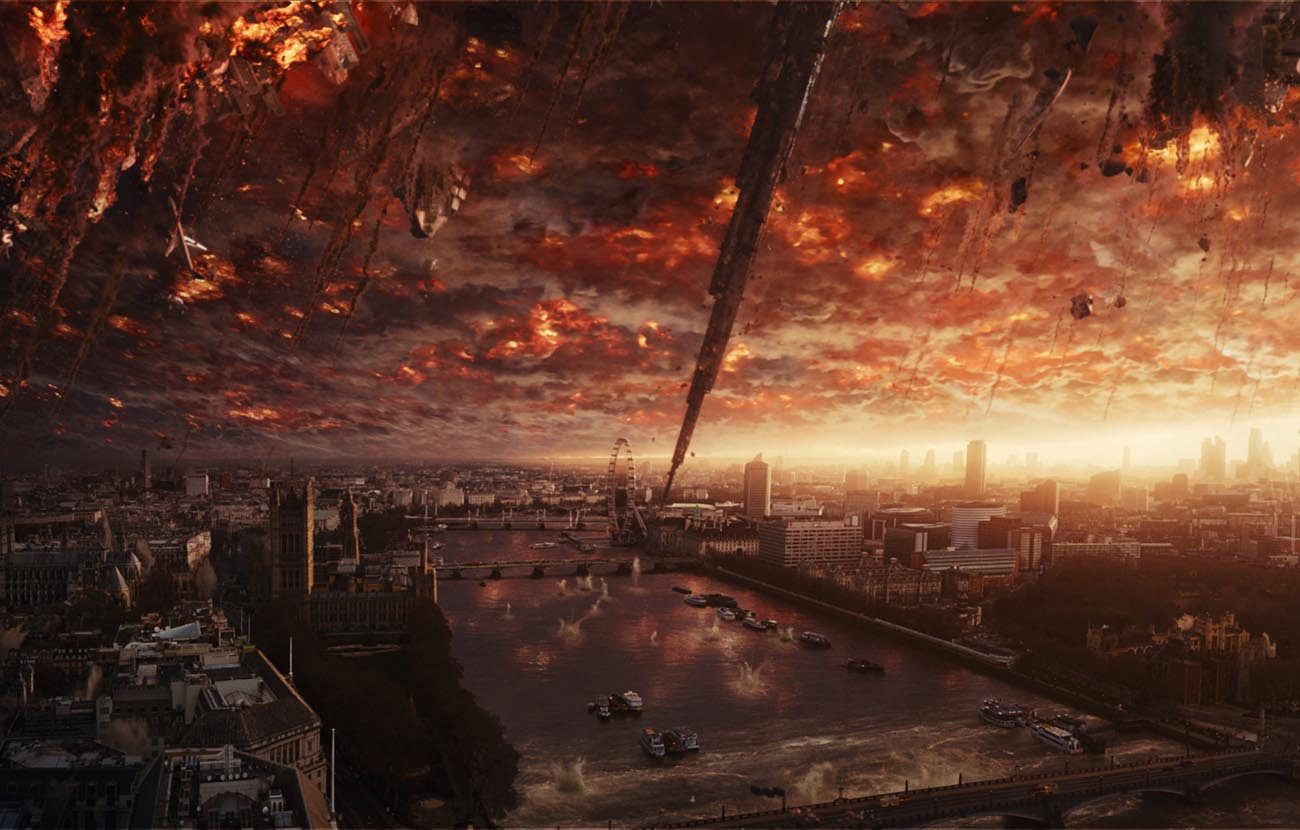 This is a scene from the movie "Independence Day: Resurgence." (CNS photo/Fox)

NEW YORK (CNS) — Something like pondering leftovers discovered in the back of the refrigerator, a movie studio decided, “Hey! This hasn’t gone bad!”

The result is “Independence Day: Resurgence” (Fox), a reprise of the hit alien-fighting epic of 20 years ago in which the nations of the world united to fight a common foe, led by an inspirational United States president and a swaggering fighter pilot.

In the pre-9/11 days, it all seemed like it might be possible. This sequel, though, just seems like an exercise in nostalgia for most of the actors from the original.

Will Smith’s pilot has died in the ensuing years, but his son Dylan (Jessie T. Usher) now also flies fighter aircraft. There’s also a new president, of course, President Lanford, played by Sela Ward, who is alarmingly trigger-happy when it comes to keeping the planet free of evil aliens.

The swagger in the skies this time is rebellious pilot Jake (Liam Hemsworth), who refuses to play by anyone’s rules. But he has a winning smile.

Wild-eyed scientist Brackish Okun (Brent Spiner) comes out of his 20-year coma to make fresh calculations to repel the invaders, and former President Whitmore (Bill Pullman) suffers torment from the “voice” of the alien leader in his head. “They’re coming back, and this time we might not be able to stop them!” he announces.

Engineer David Levinson (Jeff Goldblum) is among the first to detect the alien mothership sending signals before its return, and his father, Julius (Judd Hirsch), who has claimed all the credit for the first time the aliens were stopped, ruminates, “This may be bigger than before.”

The aliens’ mothership certainly is more immense, but the special effects, including the powerful beam that incinerated the White House in 1996, are just too familiar to delivery any jolts. This time, both London and Hong Kong are obliterated, but the mayhem all seems to be by rote.

Warlord Dikembe (Deobia Oparei), part of the international coalition united against the toothy alien force, finds that their laser weapons and continuous snarling anger are no match for his machete.

Instead of showing real human anguish, director Roland Emmerich, who co-wrote the screenplay with Nicolas Wright, James A. Woods, Dean Devlin and James Vanderbilt, is only interested in obliterating buildings and aircraft.

Language issues here aren’t so strong as to preclude mature adolescents, but they’re likely to be puzzled at the absence of cyber-warfare and the presence of thousands upon thousands of jet fighters.

The film contains action violence and fleeting rough and profane language. The Catholic News Service classification is A-III — adults. The Motion Picture Association of America rating is PG-13 — parents strongly cautioned. Some material may be inappropriate for children under 13.

PREVIOUS: ‘The Shallows’ menaces as the ‘Jaws’ of our time

NEXT: ‘Kirby Robobot’: fresh take on a gaming staple