WASHINGTON (CNS) — He doesn’t exactly advertise it, but the “king of Queens” is a Catholic family man. 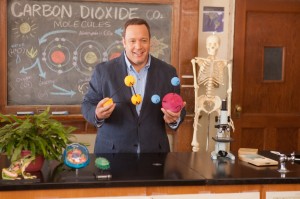 Kevin James is pictured in a scene from the movie “Here Comes the Boom.” The Catholic actor, who played Doug Heffernan for nine seasons on the CBS sitcom “King of Queens” and has since branched out into movies, says he no hesitation about discussing his faith and values and how that affects his career. (CNS photo/Sony)

Kevin James, who played Doug Heffernan for nine seasons on the CBS sitcom and has since branched out into movies, has no problem talking about his values and how it affects his career.

“I am involved in my faith, it becomes more and more — you know, it becomes a difficult, difficult position. You have a platform and you don’t want to do anything that doesn’t glorify God in every way,” James told Catholic News Service in a telephone interview from Philadelphia.

“I can’t play a priest in every film, either. You definitely want to have a positive message. I want to be able to sit and watch my movies with my children,” added James, who is married with two daughters and one son. Having control over and writing the material, according to him, is a key to “be inspiring and (to) move people in a positive way.”

James, 47, is promoting his upcoming film comedy, “Here Comes the Boom.” In it, he plays a high school science teacher who once loved his work but has “lost his mojo,” as he put it, but gets it back when budget cuts threaten the job of the music teacher (Henry Winkler), who never lost his love for teaching.

James’ character even goes so far as to train to be a mixed martial arts fighter — which James did in real life to prepare for the movie — in the belief that even a loser’s payday in such a bout will reap the bucks necessary to save the music program.

It’s not that James admits to some road-to-Damascus moment that made his faith all the more relevant to him. “I was born and raised Catholic and absolutely love my faith and learn more and more about it all the time,” he said. “It’s nice to have that going into whatever you do, whatever part of life you take upon yourself.”

It might have been, though, that James had his own lost-his-mojo moment. “I’ve been very guilty, a lot, of not knowing my faith too much and just praying when I needed it when something bad happened in my life and not being thankful when things turned good,” he told CNS. “The more I realized how important it is, the more I want to learn about it and do the right thing. All good is from him (God), and so I want to honor him. It’s honestly about learning more and instilling that in my kids and my friends, and those around me.”

Even before he hit it big on the small screen with “The King of Queens,” James was known as a standup comic who worked clean — but not necessarily as a byproduct of his faith. “It was easier to get on television and it was more universal” than using coarse language, he said. “I saw people who were kind of filthy in the clubs and they were very, very funny (in) what they were doing. But you weren’t going to be able to get on ‘The Tonight Show.’ I was selfish — I didn’t want to have to change my material.”

James has been in the public eye for 14 years, first with “The King of Queens” and a series of mostly hit film comedies including “Hitch,” “Paul Blart: Mall Cop,” “Zookeeper” and “Grown-Ups” and its sequel. What if it all comes to an end?

“There’s always that possibility,” James replied, “It’s his will, not mine. If it doesn’t happen, I’ve definitely had a great run. I’ll continue to do it, or find my path to something else. He’s given me the platform to do it. It’s great, yeah, I love it.”

PREVIOUS: ‘Looper’ shows violent future; logic is a casualty, too

NEXT: ‘Here Comes the Boom’ wrestles with Christian virtues in winning film