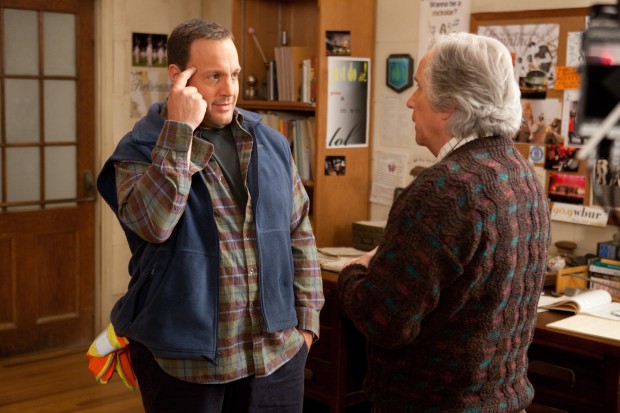 NEW YORK (CNS) — Perseverance pays off big time in “Here Comes the Boom” (Columbia), the unlikely yet inspiring tale of an ordinary man who goes to extraordinary lengths to help others.

Directed by Frank Coraci and starring Catholic actor Kevin James — who also co-wrote the screenplay with Allan Loeb — “Here Comes the Boom” is that Hollywood rarity, a film which extols Christian virtue. In this case the quality being showcased is self-sacrifice as James’ character displays the altruism needed to turn around a failing public school.

Scott Voss (James) is a washed-up biology teacher at fictional Wilkinson High School in Boston. A decade ago he was “Teacher of the Year”; today, he’s uninterested and bored — more baby-sitter than educator. The wicked Principal Betcher (Greg Germann) runs Wilkinson like a business, cutting salaries and activities at will.

(Related story: James discusses his Catholic faith in an interview)

Scott can’t even get the girl; Bella (Salma Hayek), the aptly named school nurse, repeatedly turns down his requests for a date.

What rouses Scott from his personal and professional slumber is the beautiful music being made in the classroom next door by his colleague Marty Streb (Henry Winkler) and Marty’s student orchestra.

Marty’s zest for teaching — and life in general — stirs something in Scott. So when Principal Betcher announces that the music program is to be eliminated — along with Marty’s job — Scott rises to the occasion, pledging to raise the $48,000 necessary to keep the activity in place.

At first, Scott tries to raise the funds by conventional means, moonlighting as a tutor for immigrants seeking to become U.S. citizens. One of his students, Niko (Bas Rutten), is a former mixed martial arts fighter (as is Rutten in real life). There’s big money to be had by entering the cage, Scott discovers, and taking on the sport which combines boxing, kickboxing, karate, judo and wrestling.

A one-time college wrestler, Scott decides to channel his inner “Rocky” and become a cage fighter. Despite being beaten to a pulp in each bout, Scott inspires his students and co-workers — especially Bella, who tenderly patches up his wounds.

Amid some extreme cage-fighting violence, “Here Comes the Boom” offers up a few welcome Christian references.

A crucifix hangs above Scott’s bed. He gathers his support team together in prayer before the big fight. And around the dinner table, his fellow fighters discuss the Bible, admiring Jacob’s all-night wrestling match with the angel as recounted in Chapter 32 of the Book of Genesis. Jacob lost that battle — but ultimately won out through faith in God and submission to his will.

“Here Comes the Boom” reaches a similar resolution, albeit with more humor and a much louder soundtrack.

The film contains realistic martial arts sequences, a brief scene of gross-out humor and one instance of crass language. The Catholic News Service classification is A-II — adults and adolescents. The Motion Picture Association of America rating is PG — parental guidance suggested. Some material may not be suitable for children.