With ‘Breaking Dawn 2,’ Twilight saga comes to an undead end 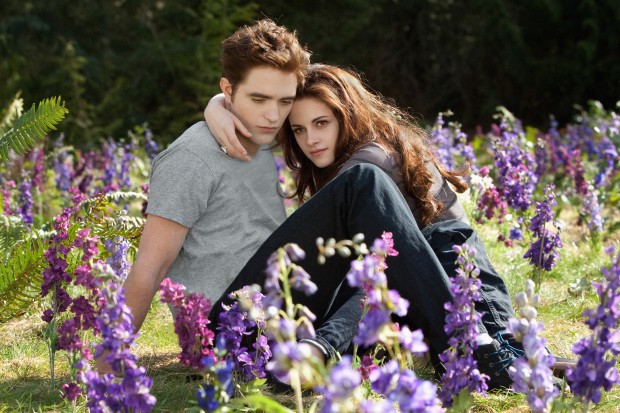 Robert Pattinson and Kristen Stewart star in a scene from the movie "The Twilight Saga: Breaking Dawn -Ð Part 2." The Catholic News Service classification is A-III -- adults. The Motion Picture Association of America rating is PG-13 -- parents strongly cautioned. Some material may be inappropriate for children under 13. (CNS photo/Summit)

NEW YORK (CNS) — Those tears glistening in the eyes of teenyboppers everywhere are a sure sign that a franchise beloved by their demographic is coming to an end.

Yes, folks “The Twilight Saga: Breaking Dawn — Part 2” (Summit), the fifth installment of the blockbuster series, is also its finale.

The wrap-up finds our domesticated vampire hero Edward Cullen (Robert Pattinson) and his once-mortal, but now undead bride Bella, nee Swan (Kristen Stewart), enjoying both married life and newfound parenthood. But domestic bliss does not a drama make, so the opening scenes are likely to prove dull for all but the most diehard adherents of Team Edward.

They also introduce the first of two elements that might give the parents of the targeted generation pause. Together with Bella’s transformation, marriage has removed the part-moral, part-metaphysical barrier that kept the plot’s central courtship chaste. So the bliss aforementioned is celebrated in scenes of intimacy as well as in dialogue concerning vein-drainers’ superhuman stamina for the same.

But there’s trouble brewing, so we don’t tarry too long in the bedroom.

In a case of mythic mistaken identity, fellow plasma-fancier Irina (Maggie Grace) spies Edward and Bella’s half-human, half-bloodsucker daughter, Renesmee (Mackenzie Foy), from a distance and takes her for a so-called “immortal child.” As some clunky exposition informs us, these pesky beings caused all sorts of trouble in the distant past, and they have accordingly been banned by the Volturi, the ruling clique of the vampire world.

As the Volturi, with their scheming leader Aro (Michael Sheen) at their head, rouse themselves to wreak vengeance on Edward, Bella and Renesmee, the happy trio’s allies gear up to defend them. Foremost among the latter are Bella’s disappointed beau Jacob Black (Taylor Lautner), whose ability to turn himself into a werewolf will now come in handy, and the parental figures who preside over Edward and Bella’s coven of vampires, Dr. Carlisle Cullen (Peter Facinelli) and his wife Esme (Elizabeth Reaser).

Themes of family loyalty, tolerance for others and the corrupting effects of power underlie the easy-to-laugh-at but undeniably entertaining proceedings that follow. And director Bill Condon’s gothic romance — adapted, like its immediate predecessor, from novelist Stephenie Meyer’s bestseller “Breaking Dawn” — boasts both a high-energy climactic battle and a twist ending.

But the unsettling means by which the undead dispose of each other during this conflict — essentially gore-free decapitation, followed by burning — may also raise a red flag with some oldsters. They will have to assess how well mature adolescents may cope with such sights.

The film contains some harsh but bloodless violence, fleeting gore, semi-graphic marital lovemaking with partial nudity and a couple of crass terms. The Catholic News Service classification is A-III — adults. The Motion Picture Association of America rating is PG-13 — parents strongly cautioned. Some material may be inappropriate for children under 13.

NEXT: Visually impressive ‘Life of Pi’ problematic with multi-religion adherence