Joseph Kennedy biography comprehensive, but may be too much for many 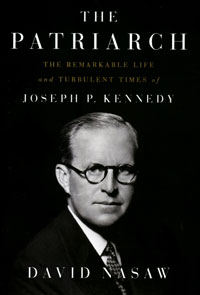 Before one even begins to read “The Patriarch,” David Nasaw’s comprehensive biography of Joseph P. Kennedy, there is a 10-page listing of the “Cast of Characters” in Kennedy’s life.

This section not only explains relations but it also reads as a “Who’s Who” of the first seven decades of the 20th century. It shows how a young man fromBostonbecame a multimillionaire and reared a family that would be dominant in American politics.

Nasaw has worked on other biographies, including William Randolph Hearst and Andrew Carnegie. He is the Arthur M. Schlesinger Jr. professor of history at theGraduateCenterof the City University of New York.

He writes that he had access to many documents never seen before. He conducted massive amounts of interviews and worked on the project for six years. It shows. This is a biography, but it also is a history of theUnited Statesthrough the lens of Kennedy’s life.

The book was written upon the request of the Kennedy family. However, Nasaw says no restrictions were put upon him. The author acknowledges that Kennedy “has been vilified and dismissed as an appeaser, an isolationist, an anti-Semite, a Nazi sympathizer, an unprincipled womanizer, a treacherous and vengeful scoundrel who made millions as a bootlegger and Wall Street swindler, then used those millions to steal elections for his sons.”

The book does show that there is some truth to those allegations — especially the womanizing. However, Nasaw writes that Kennedy’s life was more complicated and that few have spoken of his intelligence, business acumen, loyalty, love, hard work and fierce devotion to those he loved.

The book does not sanitize Kennedy, nor does it show him as a tyrant. Nasaw includes notes that Kennedy wrote to his sons to encourage them in their studies — including young Jack, who was not a scholar.

The lengthy biography also goes into detail on how Kennedy helped the country during the Great Depression and organized the Securities and Exchange Commission.

Kennedy had a relationship with Pope Pius XII that began in 1936 when the pope was Cardinal Eugenio Pacelli, the Vatican secretary of state. All of the Kennedys would travel toRomein March of 1939 when he became pope. In fact, Ted Kennedy would make his first Communion at the same time.

It is that kind of little detail that fills this book. It is filled with tales of family life and friendships. It also addresses difficulties and confrontations. It shows the contentious relationship between Kennedy and President Franklin Delano Roosevelt. And it also demonstrates the problems Joseph and his children had with the Catholic Church, especially in the area of politics.

Kennedy is portrayed as a man who wanted peace and did not want to see his sons go to war. He outlived four of his adult children and was responsible for choosing surgery that would unwittingly harm another.

The author conveys that Kennedy had privilege, power and money. However, he also shows that Kennedy was too quick to speak, sometimes harsh and motivated by power and prestige.

It is an interesting book. It is well-written. However, the appeal of an 800-page biography is probably strongest for researchers and true Kennedy fans.

Weber is a reporter and producer for Catholic Communications for the Diocese of Springfield, Mass.

PREVIOUS: 4 seniors in ‘Quartet’ can’t resist the stage, even in retirement

NEXT: Sociologist responds to atheistic views on how Americans see faith