Which ‘Side Effects’ you? R-Rated, or something less vulgar? 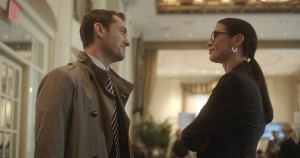 Jude Law and Catherine Zeta-Jones star in a scene from the movie “Side Effects.” The Catholic News Service classification is L — limited adult audience, films whose problematic content many adults would find troubling. The Motion Picture Association of America rating is R — restricted. Under 17 requires accompanying parent or adult guardian. (CNS photo/Open Road)

Yet a number of red-flag elements preclude not only youngsters but those in search of casual diversion as well.

This is the story of British-born, New York-based analyst Dr. Jonathan Banks (Jude Law) and one of his patients, Emily Taylor (Rooney Mara).

Emily suffers from depression and suicidal tendencies. But she also has more concrete troubles: Her formerly high-flying husband, Martin (Channing Tatum), has just finished serving a prison term for insider trading. With his arrest, their idyllic suburban lifestyle was left in ruins, and Emily has been struggling to make ends meet ever since.

As Martin works to re-establish himself, Dr. Banks experiments, all too casually, with various anti-depressants for Emily. One of them turns out to have side effects in the form of sleepwalking and unconscious behavior. But Emily prefers these consequences to the far more unpleasant symptoms — like sudden nausea — induced by other prescriptions she’s tried. So, at her behest, Dr. Banks keeps her on the drug.

Soon after, however, Emily commits a sensational crime under the hypnosislike influence of the medication. The ensuing firestorm of negative publicity threatens to destroy Dr. Banks’ career.

All is not what it seems, of course — as Dr. Banks discovers once he begins to dig into Emily’s past, including her relationship with her former shrink, Dr. Victoria Siebert (Catherine Zeta-Jones).

Scott Z. Burns’ script raises implicit questions about a society awash in pharmaceuticals that may be more beneficial to their manufacturers’ bottom line than to those taking them. But a handful of sexual encounters, some of them aberrant — as well as the gory offense at the heart of the plot — mean the rough-edged pieces of this jigsaw are for the sturdiest only.

The film contains brief but bloody violence, graphic marital lovemaking with fleeting nudity, semi-graphic lesbian sensuality, mature themes, including mental illness and suicide, at least one use of profanity as well as some rough and crude language. The Catholic News Service classification is L — limited adult audience, films whose problematic content many adults would find troubling. The Motion Picture Association of America rating is R — restricted. Under 17 requires accompanying parent or adult guardian.

PREVIOUS: Maker of Our Lady of Guadalupe docufilm hopes for wide circulation