Maker of Our Lady of Guadalupe docufilm hopes for wide circulation 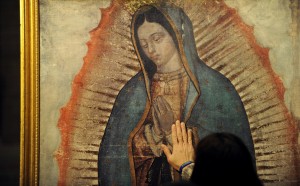 A woman lays her hand on a traveling missionary image of Our Lady of Guadalupe during a visit by the replica to St. Louis Church in Pittsford, N.Y., Oct. 28, 2012. The digital image is a reproduction of the image left on the tilma of St. Juan Diego in present-day Mexico City in 1531. (CNS photo/Mike Crupi, Catholic Courier)

WASHINGTON (CNS) — Before making his documentary on Our Lady of Guadalupe, “The Blood & the Rose,” director and co-writer Tim Watkins said, “I knew very little about Our Lady of Guadalupe.” Now, with his film out and available on DVD, he wants the world to know about her.

“I reinvigorated my faith about three years before I started making the film,” Watkins said before a Jan. 24 screening of the movie at a downtown Washington theater as a fundraiser for Catholic Charities of Washington.

“The Blood & the Rose,” narrated by actor Eduardo Verastegui of “Bella” and “For Greater Glory” fame, has two main parts.

One is the blood part. And while there are stylized representations, some of them in black-and-white, there is a lot of blood. That has to do with the human sacrifices by the Aztecs who inhabited parts of Mexico 500 years ago. That’s followed by violent battles between the Aztecs and the Spaniards, who ultimately conquered the Aztecs.

The other is the rose part. That would have to do with St. Juan Diego, who saw Our Lady of Guadalupe at the top of a hill. Eventually, to convince the bishop of what he witnessed, he brought out-of-season roses to the local bishop in the middle of December, wrapped in his tilma, a kind of outer cloak worn by indigenous people of that time, as the sign the bishop demanded. Left on the cloth was the image of a dark-skinned Mary.

Watkins’ documentary also gives a detailed demonstration of the image of Mary found on the tilma: how it has remained virtually unsoiled for nearly 500 years despite the accidental spilling of acid in one corner of the tilma; the image of Mary that appears on the tilma and how a scientific examination of some of its fibers determined that the materials found in the image cannot be found in the periodic table of elements; and how a separate examination of the tilma discovered the images of 13 distinct people in both Our Lady of Guadalupe’s eyes.

“The Blood & the Rose” also takes note of the devotion to Our Lady of Guadalupe in Mexico, even among non-Catholics. “We are not all Catholics,” comments one figure in the documentary, “but we are all Guadalupans.”

Watkins would like to see as big an audience as possible for the movie, starting with the estimated 70 percent of Catholics who don’t go to Mass regularly. He added he wants the film to be to be shown at large Catholic gatherings, like “the Rosary Bowl — 80,000 at Cowboys Stadium in Dallas. Can you imagine that on the big screens there?”

He said an audience of about 400 at the Franciscan University of Steubenville in Ohio saw a sneak preview of the movie “and they loved it.” An audience of roughly that size took in the movie in downtown Washington. Organizers said they had expected the March for Life to have come and gone from the nation’s capital by the time of the Jan. 24 screening, but instead the screening date turned out to be the night before the annual march.

“The Blood & the Rose” wasn’t the only movie with a religion theme getting a Jan. 24 preview. “Doonby,” the fictional tale of a drifter who is initially embraced by a small town but is later regarded with suspicion after he happens to be in the right place at the right time once too often to be mere coincidence, was shown in Washington under the sponsorship of New Evangelization Television, a ministry of the Diocese of Brooklyn, N.Y.

NEXT: Which ‘Side Effects’ you? R-Rated, or something less vulgar?