Twelve to watch as cardinals gather in Rome

VATICAN CITY (CNS) — Wherever journalists and bookmakers may be getting the names on their lists of top candidates for the next pope, it’s not from the cardinals who will actually vote in the election. Both custom and canon law forbid the cardinals to discuss the matter in such detail with outsiders.

Moreover, the true “papabili” — literally, pope-ables — are likely to emerge only after all the worlds’ cardinals — not just the 117 who will be under 80 and eligible to vote — begin meeting at the Vatican in the coming days.

One thing is already clear, however: because of their experience and the esteem they enjoy among their peers, certain cardinals are likely to serve as trusted advisers to the rest in the discussions and election.

Here, in alphabetical order, are 12 cardinals expected to have a major voice in the deliberations: 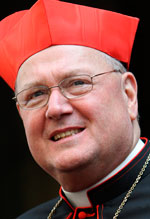 • Conventional wisdom has long held that the cardinals will never elect an American pope, lest the leadership of the church appear to be linked with the United States’ economic and geopolitical dominance. But the extroverted and jocular Cardinal Timothy M. Dolan, 63, charmed and impressed many in the College of Cardinals in February 2012 when he delivered the main presentation at a meeting Pope Benedict XVI had called to discuss the new evangelization. The pope himself praised the New York archbishop’s presentation on how to revive the faith in increasingly secular societies as “enthusiastic, joyful and profound.”

• Although not a familiar name in the press, Hungarian Cardinal Peter Erdo of Esztergom-Budapest, 60, is a major figure among his peers in Europe, the church’s traditional heartland and the region of more than half the cardinal electors. He was elected to a second five-year term as president of the Council of European Bishops’ Conferences in 2011.

• Canadian Cardinal Marc Ouellet, 68, is a member of the Society of St. Sulpice, whose members are, strictly speaking, diocesan priests but which is normally considered a religious order. Hence he is one of only 19 members of religious orders among the cardinal electors, who are overwhelmingly diocesan clergy. He is prefect of the Congregation for Bishops, which coordinates the nomination of bishops in Latin-rite dioceses around the world, so his work has brought him into frequent contact with most of his fellow cardinal-electors. As president of the Pontifical Commission for Latin America, he is well acquainted with one of the church’s largest and fastest-growing regions. The former archbishop of Quebec, who taught at the John Paul II Institute at Rome’s Pontifical Lateran University, is also a well-respected theologian.

• Italian Cardinal Gianfranco Ravasi, 70, president of the Pontifical Council for Culture, was the prelate chosen by Pope Benedict to lead his 2013 Lenten retreat, which will make him a prominent voice at the Vatican in the run-up to the election. The cardinal, a scholar with little direct pastoral experience, has been leading the universal church’s efforts to develop a nonconfrontational dialogue with nonbelievers, trying to make Christianity intelligible to the modern mind and build a reason-based consensus on key moral issues.

• Another religious, a Salesian, Honduran Cardinal Oscar Rodriguez Maradiaga of Tegucigalpa, 70, is president of Caritas Internationalis, the umbrella group of national Catholic charities around the world. As a result, many of his peers have come to know the multilingual cardinal as the person spearheading assistance to the neediest of their people. He aroused controversy in 2002 with remarks about clergy sex abuse that struck some as overly defensive of accused priests and the church’s past policies. But he was already widely mentioned as a possible pope before the 2005 conclave that elected Pope Benedict.

• Argentine Cardinal Leonardo Sandri, 69, was born to parents of Italian descent and has maintained strong ties with both Italy and Argentina. As prefect of the Congregation for Eastern Churches, he is familiar with the challenges facing Eastern Catholics and the pastoral concerns of the church in the Middle East. He has worked in the Vatican for more than a dozen years, and previously served as nuncio to Venezuela and then Mexico. His only experience in a parish was a brief assignment shortly after his ordination as a priest.

• Guinean Cardinal Robert Sarah, 67, is president of the Pontifical Council Cor Unum, which promotes Catholic charitable giving. He has used his leadership to emphasize Pope Benedict’s teaching that Catholic charitable activity must not be simple philanthropy, but an expression of faith, rooted in prayer and Catholic identity. A scripture scholar and former diocesan bishop, he served nine years as secretary of the Congregation for the Evangelization of Peoples.

• Another leading voice of the South American church is 63-year-old Brazilian Cardinal Odilo Scherer of Sao Paulo, Brazil’s largest diocese. The son of German immigrants, he also has strong ties to Rome. He studied philosophy and theology at Rome’s Pontifical Brazilian College and Pontifical Gregorian University and worked as an official of the Congregation for Bishops from 1994 to 2001.

• Austrian Cardinal Christoph Schonborn, 68, has known Pope Benedict for almost 40 years, having studied under him at the University of Regensburg, Germany. Even before his former professor became pope, the cardinal was well known at the Vatican and in wider church circles. He was invited in 1996 to preach Blessed John Paul II’s Lenten retreat and was the main editor of the Catechism of the Catholic Church, published in 1992. As the church in Austria has struggled with declining attendance and calls for change in some of its most basic disciplines, Cardinal Schonborn’s response has received increasing attention, with some praising his prudence and pastoral sensitivity, and others calling for more decisive action.

• Italian Cardinal Angelo Scola, 71, is the archbishop of Milan, the archdiocese led by both Popes Pius XI and Paul VI when they were elected. He previously served as patriarch of Venice, once the see of Blessed John XXIII. The cardinal, a respected academic theologian rather than a popular preacher, has longstanding ties to one of the new church movements, Communion and Liberation, which is based in his archdiocese.

• Philippine Cardinal Luis Tagle of Manila, 55, is one of the youngest and newest members of the College of Cardinals. Although he did not receive his red hat until November 2012, he had already made a name for himself at the world Synod of Bishops on the Word of God in 2008. This leader of one of the world’s fastest-growing churches is a popular speaker with a doctorate in systematic theology and has served on the International Theological Commission, an advisory body to the Congregation for the Doctrine of the Faith.

• Cardinal Peter Turkson is the 64-year-old former archbishop of Cape Coast, Ghana, and current president of the Pontifical Council for Justice and Peace. The cardinal, a biblical scholar who was active in ecumenical and interreligious dialogue, has frequently appeared on lists of possible popes. He aroused controversy in 2011 with a proposal for a “world central bank” to regulate the global financial industry, and then in October 2012 when he showed bishops at the Vatican a video warning about the growth of Muslim populations in Europe.