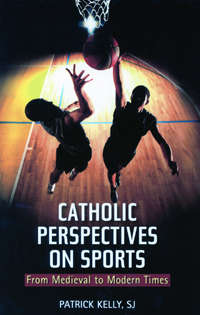 Jesuit Father Patrick Kelly introduces his book, “Catholic Perspectives on Sports,” by stating that “very little research has been done … on the relationship between Catholic theological and spiritual traditions and sport in the West.”

He finds this omission curious given Catholicism’s influence upon the world. What is needed, he states, is a “positive account of the relationship between Catholic theological and spiritual traditions” and sports. This book, it seems, is his effort to provide this positive account.

In addressing this topic, Father Kelly has amassed a great deal of research, which he shares throughout the 163 pages of text and 46 pages of endnotes. He also addresses the topic from a wide range of perspectives, including the attitudes of the Puritans toward play (negative) and the view of St. Thomas Aquinas (play has an important place in a balanced life). The quotes he presents are both enlightening and appropriate for the topic at hand.

While Father Kelly does a commendable job of bringing this research to our attention, he does little with the material. While he does present a “positive account” of some Catholic theological thought and practice on the role of play in a Christian life, the evidence is presented without argument. Information is brought to our attention but little is done with it to argue a point or reach a conclusion.

Reading about the various types of games played at Catholic schools and churches throughout the centuries is very informative. However, what Catholic attitudes about playing games were at this time cannot be fully determined.

Father Kelly mixes comments concerning play, games and sports at will as if there is no difference between them. This is problematic because they are not the same. Is there no difference between the spirited fun of children at spontaneous play, games that people play for group enjoyment, games of chance on which people wager, and the enormous role that organized sports plays in Western life today? Father Kelly does not address this distinction at all. Neither does he provide a definition for any of the terms.

Father Kelly’s thought is difficult to follow as he frequently connects seemingly random topics without explanation, expecting his readers to simply follow his logic. For example, in chapter 5, he begins by describing how Jesuit schools in 19th-century America advertised the importance of their play space and recreation facilities, then moves to the celebration of Mardi Gras in New Orleans, introduces Vince Lombardi and tells us that he was a good Catholic, and ends with several pages on the Immaculata College basketball team and its importance to the students and to the women religious who staffed the school. How any of this information fits with the purpose of the book is left for the reader to discern.

A detailed look at the role sports plays at Catholic high schools and colleges today would have been most welcome, as would some reflection on how Catholic theology, spirituality and anthropology might be used to shape the attitudes of the Catholic institutions and people who engage in these sports. Alas, such is wishful thinking.

Father Kelly provides us here with an interesting assortment of sources and citations. He succeeded in providing a number of Catholic perspectives on play, as the title of the book foretells. That he does not focus on sports or attempt to provide a theology or spirituality of sports is disappointing.

Mulhall is an avid, lifelong follower of sports. He lives in Laurel, Md.