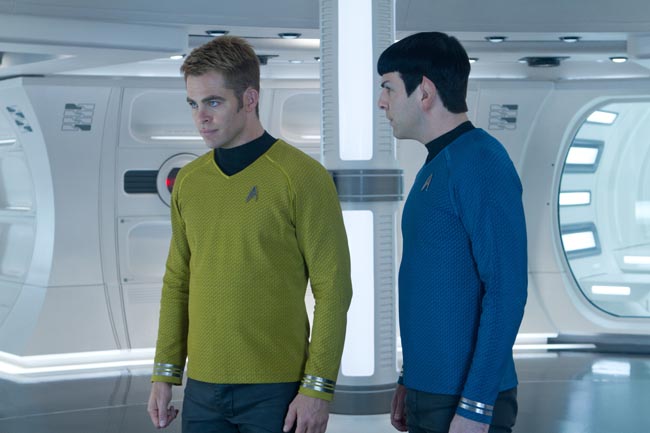 NEW YORK (CNS) — The original fans of the long-lived “Star Trek” franchise may be getting older; the TV series that started everything off, after all, first hit antennas (remember them?) nearly 50 years ago.

But director J.J. Abrams continues to keep the perennially appealing characters of this sci-fi stalwart young with his second chronicle of their early professional lives, “Star Trek Into Darkness” (Paramount).

In following up on his 2009 reboot of — and prequel to — Gene Roddenberry’s mythos, Abrams crafts a snappy adventure on a spectacular scale. And the story — penned by Alex Kurtzman, Roberto Orci and Damon Lindelof — carries an ethically respectable thematic cargo.

Still, the parents of teen Trekkies will need to weigh the profit of the film’s positive central message against the debit of some sensual imagery and vulgar talk.

You’d have to have been living in a dark cave on Kronos since at least the Johnson administration not to know that Capt. James T. Kirk (Chris Pine) is dynamic and impetuous. But just in case, early scenes confirm that he hasn’t changed his ways.

Neither has his seemingly emotionless half-Vulcan, half-human first officer Spock (Zachary Quinto). Spock’s devotion to pure logic endures, so too does his exactitude where regulations are concerned.

Marcus pushes Kirk’s buttons even as she steps on Spock’s toes (science being Spock’s traditional bailiwick). But neither she nor Harrison, it turns out, are quite who they initially appear to be.

To solve at least one of these mysteries, Kirk will have to resist both his own impulse to wreak revenge on Harrison — one of whose victims was someone close to Kirk’s heart — and the orders he’s been issued to eliminate the fugitive without trial.

As Kirk struggles to be true to his own better nature, with sage encouragement from Spock, the script issues a warning against employing immoral means to overcome evil — an admonition that registers as both scripturally resonant and timely. Other equally weighty subjects touched on include friendship and even death.

In connection with the latter topic, it cuts somewhat against the grain that McCoy manages to produce a deus ex machina-style plot reversal by means of a chemically engineered resurrection. Christian viewers may be willing to dismiss this as either trivial or desperate. But it doesn’t help matters that Spock, at another juncture, flatly denies the possibility of miracles.

Many youthful viewers may lack the angelic doctor’s far-seeing wisdom, and may also be edged out of the appropriate audience for “Star Trek Into Darkness” by the elements listed below. But at least some adult guardians may consider the picture acceptable for older adolescents.

“Star Trek Into Darkness” will be shown on both Imax and conventional screens.

The film contains much bloodless battling but also occasional harsh violence, some sexual content — including a trio glimpsed waking up together and scenes with skimpy costuming — a few uses of crude language and a half-dozen crass terms. The Catholic News Service classification is A-III — adults. The Motion Picture Association of America rating is PG-13 — parents strongly cautioned. Some material may be inappropriate for children under 13.

PREVIOUS: Excesses of ‘The Great Gatsby’ excusable? Not so, old sport