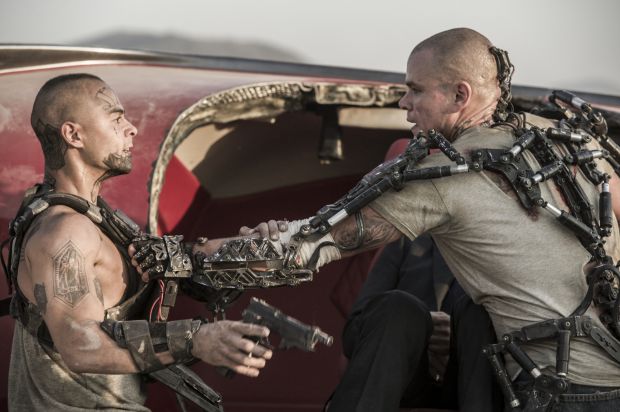 Jose Pablo Cantillo and Matt Damon star in a scene from the movie "Elysium." (CNS photo/Sony)

NEW YORK (CNS) — Back in 2009, South Africa-born writer-director Neill Blomkamp made quite a stir in Hollywood with his low-budget, high-box office science fiction film “District 9.”

Penned in collaboration with Terri Tatchell, the movie used its human characters’ interaction with an invading race of unpleasant-looking, insectlike extraterrestrials as a prism through which to examine topics like racism, colonialism, apartheid and xenophobia.

Similarly serious aims underlie Blomkamp’s latest project (this one scripted solo), the dystopian action picture “Elysium” (TriStar). In crafting what might be termed a thinking person’s shoot-’em-up, Blomkamp envisions a future society with numerous — and uncomfortable — analogous ties to our own.

Though obviously well-intentioned –viewers of faith will sympathize with the narrative’s point of view on a range of subjects — the resulting parable is also laden with harsh vocabulary and visuals. As such, it’s suitable only for stalwart grown-ups.

Considered aesthetically, moreover, caricature and oversimplification weaken the impact of the film’s implicit messages concerning such contemporary ills as the plight of immigrants, restricted access to health care and the unequal division of resources.

Familiar social and environmental blights have run rampant in the mid-22nd-century world of “Elysium.” So much so that the Los Angeles in which its protagonist, an industrial laborer named Max (Matt Damon), ekes out his existence is one vast ruined slum peopled by demoralized and oppressed drones.

Since similar conditions prevail across the despoiled globe, the rich have retreated to the idyllic satellite from which the movie takes its title. There they live a life of ease — and enjoy miraculous medical technology not shared with their underlings on the home planet.

After a workplace accident exposes him to a lethal dose of radiation, Max is desperate to reach this orbiting world of privilege where he knows he can be healed.

In exchange for passage there, he agrees to undertake a perilous spying mission for underground guerilla leader Spider (Wagner Moura). A master of high-tech innovation and a dabbler in all sorts of illegal activities, Spider has the necessary resources to smuggle Max aloft.

Since the secrets Max is out to steal have the potential to undermine the whole system protecting Elysium’s way of life, his assignment brings him into conflict with one of the habitat’s top leaders, ruthless Secretary of Defense Delacourt (Jodie Foster).

Up to her neck in high-stakes political intrigue, Delacourt also has personal reasons for wanting to stop Max. And she has just the man for the job: a brutal mercenary called Kruger (Sharlto Copley). As Delacourt’s long-standing secret agent on Earth, Kruger specializes in keeping the downtrodden in line — by any means necessary.

Flashbacks to childhood reveal that the orphaned Max was befriended and nurtured by a deeply sympathetic nun (Yolanda Abbud L.) — a figure whose portrayal Catholic moviegoers in particular will appreciate.

She serves as Max’s steady moral compass, though she’s not a guide on whom he always relies. But the lack of balance or shading among other representative characters means that “Elysium” succeeds more as a suspenseful adventure than as anything of deeper significance.

NEXT: Whatever Steve Jobs’ flaws, his biopic ‘Jobs’ crashes more than an iMac