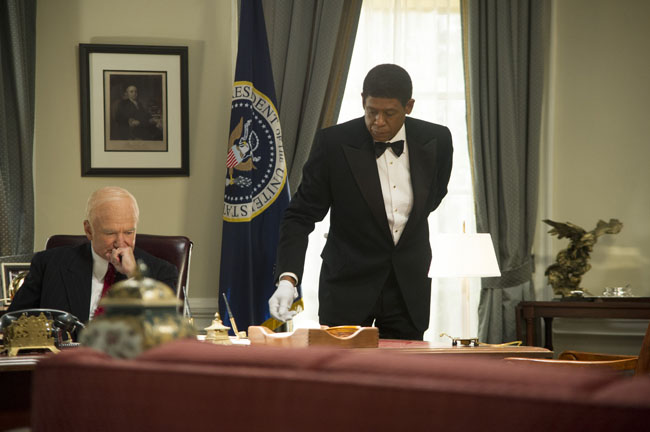 NEW YORK (CNS) — A frequently heard slogan of the late 1960s held that “the personal is political.” Whatever its value as a rallying cry, that phrase certainly fits the affecting fact-based drama “Lee Daniels’ The Butler” (Weinstein) in which the private and public realms collide.

Escaping the vicious racism of the early 20th-century Deep South — flashbacks to the Georgia cotton plantation where he was raised prove harrowing — Cecil makes his way to the relatively less oppressive surroundings of Washington. There he masters the art of providing elegant service to the all-white patrons of an elite hotel, a skill that requires him to suppress not only his true feelings, but his views on any controversial matter.

Cecil’s discretion wins him the favorable notice of a White House agent, and he secures a coveted place on the domestic staff of the executive mansion. As he proceeds to work, close at hand, with every president from Dwight D. Eisenhower (Robin Williams) to Ronald Reagan (Alan Rickman), Cecil cherishes the cautious hope that, under their leadership, white Americans will eventually see the light on racial issues.

Of the several appealing performances from which the movie benefits, Winfrey’s complex portrayal of Gloria is perhaps the most impressive. Earthy yet spiritual, a commanding matriarch yet a woman tempted both by the bottle and by a slick, seductive neighbor (Terrence Howard), Gloria follows an erratic course through life — one very much in contrast with her husband’s steady ways.

Still, it does come across as a bit too pat when Louis moves, with seeming inevitability, from training for sit-ins at lunch counters to enrolling as a Freedom Rider to enlisting in the Black Panther movement. All the more so, since his on-cue, Malcolm X-inspired radicalization is followed, in short order, by his younger brother Charlie’s (Elijah Kelley) departure for Vietnam.

Additionally, those of a Republican bent should note that the climactic first-term election of the current commander-in-chief is presented not only in an understandably celebratory light but in one that borders on adulation.

Vulgar language and other red-flag content would normally prevent recommendation of “Lee Daniels’ The Butler” for any audience but grown-ups. But the moral significance of this uplifting journey — undertaken within a context of implicit religious faith and strong marital commitment — is such that at least some parents may consider it acceptable for older teens.

The film contains occasional action violence, an adultery theme, numerous mature references, a half-dozen uses of profanity, a couple of rough terms and some crude and crass language. The Catholic News Service classification is A-III — adults. The Motion Picture Association of America rating is PG-13 — parents strongly cautioned. Some material may be inappropriate for children under 13.

PREVIOUS: Whatever Steve Jobs’ flaws, his biopic ‘Jobs’ crashes more than an iMac

NEXT: Woody Allen shines a bright light on the blue mood of ‘Blue Jasmine’