Whatever Steve Jobs’ flaws, his biopic ‘Jobs’ crashes more than an iMac 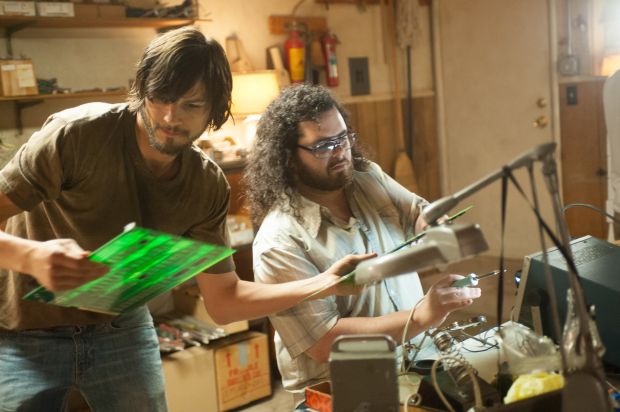 NEW YORK (CNS) — “Jobs” (Open Road) may not be the worst biographical film ever made. But it certainly earns an unenviable place in the pantheon of lame screen profiles.

Ashton Kutcher, directed by Joshua Michael Stern from a script by Matt Whiteley, portrays Steve Jobs (1955-2011), the founder of the Apple computer empire, as an amoral, monomaniacal tyrant who cheats all who come into contact with him. When he’s not abusing co-workers, he’s being roundly applauded, in the manner of a Broadway star, on his way to becoming a self-proclaimed technology guru.

The ugly truths about Jobs’ self-centered personality have been widely documented. So too has the boardroom battle that briefly ousted him from Apple, only to have him noisily return a few years later, evicting his opponents along the way. That’s all here, right down to his annoying habit of always parking in a handicapped spot at corporate headquarters.

No one should expect biographies of highly driven people to show them without flaws or moral compromises. “Jobs,” however, fails abysmally at fundamental storytelling.

How did this man get the way he was? It’s not here. There’s only the outward behavior, which veers wildly between narcissism and schizophrenia.

Especially troubling is the sequence in which Jobs kicks live-in girlfriend Chris-Ann Brennan (Ahna O’Reilly) out of his house simply because she’s pregnant and he doesn’t want to take any responsibility for the baby.

Some years later, we see the child in question, Lisa (Annika Bertea), sleeping on the couch at Jobs’ palatial home. How did she get there? We’re left to guess.

When not hectoring colleagues, like the strangely faithful Steve Wozniak (Josh Gad), or cheating his co-founders out of stock options as Apple is about to become a publicly traded corporation, Jobs speaks in aphorisms as inspirational music swells. “How does anybody know what they want if they’ve never even seen it?” he asks.

By the time he’s introducing the iPod, his cult of personality is in full force, and he’s emitting platitudes such as “When you can touch somebody’s heart, that’s limitless.”

Rival corporations such as IBM and Microsoft appear only in discussions. At one point, Jobs calls up Bill Gates at Microsoft and curses him for allegedly stealing software ideas.

Whatever these two men’s respective places in history may turn out to be, the stultifying “Jobs” sadly gives us no more insight into its chosen subject than it does into his unseen rival.

The film contains cohabitation, two scenes of drug use, a couple of instances of profanity and frequent crass language. The Catholic News Service classification is A-III — adults. The Motion Picture Association of America rating is PG-13 — parents strongly cautioned. Some material may be inappropriate for children under 13.

NEXT: ‘The Butler’ makes an inside-the-White-House journey personal