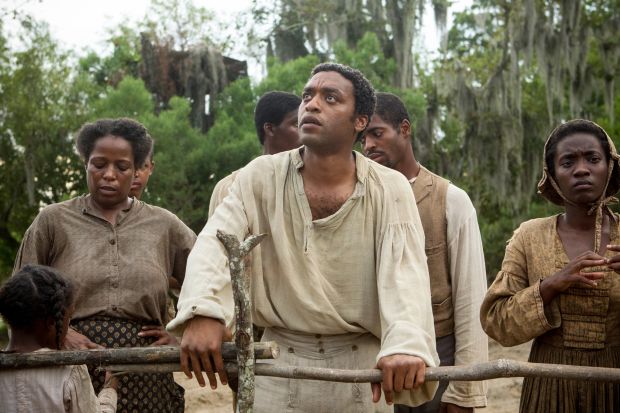 Chiwetel Ejiofor, center, stars in a scene from the movie "12 Years a Slave." (CNS photo/Fox Searchlight)

NEW YORK (CNS) — If you thought Alex Haley’s “Roots” was the definitive take on antebellum slavery in the United States, prepare for a harsh wake-up call with “12 Years a Slave” (Fox Searchlight).

Unlike Haley’s 1976 book, which became a landmark TV miniseries, this film focuses on man’s inhumanity to man, portraying it with brutal honesty and a degree of violence that is almost intolerable.

That alone would normally restrict the picture’s appropriate audience to a small group of adults. Yet at least some mature teenagers might benefit from this important history lesson with its searing depiction of the endurance of the human spirit against crushing odds.

Directed by Steve McQueen (“Shame”) from a screenplay by John Ridley (“Red Tails”), “12 Years a Slave” is based on the true story of Solomon Northup (Chiwetel Ejiofor), a free black man who published the eponymous memoir in 1853 and became a prominent abolitionist.

The beginning of the screen account finds Northup living happily with his wife and children in upstate New York where he earns his living as a carpenter and violin player. Befriended by two strangers, Northup is persuaded to travel to Washington to earn extra money as a musician.

There Northup’s nightmare begins. He awakens from a drunken evening in chains, sold by his new “friends” into slavery. Stripped of his identity and now called Platt, he is shipped to New Orleans, where he’s auctioned off to the highest bidder.

The viewer shares Platt’s sense of disbelief and horror as he endures every possible indignity, not to mention repeated beatings and whippings. As bleak as the outlook is, Platt stays focused on regaining his freedom and returning to his family — somehow.

“I don’t just want to survive,” he tells his fellow slaves. “I want to live!”

To do so, he must walk a fine line, not revealing his true identity or the fact that he is an educated man who can read and write, a threat to any slave owner.

Over a dozen years, Platt has two masters, one benevolent, one not. Kindhearted plantation owner William Ford (Benedict Cumberbatch) senses something unique about Platt and enlists his help as a musician and engineer.

Platt’s talents, however, are resented by Ford’s overseer John (Paul Dano), who abuses him. When Platt snaps and beats John to a pulp, Ford has no choice but to sell Platt to keep the peace.

His new owner is Edwin Epps (Michael Fassbender), a sadist who quotes scripture as justification for beating his slaves and raping the women among them. As the years pass, the future seems bleak for Platt, until he learns to trust in the unexpected kindness of a stranger (Brad Pitt).

The violence in “12 Years a Slave” is relentless and an assault on all the senses, its tone and feeling reminiscent of “The Passion of the Christ.” Both films employ brutality to make an important point. Here it serves as a reminder of the sufferings of African-Americans and the long, dark shadow cast by their bondage down to the present day.

PREVIOUS: A look at classic cinema’s depiction of personal holiness

NEXT: Author’s ‘what if’ offers fascinating view of JFK’s second term