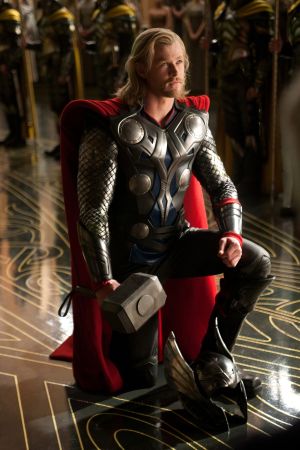 Chris Hemsworth stars in a scene from the movie “Thor.” (CNS photo/Paramount)

NEW YORK (CNS) — Wielding his mighty hammer, the “God of Thunder” returns with a vengeance in “Thor: The Dark World” (Disney), a rousing 3-D adventure based on the popular Marvel Comics series.

Director Alan Taylor, best known for helming the HBO drama “Game of Thrones,” is in familiar territory here, wrapping his actors in a complex mythology while staging grand battle sequences worthy of “The Lord of the Rings.”

Fortunately, it’s not all gloom and doom as the film’s title suggests. There’s a good deal of humor to lighten the mood, and some worthy messages about family, honor, and a Christian sense of self-sacrifice to vanquish evil and protect the innocent.

This sequel to 2011’s “Thor” and 2012’s “The Avengers” finds our titular superhero (Chris Hemsworth) back on Asgard, his home world. He’s returned his wayward brother Loki (Tom Hiddleston) to stand trial for nearly destroying Earth in the last movie.

Loki is sentenced to life in prison by his none-too-pleased parents, King Odin (Anthony Hopkins) and Queen Frigga (Rene Russo).

When he is not making peace at home or abroad (there are Nine Realms to manage), Thor pines, Tarzan-like, for Jane (Natalie Portman), the girl he left behind on Earth.

In the two years since their parting, Jane has been busy, using her knowledge of astrophysics to bridge the gap between the worlds and reunite with her hunky boyfriend. She’s a little too successful, getting herself sucked into a vortex to the Dark World of the film’s title, where she is infected with an ominous force called Aether.

If this all sounds confusing, it is, and it’s best to take the mythological and scientific mumbo-jumbo in stride. Suffice it to say that, as Odin intones, “Long before the birth of light there was darkness.” It was a time when the Dark Elves, led by Malekith (Christopher Eccleston), crushed the Nine Realms into submission, with Aether their weapon of mass destruction.

Jane’s fiddling awakens the Dark Elves from their eons-long slumber, and Malekith and his minions plot their re-conquest by extracting the Aether from its human host.

That is, not if Thor has anything to say about it. He plucks Jane from her London home base and whisks her to Asgard for safety. There she meets his parents and plants a few kisses on Thor before war begins.

With the destruction of his world imminent (isn’t that always the case with these comic book films?), Thor must turn to the only person with the key to victory: his disgraced brother.

Can he trust Loki? Will brothers bury the hatchet — make that hammer — before it is too late?

“Thor: The Dark World” assumes operatic proportions as it barrels toward a smash-bang conclusion that lays waste to multiple worlds, not to mention some lovely Georgian architecture in London. Parents should note that the violence, though cartoonish and bloodless, is extreme at times and not for little ones.

The film contains intense but bloodless combat scenes, some scary sequences, and a few mild oaths. The Catholic News Service classification is A-III — adults. The Motion Picture Association of America rating is PG-13 — parents strongly cautioned. Some material may be inappropriate for children under 13.

PREVIOUS: New Christmas/Advent movie arrives in time for the holidays

NEXT: In ‘Best Man Holiday,’ religion takes a back pew to raucous shenanigans