‘Noah’ bobs along until crashing on the rocks of family drama 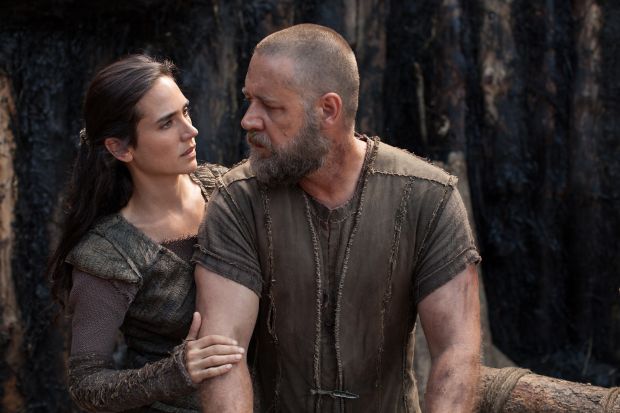 Jennifer Connelly and Russell Crowe star in a scene from the movie "Noah." (CNS photo/Paramount)

NEW YORK (CNS) — “Noah” (Paramount), which begins as a fairly straightforward recounting of the biblical story of the flood, eventually veers off into a grim, scripturally unfounded drama about a family dispute.

This clan conflict is driven by the titular patriarch’s (Russell Crowe) misguided interpretation of God’s purposes in causing the deluge. Though Noah’s extreme pro-nature, anti-human reading of the situation is corrected in the end, his temporary fanaticism requires that viewers approach the film with mature discernment and with a solid grounding in the relevant, sometimes mysterious passages of the Old Testament.

Even early on, the narrative of the Book of Genesis is padded out, and there are some borrowings from other parts of the Bible as well as from noncanonical works. Thus, in convincingly portraying the wickedness from which the earth is to be cleansed, director and co-writer Darren Aronofsky embodies the range of sinful tendencies on display in the impious person of self-proclaimed “King” Tubal-Cain (Ray Winstone).

The single verse of Scripture that refers to Tubal-Cain — Chapter 4, Verse 22, of Genesis — tells us only about his genealogy and his role as, more or less, the first metalworker. But there is a tradition that at least part of Tubal-Cain’s craft involved forging weapons, so perhaps he can reasonably be enlisted as the prototype of arms merchants and war-profiteers.

A more questionable exercise of creative liberty presents us with a race of giant creatures called the Watchers. Their background story, meant to connect them to the shadowy Nephilim mentioned in Chapter 6 of Genesis, describes them as angels who voluntarily fell to Earth to help the fledgling human race. The idea of angel-like Watchers also evokes the Book of Daniel and the extra-canonical books of Enoch and Jubilees.

Still, the opening sequences are largely faithful to the original story, though in place of a direct revelation by God, Noah is tipped off to the fate of humanity by a dream. He interprets this vision — acknowledging that it was sent by “the Creator,” as God is always called in the dialogue — with the help of his grandfather, Methuselah (Anthony Hopkins).

The building of the ark and the gathering of the animals are also according to Hoyle, and are accomplished through predictably impressive special effects.

On the eve of the flood, though, the stage is set for the familial clash that will occupy the audience’s attention throughout the ark’s forthcoming voyage. This necessitates not just a departure from the text of Genesis, but a direct contradiction of it.

The Bible tells us that all three of Noah’s sons — Shem (Douglas Booth), Ham (Logan Lerman) and Japheth (Leo McHugh Carroll) — were accompanied onto the ark by their wives (Chapter 7, Verse 13, of Genesis). On screen, Shem has his destined bride in Ila (Emma Watson), an orphan Noah and his wife, Naameh (Jennifer Connelly), long ago rescued and adopted. But Ham has no spouse, and Noah systematically thwarts his efforts to acquire one, while Japheth is barely a teenager.

Noah, it emerges, believes that the only reason he and his relatives have been rescued by God is so that they can keep the animals safe during the flood. Having seen to all the other creatures’ survival, it will then be wicked humanity’s destiny to die out, restoring the natural world to a pure and innocent state.

This ultra-environmentalist outlook not only puts Noah at odds with Ham but — through a late-blooming crisis not to be outlined for fear of a spoiler — with everyone else on board except Japheth. Since Noah will stop at nothing to carry out the apparently anti-life mission the Deity has entrusted to him, what we are left with, for the time being at least, is not a model of faith but an image of unbalanced zealotry.

All this is somewhat mitigated, and explained away, before the closing credits. And Aronofsky’s script, penned in collaboration with Ari Handel, approaches its weighty themes of righteousness and evil, punishment and redemption, with due seriousness.

But, taken together with the elements listed below, the movie’s dramatic deviations from its inspired source material mean that young viewers would be better directed — initially at least — to more literal-minded adaptations, rather than this very free variation on a theme.

The film contains much stylized violence with minimal gore, an off-screen encounter that may be premarital, distant partial nudity and some mild sensuality. The Catholic News Service classification is A-III — adults. The Motion Picture Association of America rating is PG-13 — parents strongly cautioned. Some material may be inappropriate for children under 13.

PREVIOUS: If you like to eat, you’ll devour these books