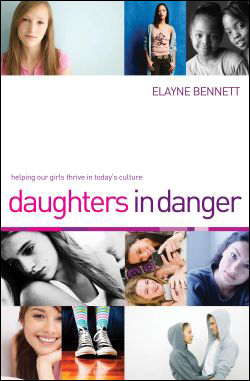 To some readers “Daughters in Danger: Helping Our Girls Thrive in Today’s Culture” will bring awareness about the perils young women face and instruct families and institutions how to help girls survive in an overly sexualized and violent world.

But others may be put off by the book’s many judgmental comments based on assumptions and opinions.

The author, Elayne Bennett, undoubtedly will hit naive parents with a reality check about the threats young woman face. A mother of two sons, Bennett is the founder and president of Best Friends Foundation, which partners with schools to promote “self-control through self-respect,” as well as abstinence from premarital sex, illegal drugs and alcohol. Bennett has been working in this capacity with young women for decades. She is the wife of William Bennett, an author and political commentator who worked in the administrations of former Presidents Ronald Reagan and George H.W. Bush.

Bennett writes as an advocate and not a social scientist, and her commentary is embedded throughout.

She informs readers that young women will face such challenges as teen pregnancy, sexually transmitted diseases and sexual violence.

She argues that parents should be keenly and actively aware of what their daughters are exposed to in school, such as questionable sex-education programs and the current college campus culture that contributes to the over-sexualization and objectification of women. If awareness is the first step to helping girls survive the frightening culture she so accurately describes, then the book has value.

Bennett makes many recommendations, insisting that first and foremost a solid family with a present and engaged mother and father is key to a daughter’s success. Readers will recognize her suggestions about what schools can do from common Catholic education practices, such as adopting a kindergarten through eighth-grade model to help girls transition emotionally to high school, to uniforms and same-sex classrooms.

Bennett’s ideas and opinions are pulled from research-based books, literature and modern media, such as YouTube, online articles and television.

This is not a book based solely or heavily on primary research or firsthand interviews, as Bennett does not directly quote the people she includes in her examples. The general conclusions, arguments and first-voice commentary are sprinkled within sometimes disconnected titles and subtitles.

For example, in the chapter about what schools can do to help young women, Bennett summarizes the story of Natalee Holloway, who disappeared during a loosely chaperoned and unofficial class trip to Aruba. Instead of focusing on what the school did or did not do, as the title of this section would suggest, Bennett argues that the media neglected to scrutinize Natalee’s parents, who allowed her to go on such a trip.

She writes, “In the TV movie version, Natalee’s divorced father, Dave Holloway, restates his objections to having let her go. … The fact that he was no longer living under the same roof as Natalee obviously weakened his authority.” Bennett tries to connect the parents’ divorce to the circumstances of the trip, but she uses a TV movie to make that connection. Regardless of its misplacement in this chapter, her conclusion seems unfair and judgmental, given its source.

Elsewhere, in a particularly broad statement regarding the challenges boys face, Bennett suggests that young men are exposed to emasculating literature. To make this point, she references the example of only one reading list from one public library in Maryland.

Later, Bennett uses the example of Florida teens Rachel Wade and Sarah Ludemann to illustrate what fathers should do to help their daughters. The young women fought viciously over their boyfriend, and it ended in a fatal stabbing.

Bennett concludes, “Although these girls’ fathers surely loved their daughters, to rescue them they would have had to wade right into the culture and pull their daughters out, kicking and screaming if necessary. They did not know enough to do this.”

Unfortunately the reader really does not know what the fathers did or did not do. The only information that can be gleaned from the book is from footnotes. Only then is the reader given a little more information about the fathers in the online article referenced. Bennett should have talked to the fathers. Or, as in the case of several of her pulled-from-the-headlines examples, she should have left it out of the book entirely.

In a society in which young women are exposed to and even inundated with near-pornographic images on TV (thanks, Miley Cyrus and Beyonce), some of Bennett’s points are a good addition to the conversation. But because of the holes in her argument, she has made herself vulnerable to harsh criticism.

PREVIOUS: How to train your child’s ecological viewpoint

NEXT: ‘Thinking’ without a moral compass