How to train your child’s ecological viewpoint 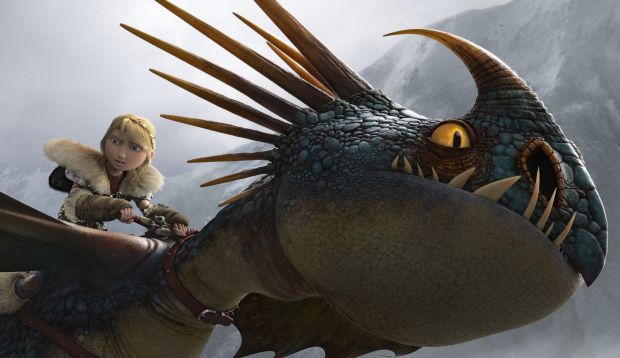 Astrid rides her faithful dragon in a scene from the movie "How to Train Your Dragon 2." (CNS photo/DreamWorks Animation)

NEW YORK (CNS) — Making excellent use of 3-D technology, the 2010 animated adventure “How to Train Your Dragon” earned two Oscar nominations and a large payoff at the box office.

Although it may seem like an eternity to eager young fans, four years is not an overly long time to wait for a sequel given the painstaking nature of the animation process, even when fully computerized.

The team behind “How to Train Your Dragon 2” (Fox) — which is adapted, like its predecessor, from a series of children’s books by Cressida Cowell — used the interval to create more outstanding visuals. Time spent on the script is less in evidence.

The follow-up is pleasing to the eye, mildly amusing and occasionally poignant. But saddled with promoting an ecologically correct agenda, the dialogue often sounds clumsy.

To recap the original film, after rescuing a wounded dragon whom he dubbed Toothless, Viking teen Hiccup (voice of Jay Baruchel) proved to his fellow residents on the Island of Berk that dragons are not to be feared. Now his community lives in harmony with their former adversaries.

Thus at the outset of the sequel, riders are seen racing the happily domesticated creatures in a game that involves sheep and resembles Quidditch from the “Harry Potter” films.

Twenty-year-old Hiccup does not participate — to the dismay of his father Stoick the Vast (voice of Gerard Butler) who is anxious for his son to succeed him as Berk’s chief. Instead, Hiccup and Toothless are out exploring the world.

Joined by Astrid (voiced by America Ferrera), they encounter a dragon trapper named Eret, Son of Eret (voice of Kit Harington) who is helping the malevolent Drago Bludvist (voice of Djimon Hounsou) assemble a dragon army.

The movie kicks into gear during a thrilling sequence in which Hiccup, soaring high above the clouds astride Toothless, sees a masked figure atop its own magnificent mount. This mysterious individual, who turns out to be someone very close to Hiccup, takes him to a secret sanctuary where an array of colorful dragons, many injured or endangered, are protected by a gigantic, ice-breathing alpha dragon.

In due course, Hiccup and his peers must defend both the sanctuary and Berk against the dragons controlled by Drago.

Overseen by writer-director Dean DeBlois, who co-directed and co-wrote “How to Train Your Dragon” and “Lilo & Stitch,” the animation of the various dragon species is worth the price of admission. The wobbly screenplay, which insists, none too subtly, that respect for all creatures is a moral imperative, needs shoring up.

Cate Blanchett, Kristen Wiig and Jonah Hill are among the actors asked to deliver lines such as: “We will change the world for all dragons and make it a safer place.” “Dragons are kind, amazing creatures that can bring people together.” And, finally, “You have the heart of a chief and the soul of a dragon.”

As these quotes suggest, the movie comes close to elevating dragons above mankind. We are warmongering brutes, whereas they are innately gentle creatures, incapable of evil.

There’s justification for such a view, including the assumption that dragons, like actual animals, do not possess reason or genuine free will and are not tainted by original sin. And it’s no surprise the movie has an ecological message when it seems as if every family-oriented Hollywood movie must do so in order to get made. Still, the theme is taken so far and is expressed in such bald terms that viewers may find it unsettling.

Conversely, when Hiccup is anointed chief at the end, a medicine woman marks his forehead with a dark, cruciform sign that Catholics can interpret as both a nod to Ash Wednesday and as an instructive reminder of the pagan origins of many more ancillary Christian rituals.

While a “How to Train Your Dragon” trilogy is planned, no doubt there will be a wait-and-see period before the third installment gets the final go-ahead. Without compromising their commitment to first-rate animation, the filmmakers would be wise to spend that time honing their script.

Small children may be spooked by some of the imagery, but the episodes in which the dragons behave ferociously are relatively short-lived.

The film contains several scenes with mildly scary fantasy action, one instance of potty language and a single demeaning epithet. The Catholic News Service classification is A-I — general patronage. The Motion Picture Association of America rating is PG — parental guidance suggested. Some material may not be suitable for children.