‘Thinking’ without a moral compass 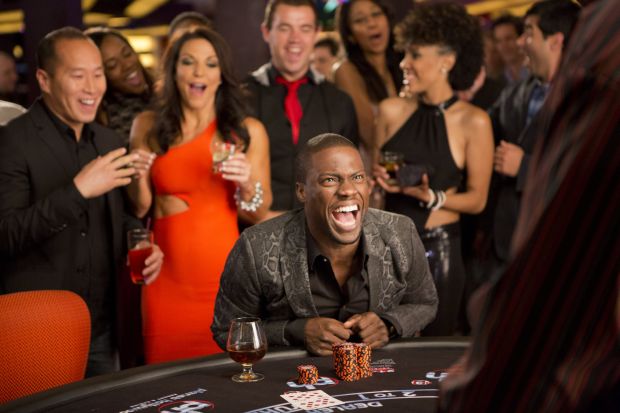 Kevin Hart stars in a scene from the movie "Think Like a Man Too." (CNS photo/Screen Gems)

NEW YORK (CNS) — A popular saying holds that “What happens in Vegas stays in Vegas.” That may be true, but plenty of Sin City’s debauchery is shared on screen in “Think Like a Man Too” (Screen Gems). This vulgar follow-up to the 2012 film is based, like its forerunner, on a best-selling book of relationship advice by comic Steve Harvey.

Tim Story occupies the director’s chair again, and Keith Merryman and David A. Newman return as screenwriters, taking their cues from Harvey’s “Act Like a Lady, Think Like a Man.” Together, they offer a predictable, PG-13 version of “The Hangover” and “Bridesmaids” as they chronicle the misbehavior of friends and family gathered for a wedding.

Regrettably, as in the original movie, the moral compass is skewed for viewers of faith. Premarital sex and cohabitation are taken for granted, regardless of whether the couples involved eventually meet at the altar — the desired outcome. On the way, sinning with your friends is just fine, so long as you clean up the mess afterward.

As a modern-day Sodom, Vegas, it seems, provides the perfect backdrop for the union of Candace (Regina Hall) and Michael (Terrence J). Their bliss, however, is jeopardized by Michael’s interfering mother Loretta (Jenifer Lewis,) who is dead set against the match.

Loretta presents herself as a moral woman and her son as “a good Christian boy,” the film’s only reference to religion (if you discount the profanity).

Behind the scenes, the other duos also have issues. Kristen (Gabrielle Union) keeps her husband Jeremy (Jerry Ferrara) on a tight schedule, as she is desperate to have a baby. Lauren (Taraji P. Henson) and Dominic (Michael Ealy) are still unmarried and preoccupied with their respective careers, as are Maya (Meagan Good) and Zeke (Romany Malco).

Zeke’s randy past in the Mecca of vice catches up with him, as does his moniker, “Zeke the Freak.”

The court jester is Cedric (Kevin Hart), who is divorcing Gail (Wendy Williams). Cedric is determined to be “the BEST best man.” That means taking the fellows on a pre-nuptials night of binge drinking and strip clubs.

“We’re here to make bad decisions and regret them the next day,” Cedric announces.

The ladies, not to be outdone, go off on their own adventure — one which involves similarly wayward behavior.

Despite some laugh-out-loud moments, “Think Like a Man Too” suffers from an identity crisis. On the one hand, it condones various strains of immorality, so long as the misdeeds in question are committed is in the spirit of fraternity and with the aim of having a good time. On the other, it tries to impart sound relationship guidance based on the idea that true happiness means marriage and fidelity.

The film contains benignly treated premarital relationships and drug use, fleeting partial nudity, some profanity as well as pervasive crude language and sexual banter. The Catholic News Service classification is O — morally offensive. The Motion Picture Association of America rating is PG-13 — parents strongly cautioned. Some material may be inappropriate for children under 13.