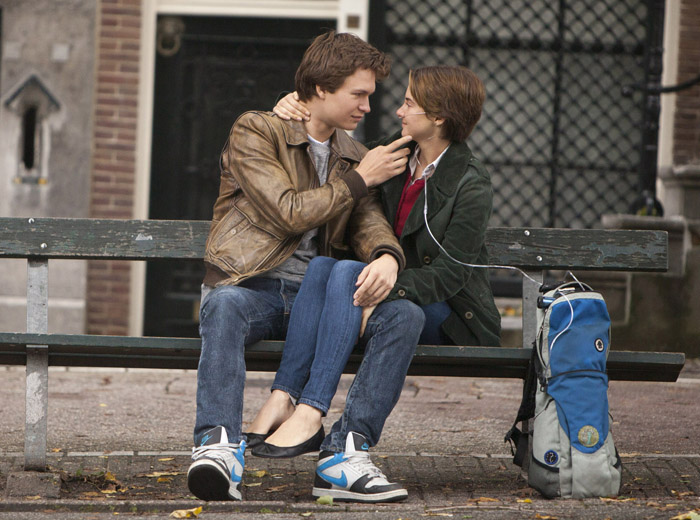 Ansel Elgort (left) and Shailene Woodley star in a scene from the movie "The Fault in Our Stars." The Catholic News Service classification is A-III -- adults. The Motion Picture Association of America rating is PG-13 -- parents strongly cautioned. Some material may be inappropriate for children under 13. (CNS photo/Fox)

NEW YORK (CNS) — Only the cynical would refer to the cancer-themed teen drama “The Fault in Our Stars” (Fox) as a five-hankie romance.

But even that wouldn’t be a bad thing in itself. Good cries are cathartic. And true love in the face of untimely death never fails to inspire.

Though sexuality and language put this screen version of John Green’s 2012 novel on the adult side of the ledger, it may be acceptable for the most mature adolescents.

Director Josh Boone’s lush adaptation — scripted by Scott Neustadter and Michael H. Weber — keeps all the beloved aphorisms found in its source material. Yet its overall effect is more clouded and ambiguous.

Still, in Shailene Woodley’s performance of heroine Hazel Grace Lancaster, we’re presented with one of the most appealingly literate and sensible teen girls to appear on the screen in some time.

Hazel and Augustus “Gus” Waters (Ansel Elgort) meet at a cancer support group in Indianapolis. She has thyroid cancer that’s spread to her lungs, making her dependent on a portable oxygen tank. He’s in remission from bone cancer, to which he’s lost a leg.

The group — which meets at an Episcopal church — is led, somewhat ineffectually, by Patrick (Mike Birbiglia). He’s divorced, sings Christian folk songs and, for some unexplained reason, brings along a large “Heart of Jesus” rug he wove himself.

This dubious artifact doesn’t seem to faze the teens, though, and Hazel and Augustus quickly bond over her favorite novel, “An Imperial Affliction,” the fictionalized story of a cancer patient named Anna.

This being a romance, Gus tracks down the book’s author, Amsterdam resident Peter Van Houten (Willem Dafoe), so Hazel can write to him and inquire about Anna’s literary fate.

Gus also arranges for a charitable foundation to fly Hazel, her mother, Frannie (Laura Dern), and himself to the Dutch capital to meet Van Houten. The author turns out to be an abusive drunk who refuses to answer Hazel’s questions.

At one point, he hisses, “You are a failed experiment in mutation!”

From then on, the film is a rumination on the harsh reality of dying. Religious faith gets only oblique mentions. Gus believes in an afterlife; Hazel is unsure.

Their first kiss, shared in — of all places — the attic of the Anne Frank House would seem, on the face of it, like the worst possible example of inappropriate behavior. But here, the two have learned what real misery is. The verbal abuse of a bitter author sinks into insignificance by comparison.

As portrayed by Elgort, Gus comes off as an amiable narcissist. “I intend to live an extraordinary life. To be remembered,” he tells Hazel. She replies, “Oblivion’s inevitable. If that scares you, I suggest you ignore it. Because that’s what everyone else does.”

This plot line reaches its apogee in the “pre-funeral” Gus stages in which Hazel and friend Isaac (Nat Wolff) read eulogies they’ve composed. The scene also serves as the audience’s dividing line.

Those who love the novel will gush appreciatively. Others may be tempted to bellow, “Life-threatening illness or not, get over yourself!”

The film contains implied premarital sexual activity and fleeting crude and crass language. The Catholic News Service classification is A-III — adults. The Motion Picture Association of America rating is PG-13 — parents strongly cautioned. Some material may be inappropriate for children under 13.

NEXT: For the aging and the ages, stories provide valuable insight