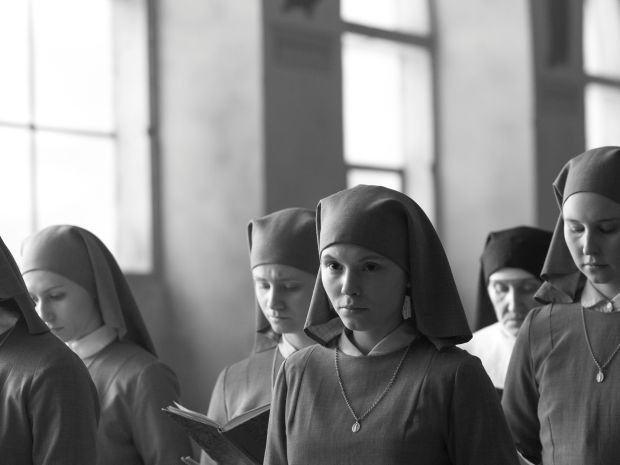 While brisk and unadorned at a brief 80 minutes, the film is nevertheless anything but simplistic. Director and co-writer (with Rebecca Lenkiewicz) Pawel Pawlikowski assumes that the audience knows something of the Holocaust in Poland, and of the Stalinist show trials to consolidate state power that followed the Soviet victory in World War II.

The story, set in a dismally cold 1962, has Anna (Agata Trzebuchowska), an 18-year-old novice, about to take her vows. Her mother superior (Halina Skoczynska) summons Anna and tells her that she must first visit her Aunt Wanda (Agata Kulesza), her only living relative. Mother does not indicate what Anna can expect to learn from the encounter.

The life of the convent is the only existence Anna has ever known, since she was left there as an infant.

Anna’s real name, Wanda explains, is Ida Lebenstein, and her parents were killed in a forest by people who were supposedly hiding them from the German invaders.

Brought up to be obedient, Anna/Ida takes all this in with a surprisingly calm air. She asks Wanda to help her find out more about what happened to her parents and their farm. Armed with her natural tenacity and — as a communist insider — with the rare luxury of a car, Wanda agrees.

What ensues is a road trip marked by Wanda’s constant boozing, the pettiness of local authorities, and the dim atmosphere of a hotel jazz club where Ida eventually breaks out of her shell via a furtive romance with saxophonist Lis (Dawid Ogrodnik?).

Complicating the search, her parents’ farm is now owned by a family of Catholics who at first retort to Ida’s inquiries, “No Jews ever lived here.” At the same time, though, they ask Ida to bless their infant child.

Similar contradictions characterize the interaction between atheist Wanda and her believing niece. “What if you go there (i.e., her parents’ former home) and discover there is no God?” she asks Ida early on. Later, returning from a night of dissolute partying to find Ida absorbed in prayer, Wanda snorts, “This Jesus of yours died for people like me!”

Wanda can’t see what the church offers Ida, but the script doesn’t necessarily support her view. Rather, it depicts Ida as a girl getting a late start on life, and her mother superior comes off as very wise for insisting that she see her aunt.

The tragic reality that Catholics participated in the slaughter of Jews is not concealed. But it’s also shown that Stalinist Jews killed innocents as well.

A particularly touching scene has Wanda arranging, as a family tree, old photographs of relatives, presumably all victims of the Holocaust. Among the photos is one of Irena Sendler, the real-life Catholic nurse responsible for smuggling 2,500 Jewish children out of Poland.

In keeping with the complexities of the history with which he deals, Pawlikowski leaves his beautifully photographed film deliberately open-ended.

The film contains implied nonmarital sexual activity, a suicide and fleeting crass language. The Catholic News Service classification is A-III — adults. The Motion Picture Association of America rating is PG-13 — parents strongly cautioned. Some material may be inappropriate for children under 13.

NEXT: Cancer-themed teen drama delves into love, death and tears