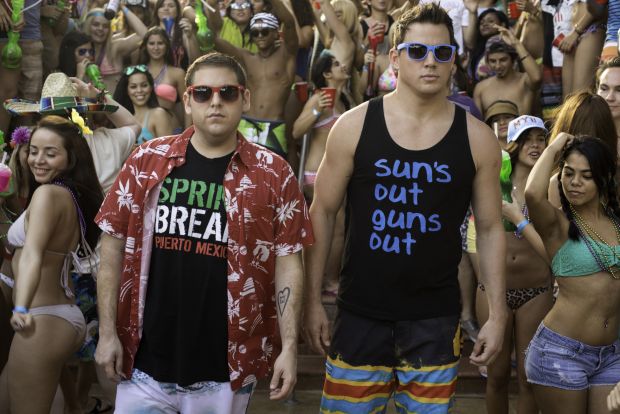 NEW YORK (CNS) — Chaotic, foul-mouthed and ultimately loathsome, “22 Jump Street” (Columbia) tries to have it both ways with the subject of homosexuality, alternately snickering at it and defending it.

Male bonding between schlubby undercover cop Schmidt (Jonah Hill) and his partner, dimwitted muscular Jenko (Channing Tatum), is shown with a romantic subtext. But when a skinhead bad guy discovers the two of them in the library stacks and uses a hateful term, Jenko suddenly becomes hugely self-aware and shouts out a lecture on hate speech.

This sequel to 2012’s “21 Jump Street” — like its predecessor, a spoof of the Fox series first broadcast in 1987 — has a couple of expertly staged action sequences strung together by obscenities.

In this installment, Schmidt and Jenko graduate from posing as high school students to infiltrating the fictional Metropolitan City State College where they pretend to be brothers. Their target is a drug dealer who has introduced “Why Phy” to the campus. This imaginary, cocainelike substance gives young people an instant boost in concentration and energy, but ultimately leads to paranoia and death.

A tiresome parade of crotch-level gags ensues as the two pledge a fraternity; Jenko becomes a star on the football team — and takes gay sexual punning to a new level with quarterback Zook (Wyatt Russell) — Schmidt romances Maya (Amber Stevens), who turns out to be the daughter of their perpetually angry commander, Capt. Dickson (Ice Cube); and various students insult them while seeing through their charade.

As in the first movie, the covert program operates in an abandoned church once used by Korean-Americans, only this time, Dickson refers to a large statue of Christ he previously dubbed “Korean Jesus” as “Vietnamese Jesus.” This ugly combination of religious flippancy and mild racism fortunately doesn’t go any further.

NEXT: How to train your child’s ecological viewpoint