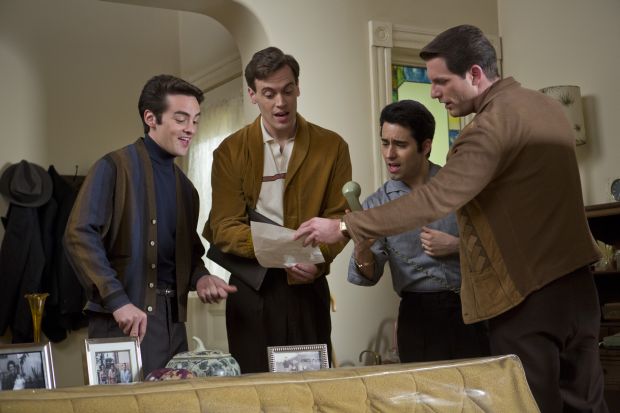 NEW YORK (CNS) — Success on the stage does not easily translate into success on screen, particularly for a musical. And yet if the tunes are enjoyable, all is not lost. That’s the case with “Jersey Boys” (Warner Bros.), a movie version of the long-running Broadway show about The Four Seasons, a 1960s vocal group.

Faced with an adaptation that often feels lackluster and slapdash, one wonders if the filmmakers’ creative license was severely encumbered. But since the director is Clint Eastwood, who has considerable clout in Hollywood, that seems unlikely.

It’s more probable that Eastwood and his key collaborators — including screenwriters Marshall Brickman and Rick Elice, who also wrote the musical — chose not to fiddle with material that continues to please theatergoers.

Choices still had to be made, however, and two important ones impact the movie negatively. First, “Jersey Boys” was filmed entirely in Los Angeles — primarily on the Warner Brothers back lot. As a result, it lacks visual authenticity.

Failing to convey the look and atmosphere of 1950s-1970s New Jersey is especially problematic when the story is so rooted in time and place. Every nightclub interior, residence and diner looks the same. The costumes also appear recycled. Undistinguished lighting and cinematography accentuate the film’s generic quality.

Second, having the actors peer into the camera and talk to the audience doesn’t work. Direct address is a device more commonly used in the theater. Here it interrupts the flow and detracts from the fly-on-the-wall intimacy movies can afford. Voice-overs, while not ideal, are a better option.

Tommy DeVito (Vincent Piazza) is the first character to address viewers when, at the outset, he introduces us to his vocally gifted pal Frankie Valli (John Lloyd Young). It’s 1951 in Belleville, N.J., just outside of Newark.

Frankie works in a barbershop and Tommy is a go-fer for mob boss Gyp DeCarlo (Christopher Walken). He’s always hustling something — Frankie’s talent most of all — and, while dabbling in crime, the two play in a series of bands along with bassist Nick Massi (Michael Lomenda).

After songwriter and keyboardist Bob Gaudio (Erich Bergen) joins them, the group starts to gain traction, but it’s a long struggle. Eventually they break through with “Sherry,” which is followed by two more chart-topping hits: “Big Girls Don’t Cry” and “Walk Like a Man.”

During the second half of the film, personal and professional trials centering on Frankie’s family and Tommy’s mismanagement are more pronounced than the triumphs. Without greater psychological insight and detail, it’s difficult to become emotionally invested in this quintessential showbiz story. The lack of memorable acting is also an impediment.

Music is the bright spot. Valli’s falsetto tenor is distinctive, to say the least. Young won a Tony and plenty of other hardware for replicating it in the original Broadway cast. He may lack movie star charisma but he has the vocal chops; his soulful rendition of the 1975 smash “Who Loves You” is a high point.

The toe-tapping song arrangements are true to the period and accentuate the sentimental charms of the group’s sound. The movie soundtrack may not inspire millions of downloads, but their music is already fixed in the pop culture canon.

Because of some tonal dissonance — many scenes in the first half are so lighthearted and tongue-in-cheek they approach parody — and the far-from-uplifting final reel, “Jersey Boys” doesn’t come off as a fawning homage. The theme that loyalty is the paramount virtue in Jersey neighborhoods, however, fails to strike a resonant chord when marital fidelity appears to be the sole exception.

Although Eastwood is a true jazz aficionado and no stranger to making movies about musicians (see 1988’s “Bird” about jazz saxophonist Charlie Parker), there’s scant evidence he brought his own musical sensibility to “Jersey Boys.” Maybe it would be a better movie if he had riffed on the material. At the very least, he should have tried harder to tailor it to the screen.

Most of the humor derives from stereotypes and cliches, none of which is sharp enough to offend Italian-Americans and/or Garden State residents. The brief appearance of a Catholic nun who swigs wine and burps is gratuitous. Yet it’s the amount of bad language that ultimately disqualifies “Jersey Boys” as suitable for minors.

PREVIOUS: ‘Thinking’ without a moral compass

NEXT: ‘Mario Kart 8’ puts a supercharge into Nintendo’s Wii