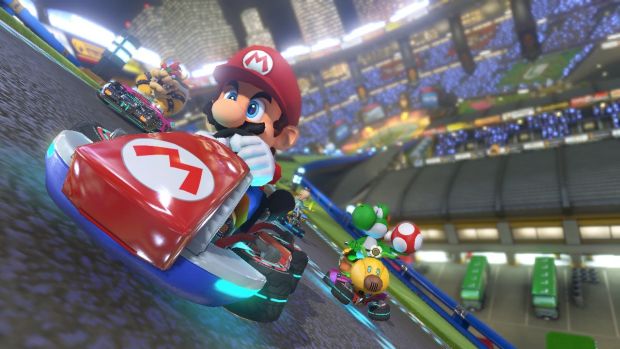 This is an image from the video game "Mario Kart 8." (CNS/Nintendo)

The company received some rough press in 2012, when it produced the Wii U, a new gaming system. Critics charged that the market was saturated with X-Boxes, PS4s, Vitas and other, supposedly superior, devices. Why was Nintendo needlessly adding to the pile?

The naysayers may now have their answer. Nintendo has just released a new game for the Wii U, “Mario Kart 8.” Sales have been spectacular, and with good reason: “Mario Kart 8” pleases in every way. A racing game, it boasts joyful, nonviolent action, kid-friendly characters and graphics that break new ground.

The Wii U gaming system is unique. It can be played simultaneously on TV and on the handheld GamePad, which also has a screen. This makes it possible to switch over and watch TV while Wii U games run on the GamePad. That’s good news for parents anxious to reclaim their TV from their kids.

The Wii U components are beautifully designed and setup is easy. And, with additional controllers, up to four players can compete at once.

As avid gamers won’t need to be told, “Mario Kart 8” stars Mario, the mustachioed plumber who, as one observer noted, must be the most underemployed serviceman in America: He has time to globetrot, play golf and tennis, thwart Donkey Kong and pretty much do anything else, other than fix leaky pipes. In “Mario Kart 8” he’s a racecar driver.

The game offers 32 tracks from which to choose, under three different formats: Grand Prix, Time Trial and Race. Grand Prix and Time Trial are primarily for a single player trying to improve his or her time, while the Race function features 12 competitors. Karts zoom over courses like Water Park, Mario Circuit and Electrodome with the goal, of course, of being the first to reach the checkered flag after three laps.

There are hidden shortcuts, and hazards like oil slicks and lightning. It helps to pick up gold coins for speed. Other aids, like bananas and boomerangs, playfully sabotage rival drivers.

The visuals of the different tracks in “Mario Kart 8” are stunning; the experience is like entering a dream world. Courses run underwater and through the air (thanks to a hang glider that pops out from the kart). “Anti-gravity zones” even allow for upside-down racing. Around every turn gorgeous vistas open up: waterfalls and castles, snowy mountains, bridges that curve like roller-coasters.

Naturally, part of the challenge involves avoiding other vehicles. But even when a crash occurs the kart just gets a jolt accompanied by a funny sound effect. Players can also go online through the Wii U system and compete with other gamers from around the world.

“Mario Kart 8” is a thoroughly enjoyable title from a company that’s been prematurely counted out of the gaming industry more than once.

NEXT: ‘Transformers: Age of Extinction’ brings action, if you can endure it all