‘Transformers: Age of Extinction’ brings action, if you can endure it all 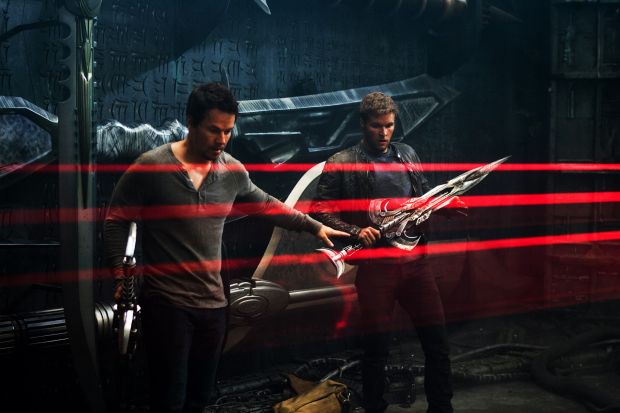 NEW YORK (CNS) — There may, no doubt, be circumstances that would justify a film having a running time close to three hours.

Some lavish adaptation of a Dickens novel, perhaps, or a sweeping historical epic might be expected to sustain prolonged viewer interest. A set of outsize Hasbro toys come to life, on the other hand, not so much.

Still, that’s what audiences will find waiting for them in the interminable 3-D action sequel “Transformers: Age of Extinction” (Paramount).

Such self-indulgence on the part of director Michael Bay is all the more regrettable because his fourth installment in this popular popcorn franchise is initially somewhat more engaging than its predecessors. The bond uniting small-time inventor, young widower and overprotective dad Cade Yeager (Mark Wahlberg) with his teen daughter, Tessa (Nicola Peltz), for example, gives us slightly more substantial human interest than was previously evident.

The rural setting of the Texas farm on which Cade and Tessa — routinely joined by Cade’s surfer sidekick, Lucas (T.J. Miller) — live out a cash-strapped but mutually caring existence, moreover, makes for some pleasant visuals. Less welcome is the wayward relationship between Tessa and her clandestine boyfriend, Shane (Jack Reynor). As both Cade and the audience eventually discover, Pop has had better cause to worry than he knew.

Once the alien robots from whom the series takes its title show up, however, it does turn out to be a good thing that Irish-born Shane makes his living as a racecar driver. These mechanical beings are capable of changing shape at will, and do so most often by shifting into the guise of speedy vehicles. So it helps the humans who get mixed up with them — as Cade does by buying a long disused truck — to have some velocity of their own.

For those not fluently familiar with Transformers lore in all its manifestations, the briefest of explanations: the good, i.e. human-friendly, guys are called Autobots and are led by Optimus Prime (voice of Peter Cullen). Their adversaries — and ours — are known as Decepticons. The whole point of plunking down your dozen or so dollars at the box office is to watch these guys magically morph — and noisily duke it out.

Stacked up against the endless shape-shifting and cacophonous combat, neither Wahlberg’s strong presence nor an amusing turn by Stanley Tucci as Joshua Joyce, a Steve Jobs-like tech pioneer stands much of a chance. Also lost along the way are scattered religious references — do Transformers have souls? — and a more sustained theme about the dangers of overreacting to terrorism.

That tendency is embodied by Harold Attinger (Kelsey Grammer), a top-ranking CIA agent for whom the only good automaton is a dead one.

Besides sometimes ridiculous dialogue, Ehren Kruger’s script also includes a heavy dose of vulgarity. Together with the benignly treated behavior between Tessa and Shane mentioned above, such verbal lapses make this sci-fi slog an inappropriate one for those youthful viewers who might best be able to endure it.

As for their elders, the legal phrase “time served” may spring to mind well before the final credits roll.

The film contains relentless, though largely bloodless, violence, an implied premarital situation, at least one use each of profanity and rough language and numerous crude and crass terms. The Catholic News Service classification is A-III — adults. The Motion Picture Association of America rating is PG-13 — parents strongly cautioned. Some material may be inappropriate for children under 13.

NEXT: Two books lead readers on two roads to Jesus