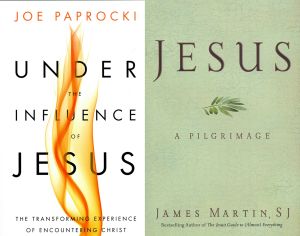 Jesuit Father James Martin, a noted author and media commentator, in “Jesus: A Pilgrimage” takes the reader on a remarkable journey of discovering what he calls “his” Jesus, concluding with an invitation that we undertake a similar pilgrimage to find our own Jesus.

The book is organized around a trip he took with a fellow Jesuit to the Holy Land, visiting the holy sites where Jesus lived, preached, died and rose in roughly the order of the events presented in the Gospels. At each stop he narrates his personal reaction to being in the places where Jesus was, and comments on the scriptural depictions of those events along with the meditations and thoughts of major Catholic theologians and spiritual thinkers.

Father Martin is well versed in contemporary biblical scholarship, Jewish as well as Catholic, and makes excellent use of the best of them. He interweaves scholarship into a popular-level narrative which will at once introduce many readers to their work and at the same time challenge readers to understand the Gospel narratives in new ways which, meditated upon, can deepen our faith as it enlarges our vision and deepens our understanding.

One fascinating aspect that emerges throughout Father Martin’s book is his encounter with Jesus’ humanity, as he walks in his steps, sees the stones, hills, valleys and farmlands that provided the setting for so many of Jesus’ sayings and parables, which we can understand anew through a sense of being in Jesus’ presence as he pointed to these mundane realities while challenging his Jewish hearers to a new understanding of their faith in the Father, the Abba of the Jewish people and of all humanity.

At the same time Father Martin grapples in a variety of ways with how this humble yet assertive Jew, fully human, could also be fully divine, a son of the people of Israel and, in a radically different way, of the God of Israel. Again, the weaving together of the best of biblical scholarship and doctrinal reflections from across the centuries renders the book a pilgrimage both temporal, set within a distinct time and place, and eternal, a spiritual meditation following Ignatian spirituality.

Father Martin does well pointing out both major themes of the Gospels and the historical setting of many of its details.

He notes that students of the rabbis, for example, were advised to tend to the physical needs of their masters, washing their hands, as prescribed before meals for all Jews, but also washing their feet. When Jesus washes the feet of his followers, he is reversing the role of master-teacher, or rabbi, and student, showing the respect that each of us must have for all of our fellow humans, not just those with high positions.

Father Martin also is careful, throughout, to make clear that the large majority of the Jews who knew of Jesus were positive about him, with only a small minority involved in the plot against his life. Jesus died at the hands of the Romans, a human killed by sinners for the sins of all humans.

Author Joe Paprocki looks at Jesus from another angle in “Under the Influence of Jesus.” This book is a spiritual meditation on what it means to be a Christian in one’s daily life. Written on a popular level, it makes use of the Scriptures and some of the best of Catholic thinking over the centuries.

It weaves together spiritual insights with the moral teachings of Jesus and the church. Following through on this guidance, the author argues, will make one more Christlike. Doing good for those in need brings one more deeply into oneself, giving rise to a deeper personal happiness as well as the betterment of others and of society as a whole.

Paprocki begins with the image from the Acts of the Apostles on Pentecost as the apostles came out speaking the good news of Jesus’ resurrection and appearing intoxicated. They are in fact intoxicated with the new possibilities of what he calls, aptly, an alternate reality, the kingdom of God on earth, in which they can share through the grace of Christ.

Paprocki lists — and the book contains numerous helpful lists — what the kingdom of God is not and what it is, a state of being marked by personal serenity in the face of life’s inevitable crises, of maintaining internal balance, accepting the foibles of others and keeping their, not one’s own, best interests in mind, even and especially when they fail us.

The author contrasts the trust of many people of Jesus’ time in Barabbas, who led a violent revolution against Roman oppression, with the message of Jesus, of nonviolence, of returning love for those who would oppress us. Paprocki does note that this message, to eschew Barabbas and to embrace Christ’s passion for peace and justice, is of the essence of the death of Jesus, freely accepted by him, and of his resurrection, God’s sign that the life of love that can overcome the worst of human evils.

Paprocki uses well the stories of Jackie Robinson and the Rev. Martin Luther King Jr., who met physical force with what Rev. King called “soul force” to confront American racism and move the heart of a nation whose soul has and remains scarred with its history of racism and slavery. I would add Dorothy Day, who lived a life of service to the poor and opposition to the American tendency to use military force.

The book is a wonderful retelling of the Gospel, God’s word, which works both as spiritual meditation and motivation for living a life of love, for oneself and others. Highly recommended.

PREVIOUS: ‘Transformers: Age of Extinction’ brings action, if you can endure it all

NEXT: ‘Tammy’ takes a road trip and learns nothing