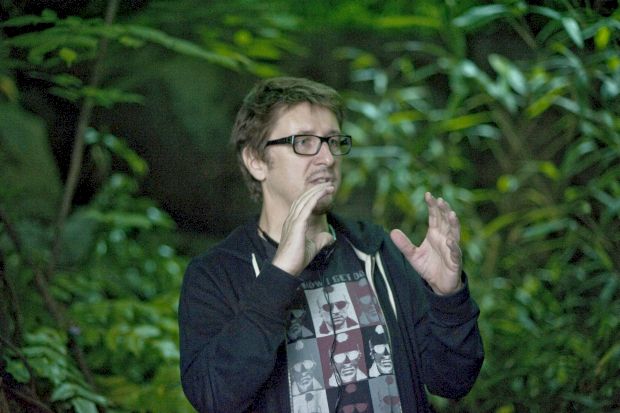 Director Scott Derrickson is seen on the set of the new movie "Deliver Us From Evil." (CNS photo/Sony Pictures)

WASHINGTON (CNS) — Clergy are too often stereotyped in movies “because writers and directors don’t know any pastors or priests,” said director Scott Derrickson, who helmed the new crime-horror film “Deliver Us From Evil.”

“I’ve known quite a few in my life. They’re some of the most interesting people I’ve met and some of the smartest people,” he said in a June 26 telephone interview from Hollywood with Catholic News Service.

(See a related story: ‘Deliver Us From Evil’ dances gingerly with the devil)

“Deliver Us From Evil” is taken from the memoir of New York police detective Ralph Sarchie, played by Australian actor Eric Bana, perhaps best known for the title role in 2003’s “Hulk” and who was featured in the 2009 “Star Trek” reboot.

According to the film’s production notes, Sarchie turns to an unconventional priest (Edgar Ramirez) for help when it becomes clear the evil he is fighting in one case is more spiritual than earthly. As he discovers the power of God is the only force that can defeat the enemy he is up against, Sarchie must decide whether he can put his faith in something greater than himself.

When you see the word “unconventional,” think “exorcist.” It’s the second time Derrickson has plumbed that territory for his films, his first being 2005, “The Exorcism of Emily Rose.” He said he can see how some would perceive “Emily Rose” serving as a precursor of sorts to “Deliver Us From Evil,” although nearly a decade spans the two.

“These scenes that are at work in ‘Deliver Us From Evil’ are not from a faith-versus-reason movie. There’s certainly some skepticism versus belief in it. But a lot of the movie is about personal demons, metaphorically,” Derrickson said.

“I think there’s some interesting ideas about vengeance in the (new) movie. There’s a lot about the will to confront evil in the world, and the people who do that. I think of the nobility of that ambition. I think there’s a lot of different, sprawling themes in ‘Deliver Us From Evil’ and that’s what I like about that.

“It’s not intended to be a date movie, to go to on a Friday or Saturday night and have a blast,” Derrickson continued. “I’ve gone to a lot of audience screenings, and it’s the highest-testing movie I’ve made.”

“Deliver Us From Evil” actually precedes “Emily Rose” in one regard, he told CNS. “I wrote a draft of this movie for (Hollywood producer) Jerry Bruckheimer in 2003,” he said. During this assignment, Derrickson was given a photocopied copy of a book on the real-life “Emily Rose” exorcism.

“That turned me on to this case. I optioned the book for the movie. The two books are interwoven in my mind. At the time of ‘Emily Rose,’ nobody had made a successful exorcism movie in 25 years, not since ‘The Exorcist.’ And then there were lots of them, a lot of demoniacs and possession films,” he added, including the “Paranormal Activity” franchise.

Derrickson, a Presbyterian, said he doesn’t sense that people are turned off to the notion of Christians working in the horror genre. “I felt a wariness from people that I don’t really feel anymore . … Anybody under 30 certainly doesn’t find it bizarre that the Christian works directly not in horror but in R-rated graphic horror. It’s a long-standing tradition that great artists of faith are working in gothic storytelling. It’s something that Dante did. Jesus told some scary stories.”

He added, “I’m interested in people and stories that break open for people the mysteries of life. I don’t think I would make scary movies that are just to be scary. There’s always something else going on — a more noble thing going on.”

John Mulderig, CNS assistant director for media reviews, said in a July 1 review that “Deliver Us From Evil” is “not just out to evoke chills. It’s also, in the strictest sense, a conversion story as well as an exploration of the reality of superhuman malevolence. In the face of such iniquity, the movie suggests, only an active and trusting faith will suffice.”

Nine years ago, when promoting “Emily Rose,” Derrickson said he was “one (G.K.) Chesterton book away from becoming Catholic.” Asked how many Chesterton books he’s read since 2005, he replied, “At least four or five since then, and if you count some of his shorter volumes, then even more.”

The father of children ages 11 and 8, he said, “If I didn’t have children, I think I would become Catholic. I would have crossed the Tiber (the river that flows through Rome). The older I get, the more Catholic writers I read,” naming Flannery O’Connor as his personal literary touchstone. And “I wear a St. Francis rosary now.”

“The reason I do not become a Catholic is that I have no idea how to raise my kids Catholic,” Derrickson added. “Raising them as Presbyterians is probably a lot less interesting, but biting off a conversion to Catholicism is something I’ve got to put off for a few more years.

“There’s nothing certainly theologically keeping me from doing it. I still hold some political positions that might be at odds with Catholicism, but that’s something I’d have to learn about to see how that works.”

PREVIOUS: Alienated kids find friend from another world in ‘Earth to Echo’

NEXT: ‘Deliver Us From Evil’ dances gingerly with the devil