Alienated kids find friend from another world in ‘Earth to Echo’ 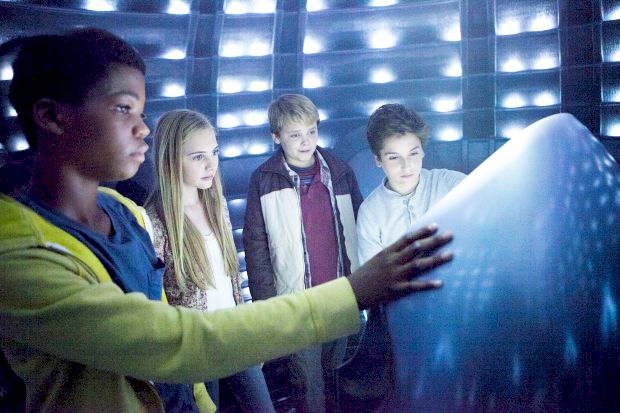 NEW YORK (CNS) — Originality is not the main selling point of the youthful sci-fi adventure “Earth to Echo” (Relativity). In fact, its plot is a mash-up of familiar story elements.

Yet director Dave Green’s gentle film, which employs a found-footage approach to its narrative and conveys positive lessons about loyalty and trust, is not without its rewards. These are more reliably found, however, in its humorous moments than in its attempts to be touching.

Aimed at tweens, the movie’s script includes some jokes and vocabulary that may not please all parents. But they’re likely no worse than the kind of exchanges heard on a daily basis in the halls of your local middle school.

That’s where you might run across the real-life counterparts of the picture’s trio of main characters: vulnerable foster kid Alex (Teo Halm), extrovert Tuck (Brian “Astro” Bradley) and tech nerd Munch (Reese Hartwig). Bound by their shared status as social outcasts, the three find solace in their mutual friendship.

But, as opening scenes explain, their bond is under threat. They’re about to be separated by the demolition of their suburban Nevada neighborhood, through which a highway is to be built.

Still, some mysterious cell phone activity they and others in the doomed community have recently been experiencing does offer the opportunity for one last exploit together. Since the source of the disruption seems to be located in the desert, the boys plan an overnight trip there to investigate. Their cover story involves spending the night playing video games at one another’s houses.

Reaching the wilderness, the nervous lads are stunned and thrilled to encounter the real cause of the ongoing communications glitch: a small stranded alien they dub Echo. Echo’s endearing, petlike personality quickly wins the pals over, and they commit themselves to helping him return home.

They’re eventually joined on this quest by Emma (Ella Wahlestedt), one of their most popular classmates and the seemingly unattainable lass for whom Alex carries a secret torch.

Yes, it’s “E.T.” meets “Stand by Me” with “Goonies” thrown in for good measure. But “Earth to Echo” is mildly diverting, with its wry observations on contemporary mores and a convincing subplot about Alex’s experience-based fear of desertion. While not appropriate for the youngest moviegoers, it may manage to charm its target audience without alienating, so to speak, their elders.

The film contains some teen sexual talk and a few crass terms. The Catholic News Service classification is A-II — adults and adolescents. The Motion Picture Association of America rating is PG — parental guidance suggested. Some material may not be suitable for children.

PREVIOUS: ‘Tammy’ takes a road trip and learns nothing

NEXT: Director likes stories that ‘break open mysteries of life’ for people