‘Deliver Us From Evil’ dances gingerly with the devil 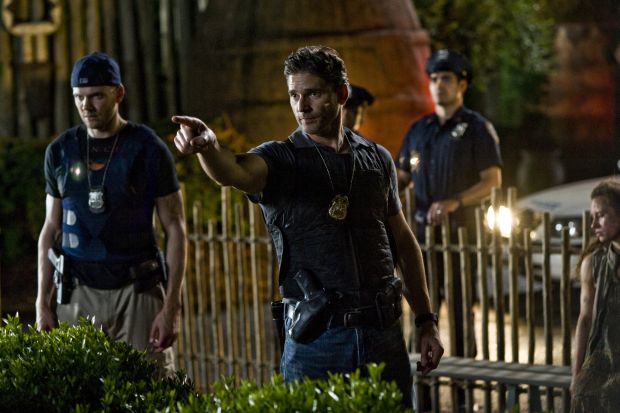 Eric Bana and Joel McHale star in a scene from the movie "Deliver Us From Evil. (CNS photo/Andrew Schwartz, Sony Pictures)

NEW YORK (CNS) — As exorcism movies go, “Deliver Us From Evil” (Screen Gems) is better than most.

Though sensational at times, director and co-writer Scott Derrickson’s screen version of Ralph Sarchie’s memoir “Beware the Night” (written with Lisa Collier Cool) does at least treat faith seriously. That’s hardly a surprise, however, given the sober tenor of Derrickson’s earlier take on the subject, 2005’s “The Exorcism of Emily Rose.”

Even so, its dark subject matter and some intense — and bloody — interludes suggest a cautious approach toward Derrickson’s latest dance with the devil on the part of all but the most resilient screen patrons.

The film’s credibility and effectiveness derive in large part from the profile of its main character. A no-nonsense New York City police officer and lapsed Catholic, Sgt. Sarchie (Eric Bana) is the last person to attribute the depraved behavior he encounters every day to supernatural causes.

So it’s all the more remarkable when Sarchie’s investigation of a series of peculiar crimes taking place on his beat in the South Bronx eventually leads him to suspect that more than ordinary evil is at work in them. He’s helped to that conclusion by Father Joe Mendoza (Edgar Ramirez), a priest whose ties to the church are frayed but whose spiritual outlook is orthodox enough.

Father Mendoza’s freelancer status and checkered past, the latter described at some length in the dialogue, may not sit well with some Catholic moviegoers. Yet as Derrickson’s script, written with Paul Harris Boardman, suggests, who better to battle Satan than someone with demons of his own that he’s managed to vanquish?

Whatever his earlier shortcomings, Father Mendoza certainly takes his priesthood seriously. He insists, for instance, that to be properly armed for his forthcoming struggle with the forces of darkness, Sarchie must humble himself before God, preferably by going to confession.

That Sarchie, for all his initial scoffing, does so indicates that “Deliver Us From Evil” is not just out to evoke chills. It’s also, in the strictest sense, a conversion story as well as an exploration of the reality of superhuman malevolence. In the face of such iniquity, the movie suggests, only an active and trusting faith will suffice.

NEXT: Cooperation and conflict arise in ‘Planet of the Apes’ sequel