‘Tammy’ takes a road trip and learns nothing 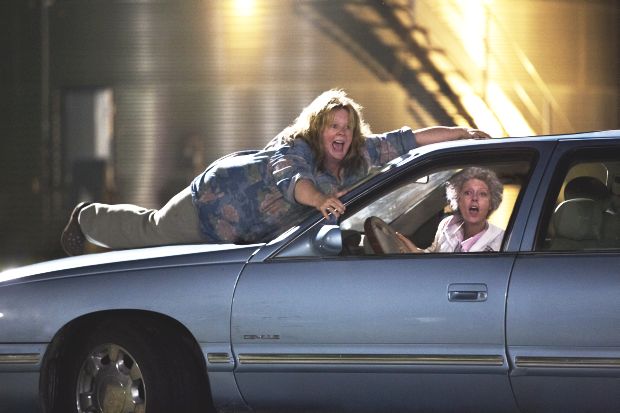 It doesn’t quite come off, since the childlike title character, played by Melissa McCarthy, starts out as blithely stupid, with earthbound self-esteem, and ends up just the same. Not only does she fail to become any more self-aware as the story proceeds, she also lurches through an escalating series of bad choices, including robbery and destruction of property.

Pearl, the grandmother played by Susan Sarandon, is no dispenser of elderly wisdom. She’s an alcoholic, diabetic oxycontin addict interested only in her own carnal adventures. The journey through a dreary Midwest that Tammy undertakes in hopes of bringing clarity to her existence becomes only a burden, unrelieved by a nonsensical romance that appears to have been tossed in at the last minute.

McCarthy, who co-wrote the script with director Ben Falcone, evidently had a sympathetic character in mind. As the story begins, Tammy is fired from her fast-food job and finds that her husband Greg (Nat Faxon) has been having an affair with her co-worker, Missi (Toni Collette).

Sucker-punched by life, Tammy escapes to her mother’s house, conveniently located in the same block, and announces her plan to hit the road to set her life in order. Mother Deb (Allison Janney) isn’t interested, but Pearl takes the bait right away and offers her Cadillac and $6,700 in cash for a journey to Niagara Falls.

Tammy and Pearl never get there, instead spinning through Kentucky and Missouri. Pearl just wants to get drunk and carry on with Earl (Gary Cole), while Tammy strikes up a tentative friendship with Earl’s son, Bobby (Mark Duplass).

Their eventual “rescue” comes from Pearl’s wealthy — and gay — cousin Lenore (Kathy Bates). But that doesn’t prevent law enforcement from catching up with Tammy’s destruction of the Cadillac and a jet ski.

Tammy’s response to every crisis is to make non-sequitur wisecracks while generally letting Pearl have her way. McCarthy has ditched the gross-out routines she’s utilized in other movies, but as a character sketch, “Tammy” is a botched portrait that bogs down in a moral morass.

The film contains an implied bedroom encounter, some profanities and sexual banter and pervasive rough and crude language. The Catholic News Service classification is A-III — adults. The Motion Picture Association of America rating is R — restricted. Under 17 requires accompanying parent or adult guardian.

NEXT: Alienated kids find friend from another world in ‘Earth to Echo’