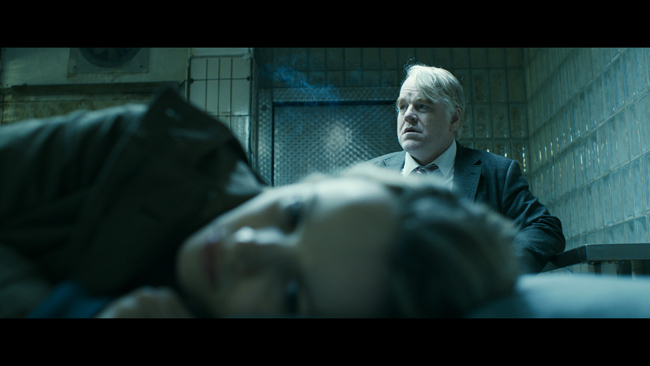 Rachel McAdams and the late Philip Seymour Hoffman star in a scene from the movie "A Most Wanted Man." The Catholic News Service classification is A-III -- adults. The Motion Picture Association of America rating is R -- restricted. Under 17 requires accompanying parent or adult guardian. (CNS photo/courtesy Roadside Attractions)

NEW YORK (CNS) — The extreme measures spies take to combat terrorism, and the moral compromises that go with them, are showcased in “A Most Wanted Man” (Roadside), an edgy adaptation of the 2008 bestselling novel by John le Carre.

Director Anton Corbijn (“The American”) has crafted a tense cat-and-mouse thriller set in Hamburg, Germany, the city where the 9/11 terrorists plotted their attacks. As a result of that, Hamburg is a focus of espionage for many Western nations, including the United States.

It’s a time-consuming and multifaceted operation. “Our sources don’t come to us. We find them,” Gunther explains. “When they are ours, we direct them to bigger targets. It takes a minnow to catch a barracuda, a barracuda to catch a shark.”

The other source, Annabel Richter (Rachel McAdams), is an idealistic immigration lawyer. Her new client is a shady refugee from Chechnya, Issa Karpov (Grigoriy Dobrygin). Issa has entered Germany illegally and may or may not be an extremist.

The plot thickens when Karpov reveals that his deceased father extorted a fortune, which was laundered and deposited in a Hamburg bank run by Tommy Brue (Willem Dafoe). Issa claims he wants nothing to do with this blood money, casting doubts on his evil intentions.

Whatever Issa’s motives, Gunther lays a trap, whereby Annabel persuades Issa to donate the money to Abdullah’s so-called charities. If Abdullah takes the bait, it could expose a wider terrorist network.

Complicating matters are the American spies lurking in the shadows, led by Martha Sullivan (Robin Wright). She wants in on Gunther’s plan, but has another agenda in mind.

The chase is on, and fans of le Carre’s novels will know to expect the unexpected. The picture’s pronounced anti-American bias and cynicism, however, may leave a bitter aftertaste.

PREVIOUS: ‘The November Man’ offers little cause for thanksgiving

NEXT: ‘How the World Was:’ A boy’s life in the Great Depression