‘The November Man’ offers little cause for thanksgiving 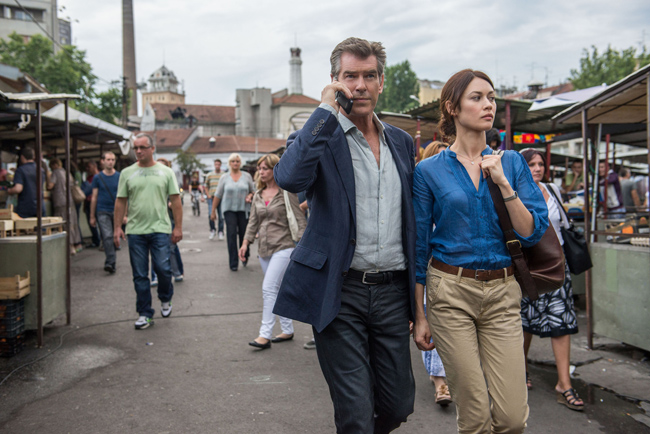 Pierce Brosnan and Olga Kurylenko star in a scene from the movie "The November Man." The Catholic News Service classification is O -- morally offensive. The Motion Picture Association of America rating is R -- restricted. Under 17 requires accompanying parent or adult guardian.(CNS photo/Relativity)

NEW YORK (CNS) — There’s not much cause for thanksgiving in “The November Man” (Relativity). That’s because the only thing out of the ordinary about this espionage-themed action flick is the level of visceral violence on display.

Director Roger Donaldson’s screen version of Bill Granger’s novel, “There Are No Spies,” follows the adventures of retired CIA agent Peter Devereaux (Pierce Brosnan). He is reluctantly lured back into the world of secret ops by the need to protect Natalia Ulanova (Mediha Musliovic), a source-turned-lover for whom he still carries a torch.

Natalia has been working undercover in the offices of Arkady Federov (Lazar Ristovski), the front-runner in the race to become the next president of Russia. There, she’s unearthed evidence of the lurid war crimes Federov committed during the conflict in Chechnya.

As Peter tries to get Natalia to safety, however, he’s confused to find himself at odds with his former colleagues, including trigger-happy agency assassin David Mason (Luke Bracey), who was once Peter’s trainee. The measures they take to thwart Peter’s extraction of Natalia leave him not only enraged and bent on revenge, but determined to follow up on Natalia’s quest to torpedo Federov’s candidacy.

Since Natalia’s clues point to a Belgrade social worker named Alice (Olga Kurylenko) as the one person who might be able to produce a witness to Federov’s atrocities, Peter and David are soon struggling for custody of her.

The bloodletting along Peter’s path ranges from skulls exploded by high-powered rifle bullets to major arteries slashed by knives. Add to that an explicitly portrayed encounter between David and a casual acquaintance — as well as Peter’s visit to a strip club to chat with a pimp who might know something to Federov’s discredit — and what you’re left with is a viewing experience that frequently plays on the lowest aspects of human nature.

PREVIOUS: Teen tearjerker ‘If I Stay’ slogs through the syrup

NEXT: In ‘A Most Wanted Man,’ compromised spies hunt very bad guys