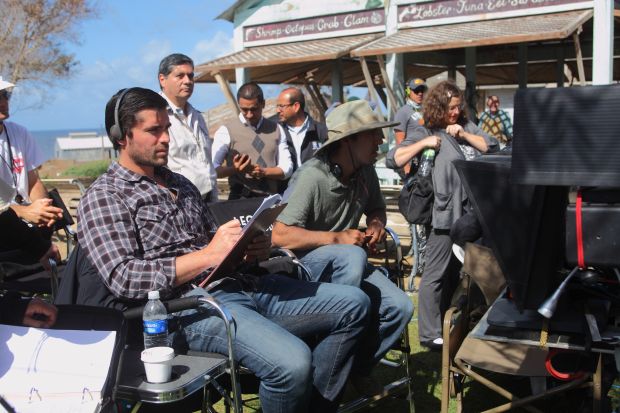 Actor and producer Eduardo Verastegui prepares for a scene in his new film "Little Boy." Verastegui says he hopes the movie will "inspire and heal" a "world in darkness." (CNS photo/courtesy Metanoia Films)

WASHINGTON (CNS) — The creators of the 2006 movie “Bella” have teamed up again to produce what actor Eduardo Verastegui calls “a mainstream, family-friendly, faith-based film that welcomes everyone.”

“Little Boy” is a film set in World War II-era California that focuses on the personal and spiritual struggles of a family’s youngest child who simply wants to see his father return safely from the Pacific theater. In the film, Verastegui portrays Father Crispin, a young, brusque and devout priest, perpetually clad in cassock and biretta.

“When Alejandro Monteverde wrote the script he came to me and he said, ‘This movie is designed to wake up the little boy that we all have in our hearts,’ because sometimes as we grow up, he falls asleep,” Verastegui told Catholic News Service in an interview.

“What I mean by that,” he explained, “is our capacity to love big, to forgive big, to do great things with your life” sometimes becomes dormant.

Little Boy, also known as Pepper Busbee and portrayed by Jakob Salvati, has a spiritual awakening and a strengthening of his own faith, at first.

For the child “to begin doing something great with his own life, he needs to hear a message,” which comes from Father Crispin, said Verastegui, explaining how Monteverde explained the priest’s relationship to the titular character. “So he’s going to be in Mass with the whole town, at the time. … He’s very sad because he wants to bring his father back from war and he doesn’t know how to do it.”

At Mass, the boy hears Verastegui’s character say: “If you have faith the size of a mustard seed, then you can move a mountain.”

“When he hears this, he runs to the market and steals a little mustard seed,” Verastegui laughed, “and now he wants to move the mountain, of course. But the priest, Father Crispin, explains what that actually means to him. And it’s just a beautiful journey how this little boy is trying to end World War II so he can bring his father, his best friend, back home alive.”

So begins Little Boy’s journey of personal growth through prayer and service to others by performing the corporal works of mercy, which he reads off a list instructing him to feed the hungry, visit the sick and imprisoned, shelter the homeless, clothe the naked and bury the dead.

“This message is what the whole movie is about,” Verastegui told CNS.

“With faith you can move mountains, and with love you move hearts,” he said, adding that as a filmmaker, he hopes when people see the movie, “they will leave not only entertained, but hopefully inspired to love more, to judge less, to forgive more and complain less and do the list (works of mercy). And I guarantee you, if we all did the list, we would make this world a better place.”

“Little Boy” is a faith-based story but is not meant to reach just Christian audiences, according to Verastegui. “This movie is for everyone. ‘Little Boy’ welcomes everyone. … I have shown the movie to so many friends from different belief systems and they all cry when they watch it, because who doesn’t have that little boy or little girl inside of them who wants to wake up?”

Cultural and personal inspiration running through this film is a central theme in the kinds of movies that Verastegui said he and Monteverde make through their production company, Metanoia Films. “We wanted to produce films that (have) the ability not only to entertain but also to make a difference in peoples’ lives. The first fruit of that effort was ‘Bella,’ a film that has changed so many lives, including my own life.”

The movie was about a young man’s efforts to convince a single pregnant woman to not go through with a planned abortion.

“The best part of Bella,” Verastegui said, “was not all the awards that we ended up winning, thanks be to God. It’s all the letters and the emails that we receive every day, even two today, from young women who were pregnant and scheduled to have an abortion and, by the grace of God, after they saw the movie changed their minds and kept their babies.

“More than 2,000 babies that we know of have been saved from abortion because of this little movie called ‘Bella.'”

Verastegui, a co-founder of Metanoia, hopes to see a similar reaction to his newest film.

“Right now, we are living in a world that is very divided, a world that is in darkness,” he said. “It needs a lot of healing and a lot of unity. I believe that art has the power to heal and bring people together so that we can all be united in the name of love, and I think that ‘Little Boy’ can accomplish that.”

“Little Boy” is expected to be released in theaters April 24 and also features actors Kevin James and Michael Rapaport.

PREVIOUS: Cutting the cord: A la carte TV on the way, but not to cable

NEXT: Movie review: The Lazarus Effect