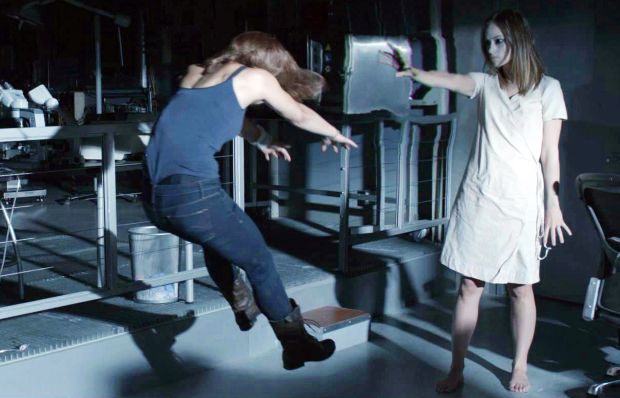 Sarah Bolger and Olivia Wilde star in a scene from the movie "The Lazarus Effect." (CNS photo/Relativity Media)

NEW YORK (CNS) — There’s not much new explained about the hazards of tampering with nature in the second-rate horror exercise “The Lazarus Effect” (Relativity).

As the film opens, the quartet have already gotten carried away with the implications of their work, and are busily attempting to jolt life into dead animals.

They score a twofer by restoring a dog to the land of the living while also curing his cataracts. No one, in the manner of Colin Clive’s Henry Frankenstein, announces, “It’s alive!” Instead, Clay reflects, “This might work!”

The pooch isn’t overjoyed with his jumper-cable “resurrection.” The resulting overload of brain chemicals gets every single synapse clicking along so well that hallucinations — and, inconveniently, telekinesis — result.

Even attributed to a canine Carrie, this remains the most boring power in all of horror filmdom, since making lab equipment fly around will never rise above a cheap special effect.

How much longer until these overgrown Doogie Howsers try to revive a person? Not long.

Opportunity knocks when Zoe is accidentally electrocuted during the attempt to revive another dog. Frank quickly rigs her up to the equipment, only to be startled when she bolts back into action.

Like the dog before her, Zoe 2.0 isn’t quite right, and is soon chasing her pals around the lab while dealing with the childhood trauma of having started a fatal fire. The fright factor consists of Zoe popping out of the shadows when she’s not reading minds or skittering down hallways.

Before her revivification, Zoe is revealed to be nominally Catholic. This means she reflects on her mortal soul after Frank teases her, “Two glasses of wine and the inner Catholic girl comes out.”

As limned by director David Gelb and screenwriters Luke Dawson and Jeremy Slater, Zoe’s bargain-basement theological exposition has little enough to do with the actual faith. She regards hell, for instance, as a personal creation in which one keeps repeating a painful moment from life.

For better or worse, though, such musings zoom past before the movie gets down to the genuine business at hand — to wit, an unconvincing portrayal of mayhem and death.

The film contains frequent action violence, some sexual banter and fleeting profanity and crude language. The Catholic News Service classification is A-III — adults. The Motion Picture Association of America rating is PG-13 — parents strongly cautioned. Some material may be inappropriate for children under 13.