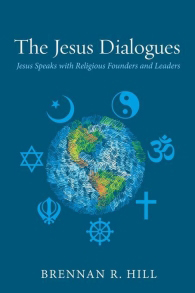 The year 2015 represents the 50th anniversary of the Second Vatican Council’s landmark declaration on interreligious relations, “Nostra Aetate.” This book is a most appropriate way for undergraduates and dialogue groups to become engaged with the fruits of the many dialogues between Catholics and representatives of other religions that have flourished on the local, national and international level since its promulgation.

Brennan Hill, professor emeritus at Xavier University in Cincinnati, uses a fascinating format for bringing undergraduates and dialogue groups into these ongoing discussions. He presents Jesus in dialogue with the founders and leaders, female and male, of the world’s religions.

The book begins with a dialogue between Jesus, Moses and Miriam — Moses’ sister and the namesake of Jesus’ mother, Mary — about Judaism and Jewish-Christian relations. While well-intentioned, this section contains a number of errors about the Hebrew Scriptures, which for Jesus and evangelists was the only Bible they knew, and about the New Testament. On page 17, for example, he takes the “lex talionis” (“an eye for an eye,” etc.) literally, though it is not used literally in the Hebrew Scriptures but rather as an affirmation of the principle of equivalency.

He portrays Jesus as the sole reformer of his time, though the Pharisees were a lay reform movement opposed to the priesthood, which they considered traitorous, since the chief priest Caiaphas was appointed by and answered only to Pilate. Thus, Hill misses the point that it was the chief priests, as all three synoptic Gospels make clear, who plotted against Jesus after the cleansing of the Temple (Mt 26:3, Mk 14:1, Lk 22:2). Hill could have profited had he consulted a biblical scholar for this section of his otherwise excellent book.

The second chapter is a discussion between Jesus, Muhammad and his wife, Khadijah. This is a spirited exchange that will disabuse readers of many misconceptions we Christians have about Islam. The author might have noted, however, that the Crusades were in essence a war of self-defense since Muslim armies had conquered Christian lands in North Africa and up the Spanish peninsula, on the west, and up to the very gates of Vienna, Austria, on the east. Throughout the book, the role and treatment of women in the various religions as well as Christianity is brought out and critiqued.

Subsequent chapters have Jesus in dialogue with Krishna and Radha (Hinduism), Buddha and Kuan Yin (Buddhism), Mahavira (Jainism), Nanak (Sikhism), Lao Tzu and Kuan Yin (Taoism), and Confucius and Madame Ban Zhao (Confucianism). A chapter that I found especially fascinating is that of Jesus in dialogue with leaders of various indigenous religions in the Americas, such as Sacajawea, Moctezuma and Atahualpa.

The book ends with an excellent chapter describing the what, why and how of interfaith dialogue. Here he mentions as role models such figures as St. John Paul II, Gandhi, the Dalai Lama and Abraham Heschel. He defines what dialogue should not be and what it can be, and the deepening of our own Catholic faith that can happen through dialogue with the religious “other.”

PREVIOUS: Who’d have thought M. Night’s ‘The Visit’ would be so funny?