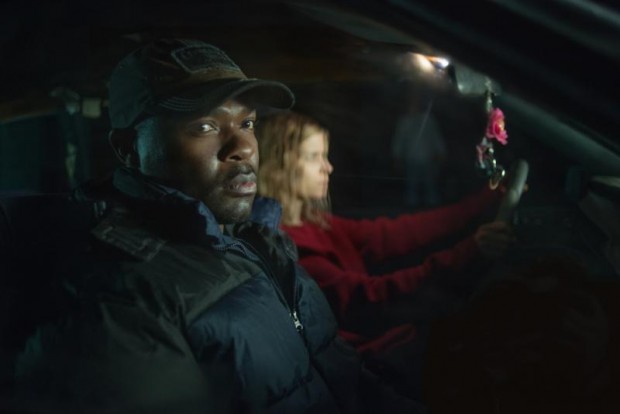 David Oyelowo and Kate Mara star in a scene from the movie "Captive." (CNS photo/Paramount Pictures)

NEW YORK (CNS) — Given the sensational nature of its fact-based premise, the hostage drama “Captive” (Paramount) would seem to have all the makings of a pulpy, ripped-from-today’s-tabloid melodrama.

Perhaps that lurid potential alarmed the filmmakers, whose agenda in mounting this screen version of Ashley Smith’s memoir “Unlikely Angel” is quite different and much more honorable. If so, they were driven too far in the opposite direction, with disappointingly dull results for viewers.

A drug-addicted diner waitress whose methamphetamine habit had already cost her the custody of her young daughter, Ashley (Kate Mara) was struggling to put her life back together when, in 2005, she suddenly faced an even more acute crisis than that generated by her dependency.

Terrified of her captor, yet not entirely unsympathetic to his troubles, Ashley scrambles to stay alive and makes some ineffectual efforts to free herself from Brian’s grasp. Partly to keep him occupied, but also hoping he’ll recognize the positive choices still available to him, Ashley winds up reading Brian passages from the Rev. Rick Warren’s self-help best-seller, “The Purpose Driven Life.”

While this is a documented part of Ashley’s story, its presentation in the movie comes across awkwardly and registers as a blatant example of product placement. As such, the sequence unfortunately tends to undermine the upright, God-centered values that director Jerry Jameson and screenwriter Brian Bird are clearly working to promote.

They’re gamely supported by the gifted principals, who turn in earnest performances. Yet Mara and Oyelowo’s best efforts can’t compensate entirely for the film’s sluggish pace or the confused, blunted impact of its outcome.

On the upside, the mayhem involved in Brian’s escape is portrayed with considerable discretion. Taken together with the general absence of problematic material in the picture as a whole, this understated approach makes “Captive” acceptable for most mature adolescents.

The film contains stylized but potentially disturbing gunplay and other violence, including the implicit threat of rape, narcotics use and at least one crass term. The Catholic News Service classification is A-III — adults. The Motion Picture Association of America rating is PG-13 — parents strongly cautioned. Some material may be inappropriate for children under 13.

NEXT: Movie review: The Perfect Guy